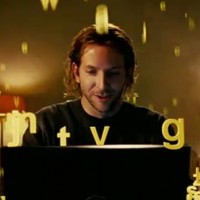 The big problem that I had with Limitless is that it is, for the most part, formless. It has some spectacular ideas that drew me in despite their reliance on that old “we only use 20% of our brain” myth, but then the movie doesn’t really know what to do with them. The movie starts with a bang, then holds it there; there’s an illusion of acceleration, of momentum, but ultimately fails to satisfy.

We follow Eddie Morra, a flailing writer who is devoid of any and all motivation. When his girlfriend leaves him early in the movie, he accepts it with the resignation of the inevitable. His apartment is a mess, he can’t be bothered to bathe, and he’s lucky if he’s able to put one sentence on paper before he’s calling it a day’s work. That is, until Eddie accidentally runs into his ex-wife’s brother, a shady bloke who offers our protagonist a prototype pill that unlocks the user’s full potential, allowing them to access heretofore deeply buried memories and thoughts; in practice, it makes you a kind of super-man who can instantly analyze complex mathematical figures, remember passages from books read long ago, and enables you to leap tall buildings in a single bound. Morra inexplicably neglects to utilize this final enhancement – perhaps the DVD’s deleted scenes will remedy this.

To be frank, Morra’s super-powers felt awfully gimmicky. I couldn’t help but think of it as a remake of Jim Carrey’s classic dramedy The Mask, only instead of a legendary and mystical prop used to change star Bradley Cooper, here we have a new-fangled designer drug. But seriously, I was waiting for Morra’s dog to get ahold of the drug and become the smartest canine in the world throughout the entire film. However, the difference between the two movies is that in The Mask, there is an element of motivation to drive the plot, however cheesy it may be: a love story, bad guys trying to get The Mask in order to fulfill their evil desires, and so on. Here, though, there is much less at stake. I mean, sure, there’s Morra’s increasing paranoia – a facet that is played up in the trailers, but not given much depth in the finished film. There are those who want to get the drug for their own gains, but usually not for explicitly evil purposes like world domination; instead, they simply want to play the stock market.

With white-collar villains, you get a white-collar movie. There are brief flashes of brilliance in the film, and I do mean that literally. When the drug really takes hold of Morra, he floats on a 100 mile per hour disembodied journey through the city of New York, zipping easily down sidewalks and through building and vehicles and finding himself entirely unsure of where he is or what he may have done. The moments are extraordinary, not just on a sugar-rush visual level, but because of the inventiveness behind them. It’s one thing to show a man wake up with no idea of what has happened last night (ahem, The Hangover), but it’s another thing entirely to see the scene from his perspective as he flies through time and space, seeing glimpses of insanity surrounding him, catching his bearings long enough to get into a fight in a subway, then fly forward once again.

Beyond that, though, there’s little to grab hold of. The other big name in Limitless is Robert De Niro, whose role in the film is surprisingly minimal. De Niro plays a wealthy businessman who worked his way to the top by clawing and fighting, both in awe of Morra’s seemingly effortless rise to fame and vaguely suspicious. This storyline, like all of the subplots that appear throughout the film (a rival has access to the drug, possible side effects of over-use, the murder of a model, etc.) is shoddily constructed and therefore uninteresting. There is no clear A-story, no overriding ideas to sell the movie, and while I respect the fact that the movie is committed to providing absolutely no moral to ground the narrative, it also makes the film feel somehow pointless. The only driving force for the protagonist is the need to continue taking drugs – and the only time that becomes problematic is when it serves the plot enough to make something (anything!) happen.

There is only one moment where there is any real sense of tension or danger. It’s another magnificent scene, one that almost works better on its own than it does within the context of the story. Some baddies arrive at Morra’s apartment with the express purpose of inflicting torturous violence upon him, and our hero is unfortunately unable to get to his secret weapon. It’s a deadly serious moment, one that the rest of the film fails to match, for the most part. Any other flashes of calamity are quickly forgotten or easily gotten past with little effort on Morra’s part.

I would not hesitate to say that Limitless is great fun, an energetic and sometimes dazzling film with a clever premise to get the wheels turning. But once the wheels start turning, they got nowhere to go. There’s nothing unifying to pull the movie together, which leaves the movie feeling like it was generated with a pitch (“Guy takes a drug, gets super-powers”) and then the filmmakers neglected to flesh it out anymore. There’s probably an argument to be made that this is manufactured, part of the concept, to show the character facing few challenges. If that was indeed the thought behind the movie, I understand it but can’t fully support it.

A stronger idea about what the film was trying to convey would have helped the movie out tremendously. As it stands, I would recommend catching the movie if you can, but my praise is, unfortunately, limited.

One Response to “Limitless”