Left By the Ship 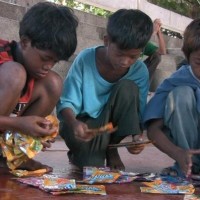 Left By the Ship

“There is nothing I want from you, except for you to know that I exist,” Robert, an Amerasian journalist says in voice-over. He is one of many offspring of Filipina sex workers who have borne children of American sailors. These children were left with their mothers to fend for themselves in the Philippines, often in poverty, with the knowledge that their fathers were living in comfort back home in the United States. Often, their fathers have other families back home and therefore deny these foreign children. Other times, the children have no idea who their true father is or even how to go about finding him. These unwitting participants in the sex trade grow up with half a family, with a fractured sense of identity, with a feeling of being incomplete or abandoned.

The implication is apparent that these men just don’t care. One child finds out who his father is and gets the opportunity to speak with him on the phone. When asked how he’s doing, the man says that he’s “fine”, a common response to such a question but one which seems coated in callousness after some sixteen years of absence. You’d hope to find that your father had been in a coma for ten years, then suffered amnesia and forgotten who he was… not that he had been living his life happily without his son in it. When asked to send an email, the child (named JR) happily agrees and crafts a loving draft with Robert’s help, expressing forgiveness for the great distance and gratitude for being acknowledged. After weeks and weeks of waiting, a response never comes. It’s easy to feel loathing for these United States servicemen in response to having quite literally abandoned their responsibilities, but the issue is not as clear-cut as it seems. The sailors warn each other not to trust the prostitutes when they claim to be pregnant or assert that they know who the father is – these women have to sell their bodies to make a living, after all, so the assumption is that they just want to get some of your money. Given that the film is told from the perspective of Amerasian children, that’s clearly not the case, but for a young man in a foreign country, it’s easier to accept the wisdom of comrades and wash your hands of the situation.

But this abandonment causes problems in the lives of the children. We also meet two girls, a teenager named Charlene and a younger girl named Margarita. Charlene’s father was black, a problem because the people of the Philippines are just as racist as everybody else in the world. Because her skin is darker than her peers’, she is ostracized. In order to make her daughter feel some sense of self-worth, Charlene’s mother goes as far as pawning her cell phone in order to buy nice clothing for a beauty pageant. It’s worth everything in the world to make sure that her daughter feels successful, pretty, loved. The pageant goes awry and the girl ends up forsaking the hard work that her mother put in to make her feel comfortable… by getting pregnant. There is no option for Charlene now because, as her mother says, “abortion is a sin.”

Margarita is similarly aimless. She lives with a stepfather in the Triangle of the city, basically a basketball court and public hang-out area. She does play with the other children and collects recyclables to scrape together whatever money she can for food, but otherwise her life is an empty one. Margarita has no sense of how to build a relationship with other people. When a kindly woman offers to take her in, the girl is a constant pain. She throws temper tantrums and makes messes and cries to be returned to the life she lived with her stepfather. That’s right: she prefers to sleep on concrete than in a house with a bed, prefers to bathe in a river – if at all – than to stay with a family that has indoor plumbing. Margarita is worse off than anybody else because she’s been abandoned by both her father and her mother, but it’s clear that this has had a huge effect on her psychological state. When speaking to the camera, she says that she knows she is ugly. Like Charlene, Margarita feels unloved and therefore unlovable.

The kids share common attributes: they are despondent, transient, lost. The United States has formally recognized the Amerasian children of American sailors who visited other countries, but this recognition strangely does not extend to the Philippines. The reasoning that the courts have given is that because prostitution is illegal in the country, they cannot rule in favor of the children – it would be akin to ruling in favor of providing funding to the act. In theory, the reasoning is sound; in practice, it unfairly leaves thousands of people stranded, people who had no say in the matter. Those who can prove their relation to an American citizen by blood can sometimes be granted citizenship status themselves, but the paperwork must be completed before reaching your teenage years, else the answer received amounts to little more than, “Too bad.”

“There’s some invisible force keeping us down,” Robert muses, as we see the faces of many more Amerasian children than the ones whose lives are documented within the film. Like gravity, it’s a force which keeps them tethered to their longing, as those around them spread their wings and take flight. Some men stare at the clouds or the moon, wishing they could touch them; others build airships to take them there. The only meaning Robert seeks to convey is that these Amerasian children do exist and they’re living their lives, trying to work through their pain. Left By the Ship shows just a handful of this group, but their number is great. So perhaps what is more important than setting foot on the moon is recognizing that you’re not alone in trying to get there.