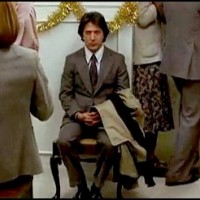 There are so many ways that Academy Award flypaper like Kramer vs. Kramer could have crumbled.

It’s a movie about a man named Ted (Dustin Hoffman) who is a workaholic and rarely has time for his family. When he arrives home late one night, his wife Joanna (Meryl Streep) tells him that she is leaving him… and also leaving their six-year old son behind as well. It’s a stale premise, and you can likely see the turns coming from a mile ahead: Ted has to learn how to be a better parent to his son, they forge a strong relationship, mother returns to claim custody of the child, messy court battle ensues. When we see Joanna watching her son from a shop across from his school, there’s a sudden sinking feeling in your stomach. Oh god, she’s back. We already know where this is heading.

It’s not that these prognostications are necessarily wrong, so much as that they don’t play out in the manner that we’re liable to expect. The film takes a remarkable turn by treating its characters as real human beings. So instead of being a story about an angelic father who loves his son facing off against a vindictive, devilish mother – or the other way around – it is instead a story about two adults with varying levels of emotional distance, both of whom love their child intensely. It’s tempting to take Ted’s side, since we see things from his perspective throughout the majority of the film. His wife leaves for more than a year, and he naturally fills the void left. But we mustn’t forget that he was “gone” for far longer than she, though not in as permanent a sense. He had been dedicated to his career at the expense of his family. He failed to communicate with his wife, as evidenced by the way he ignores or belittles her explanation for why she must leave at the start of the film.

So both parties have made mistakes. By the film’s climax, they’ve both acknowledged their own shortcomings. The court battle for custody which ensues has become a monster that neither can control, each party’s attorney going for the jugular. These are perhaps the most powerful scenes in a film which has already had some very moving moments. The couple could not stay together, not because they’ve come to despise one another, but because they had different ideas about what the relationship should be which were ultimately irreconcilable. The questions the lawyers ask are meant to discredit the other party, to show that one or the other is unfit to care for the child, but there is no way to settle that. As Joanna says on the stand, “I’m not saying he doesn’t need his father.” Ted looks at his ex-wife with sadness, not bitterness, mouthing “no” when his lawyer tries to get Joanna to incriminate herself. Joanna’s eyes quiver with tears as her attorney tears down the man she was married to for nearly a decade. When their mutual friend Margaret (Jane Alexander, just as spectacular a performer as the two leads) is interrogated, she has sincerely positive things to say about both Ted and Joanna.

I feel like this courtroom drama is the crux of the film, but that’s not to discount the action that comes prior. The slow build of the relationship between Ted and his son Billy overcomes the initial cliche – father overwhelmed by different pressures, burns the toast, doesn’t know what grade son is in, etc. Or perhaps the cliche is set-up, which the movie seeks to topple. Ted initially does not know how to deal with his son’s grief; there are times when he himself rages out of not knowing how else to respond. As time passes, the two spend more and more time together. They talk, they play games, they enjoy the company of one another. It gives Ted the ability to be less prideful and angry at what has been lost – he instead becomes increasingly grateful for what he does have. It is through spending time with his son, communicating honestly for the first time in years, that he begins to understand what his wife lived with during their marriage. And wow, do Hoffman and the boy have chemistry together: I can’t think of anything more gorgeous and heartbreaking than a scene where the two make breakfast in silence. Or how about the moment where Billy, lying in bed and lit only by the dim light of the hallway, tells his father that he loves him? Those are amazing moments.

There is a nude scene, however, which seems gratuitous. I can’t figure out how it was important to the plot. I also do wish that Joanna’s perspective had been more fully developed, although I can see how it may have ruined some of the fragile subtlety of the court scenes. The very final moments, too, although satisfying, were a bit cloying and too easy a resolution. Which is why I say that I would have liked to have seen more from Joanna’s point of view. She says that leaving her child was one of the hardest things that she has had to do, and I believe that she feels that way, but it would have been nice to have been privy to that emotion at some point in the film. Streep is magnificent, of course, and she paints a picture with her words that makes the ending stand, but it felt sudden and surprising – not out of character, really, but implausible.

Kramer vs. Kramer is a confidently small picture. Its story is delicate and contained; it does not require characters yelling at each other or swelling musical cues to sell the poignancy of its drama. It treats its characters with respect and allows them to act naturally (rumor has it many of the scenes with Billy were in fact improvised). Though the mechanics of the story are threadbare and I have some reservations about the way that a few issues were handled, the vast majority of the movie is sure-footed and strong.

One Response to “Kramer vs. Kramer”