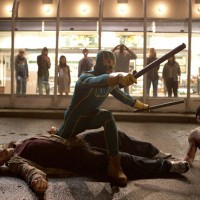 I am a huge Nicolas Cage fan, so I’ve been waiting for Kick-Ass for a long time. When people asked me what it was about, I would give them a pretty standard synopsis: “It’s about a kid who decides to become a super hero even though he has no superpowers.” After I saw the movie for the first time, I still thought that that was pretty much what the movie was about. A second viewing gave me a new perspective.

It’s not that that little synopsis isn’t something that happens in the film – it is. Average kid Dave, who “isn’t even the funny one” in his group of friends, has an epiphany one day while hanging out at the comic book shop. Why hasn’t anyone ever tried to become a super hero? Of course, the answer is obvious and is quickly pointed out by his friends: because they’d get their ass kicked. But Dave has gotten the idea stuck in his head now and it will be hard to dislodge. He goes online, buys a green scuba diving suit, and becomes Kick-Ass.

It’s slow going at first, as Dave tries to warm himself up to the idea of doing cool super hero things. It’s hard, though, because as we’ve already determined, he’s a pretty normal guy. Leaping tall buildings in a single bound is entirely out of the questions. Hell, getting a cat safely to its owner can be a daunting proposition. Still, he is determined. Dave finally gets a chance to take down some actual baddies and gains some internet notoriety. However, his notoriety as a super hero also gets the attention of a New York mob who think that Kick-Ass has been killing their men. Enter Hit Girl and Big Daddy – and with them, the uber-violence that the general audience trailer didn’t lead you to expect. This DID come from the same mind who brought you Wanted, after all.

The violence (and the language) are the two things that the movie’s critics will latch onto, especially since it involves a young girl. I’m not usually one to consider the moral implications that a movie’s message will send into the real world, so I’m not too worried about it here. However, I do think that if the message that ‘violence is good’ seeps into the real world, then the film’s viewers are missing the point. Without getting into spoilers, suffice it to say that the characters’ motivations are often hazy – although there is a clear good and bad guy from Dave’s point of view, looking at the story from outside the he-roes tinted glasses (see what I did there?) of the narrator may give you an entirely different outlook on what is going down. Take Kick-Ass himself, for instance. Yeah, he’s interested in helping people out because he gets pissed off when he sees other people that are content to just watch crimes in progress. But how much of his motivation also comes from the need to look cool, to be more than “average”, or to get the girl?

Of course, if the action pieces look unbelievably awesome, I’d hand the praise to the excellent soundtrack. I’ve seen the movie twice now and I honestly think that the soundtrack is probably the strongest thing about the movie. Every scene, the music works itself up to make for greater excitement. If it’s not the score, then it’s carefully chosen tracks (e.g. “Bad Reputation” during one shoot-out) to really match with the action. It’s a sugar rush, I swear, but it’s perfect. One of the best moments comes when Dave as Kick-Ass first approaches some evil-doers in a parking lot. Listen to the music here, the rising heartbeat of the score. This is the action theme that Dave wants to hear behind his feats. Remove it, and there’s just a kid in a green wetsuit approaching two thugs in a parking lot.

The actors are all pretty likable, too. Of course Nicolas Cage is wonderful, and his interactions with his daughter (Chloe Moretz) are among the best scenes in the movie. Aaron Johnson, who plays Dave, has managed to capture the geeky yet lovable aesthetic of your Tobey-Maguire-as-SpiderMan and creates two different characters in his super hero persona and his normal alter ego while capturing similar character traits in each persona.

The one real problem with the movie, I feel, is in the movement. Kick-Ass essentially has a single instance of celebrity and suddenly becomes world-renowned as a crime fighter. The mob has reason to believe that he’s behind the murder of many of their associates, but as far as the mainstream media is concerned, Kick-Ass has really only done one thing. And yet a whole marketing machine has grown out of the character, perhaps a commentary on the exuberant merchandising that goes along with blockbuster movies in this day and age or some such stuff? Either way, it’s potentially awkward but the movie skillfully distracts us from realizing it by showing Dave responding to emails from fans and, of course, by showing the action sequences that the public never knew about.

It’s also pretty clear that Dave’s running narration/commentary was pretty much made in the editing room. Sometimes the things he says don’t mean a thing, yet they way the lines are delivered – in combination with the powerful score – make them seem important and weighty. The most glaring instance of this comes when Kick-Ass is attempting to jump from the roof of one building to the next during his initial training. “I called it training,” Dave intones, as we see him looking over the edge at the sharp drop to the alley below. “But if you called it fantasizing… it would have been hard to argue.” The long pause between the first phrase and the weird emphasis on the word “you” makes it easy to forget that this is all one sentence. Read it together like this: “I called it training, but if you called it fantasizing, it would have been hard to argue.” He’s pretty much saying that his training was limited and amateur. But on-screen, the music is adrenaline-soaked and rising fast. Kick-Ass has a look of determination on his face, he’s clenching his jaw, he’s racing toward across the building, readying himself to jump the gap. It makes you forget that Dave has pretty much already told us what will happen.

But, again, the skill of the filmmakers in combining the action with the soundtrack makes it all too easy to just go along with the ride and ignore the bumps in narration and story arc. It gets where it needs to, what needs to happen happens. It’s beyond energetic, it’s bold, it’s bright and wonderful. Altogether, Kick-Ass is a pretty great movie. It may not be leagues deep in pathos (not that it’s missing it completely), but it makes up for that with its boundless optimism and naivete. Wonderful stuff, for sure.

I can’t leave the review without saying this…

I know that it was stated pretty clearly by Cage’s friend Marcus, but it still managed to pass me by after my first viewing of the movie. It’s easy to imagine what Hit Girl and Big Daddy are doing as being something that super heroes would do. Dave, certainly, sees them as fellow super heroes and I know that that is how Mindy imagines herself when she is in costume. Again, though, Marcus lays it out for real when he calls it vigilante justice and “mass murder”. Big Daddy’s entire motivation is revenge. He is not trying to save people because he is committed to the cause of righteousness – he is on a revenge kick, with the goal of killing every person who works for Frank D’Amico. He has trained his young daughter to kill people – to kill people! – without worrying about the fact that they may have had families themselves, they may not have been directly involved in her mother’s death. Big Daddy tells his friend Marcus that he “turned it into a game” for his daughter. Later on, when we see the action from Hit Girls p.o.v. and it literally looks like a video game, this comparison should come into full view. The violence that the father-daughter team doles out isn’t righteous, it should not be emulated. It is driven by a personal vendetta – and no matter how likable Nicolas Cage’s character seems to be, no matter how adorable Chlore Moretz’ swearing is, the fact remains that their crusade is driven by some seriously screwed up motivations.

Dave wants to see it as black and white, good versus bad. But there are shades of gray everywhere. Marcus is on his friends’ side, sort of, but he still works for a police chief who is known to be corrupt. It’s not as easy as it seems. Perhaps part of the movie’s flaw is in not addressing these things more obviously, for covering up the moral reality with catchy music. But then again, maybe that’s exactly what Dave is doing – covering up the reality with colorful costumes.