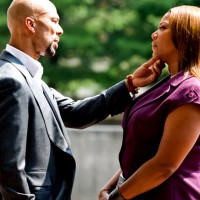 There’s nothing too surprising about Just Wright, which is a shame. It’s endlessly pleasant, so much so that even the “villain” (as it were) is treated with respect and love before the film’s end. It’s quite clear that this lack of any real driving force behind the plot is part of what makes the film fail, but the gentle demeanor of the leads aids in keeping the movie afloat.

The movie is about Leslie (Latifah), a physical therapist who is obsessed with the New Jersey Nets and their star player Scott McKnight (Common) especially. The two inexplicably meet at a gas station and immediately fall in love. Well, not so much, but it’s not just the trailer or the poster that give the viewer that impression. They smile at one another like goofy children, they look longingly into one another’s eyes. Of course, there’s bound to be some sort of friction that will prevent their relationship from taking off immediately, and that friction comes primarily in the form of Leslie’s superficial friend Morgan, who seeks out McKnight like a shark goes for blood.

So Leslie, who is a wonderful woman, and Scott, who is a perfect gentleman, spend the movie dancing around one another. Roger Ebert’s review praises the movie for having “detail and actual dialogue”, as he believes that it helps the growing relationship maintain a sense of reality. I’m all for realistically built relationships in film, but the formulaic elements are much too striking, and the movie suffers from some awful pacing that makes it sometimes impossible understand how much time is supposed to have passed. There are passing references to the basketball season, but without them the entire movie might have taken place in the course of a few days. One scene in particular – and maybe it was intended to be comedic but missed its mark – has McKnight commenting on Leslie’s sneezing, saying that she might be getting sick. Cut to her lying on the couch, deep in the throes of illness, as he tries to comfort her with soup.

That’s just one scene, but the movie falters many times with its pacing as the basketball player’s injury all but disappears after what seems like not too much work. “You’re going to hate me when this is over,” Leslie says at one point, but the movie doesn’t exhibit any reason why he ought to. McKnight’s relationship with Morgan and his tumultuous career with the Nets after his injury are both very briefly considered, but end up taking a backseat to the two leads sharing time together.

Which is fine. The actors share an immediate chemistry and it’s hard not to root for both of them, especially as everybody around both characters are constantly lavishing them with compliments for what great people they each are. There’s one pivotal scene wherein the two soon-to-be lovers stay up late at night playing a piano together. It’s amazing for being both the best and worst scene in the entire movie. On the one hand, the way the actors exhibit a playful affection toward one another until the moment where it becomes clear that McKnight has suddenly seen his duet partner in a different light… well, it’s a very strong moment, one whose emotional weight helps pull the movie out of the monotony of routine it had been stuck in before that. However, it’s also maybe the most poorly edited scene in the history of film: the camera cuts back and forth and from close-up to long shot with no rhyme or reason. It’s a testament to the strong emotions in that particular scene that the patently bizarre editing wasn’t enough to destroy the moment altogether.

And then the movie throws in secondary characters to stand in for one scene, like a guy named Paul who is apparently important in Leslie’s life somehow but is never seen again. Or late in the film, when she eats lunch with a few of her friends from the physical rehabilitation clinic that she works at regularly. They gossip and joke with one another like great friends, but we are never introduced to them and their existence is soon forgotten.

In this way, the movie is extremely bad. I feel like it would be easy to have a field day with an MST3K-like viewing of the film. Just Wright doesn’t rely on formula, it desperately clings to it as a way to keep the plot moving forward. It’s such a poorly constructed film. But the overwhelming likeability of the leads is a major selling point. Their romance is derailed by so many inauthentic contrivances, but the times when they are together, smiling with one another and talking about the things that make them happy, are when the movie works best. Any time they are alone or with other people, the film drifts much too close to being awful.

Altogether, the movie works – but only just barely. It’s so cheerful and enjoyable that it compensates for being terrible in most other ways. I feel comfortable saying that I liked Just Wright, and given all of the things that were working toward against it, I’d say that that is a major accomplishment.