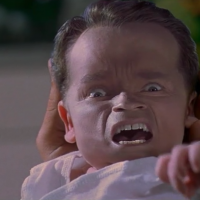 Junior is kind of the perfect mainstream comedy, combining hilarious and unprecedented observations regarding the difference between women and men, the subtle wit of gay panic, poignant scenes of a man dressed up as a woman, tasteful fat jokes, and a healthy dose of nightmare fuel. Directed by Ivan Reitman (Ghostbusters), the laughs begin from the first scenes as we are introduced to reproductive biologists played by Danny DeVito and Arnold Schwarzenegger. After the FDA passes on their experimental fertility treatment, the pair pull a Rise of the Planet of the Apes and decide to start testing on human beings anyway. And since this treatment is also magic, they’re able to use it on Arnold and let the hilarity expand with his waistline.

It’s clear that Schwarzenegger is not fit for this role. I understand the concept, of an actor known for his machismo, being placed in a more feminine role, and I recognize that it’s totally genius, but the man isn’t able to bring much to the performance. He lumbers around awkwardly, and the more serious the story gets the more labored his acting becomes. The times when Arnold has to pretend to be a scientist are among the most grating, though far from the most off-putting. I can sort of smile at the thought of Schwarzenegger playing Dr. Alex Hesse, even if it is as ridiculous as Tara Reid playing an anthropologist. What’s more disturbing is when, in an effort to conceal his affliction from a fellow scientist (Emma Thompson), he rationalizes his vomiting and sweating as the effects of a disease which causes “fatness”. At this point in the film, neither Hesse nor Dr. Arbogast (DeVito) have any intention of the pregnancy lasting more than a couple of months, so the ruse doesn’t seem designed to head off suspicion about Hesse’s weight gain. No, the film makes it clear from where this lie sprang: Hesse sees a couple of fat women walking by. Can you imagine being one of those actors?

There are many other disturbing moments. There’s a montage late in the film that goes on for far too long, wherein Hesse dresses up in drag and stays at a home for pregnant women. They show him laughing and doing calisthenics and fixing his hair with the other girls – all extremely funny, since any time a man wears a woman’s clothes, it’s a laff riot – but it becomes kind of bizarre by how long the montage continues. You get the feeling that Hesse spent a great deal of time here, really became a part of this tiny community; he begins the montage unable to put a baby doll into a diaper without slamming its head onto the table, but by the end he’s swaddled the doll with ease. And this is all before Dr. Reddin (Thompson) shows up to approach the incognito Dr. Hesse, now in his eighth month of pregnancy, with the expectation of sexual relations. The film leaves the actual act up to the viewer’s imagination, which I see as a real failure on Reitman’s part. What’s the point of even making the movie if you’re not going to show a woman getting it on with a pregnant man?

All of that is suitably bizarre and kind of leaves you feeling grimy afterward, but it pales in comparison to an early scene between Drs. Hesse and Arbogast. In order to kickstart the pregnancy, the pair steal a human egg from a cryogenics lab – easy enough. When it comes to fertilizing the egg, they need a sperm sample and so the film cuts to Hesse exiting a bathroom with a cupful of ejaculate. It’s for science, jeez! That’s not even the worst part. The two scientists watch the egg being fertilized through a microscope, and that’s when Dr. Arbogast says to his colleague, and I am quoting this to you verbatim, “Strong swimmers. Big load. Way to go.”

Ugh. That’s the best word to describe Junior. There’s a running gag wherein the ex-wife of Arbogast is also pregnant, having been knocked up by a member of Aerosmith. The movie seems to literally pause for laughs, a fact which is even more apparent when there are none to be found. I was frustrated also with Dr. Reddin, a perpetually clumsy woman who was no doubt written that way so as to appear to have some kind of foibles. These are minor grievances, though, when compared to the cheap ways in which Hesse begins acting more woman-like as his pregnancy progresses; his actions seem scripted by somebody who has only ever seen a woman in movies like this one. He complains about being lonely, ain’t that just like a woman? He fusses over what to wear to a high-class event, cries at fabric softener commercials, scarfs down franks in a blanket like the world was ending. Hahaha, women be gobblin’ franks – it’s so true!

When the movie isn’t making fun of women, it’s putting the two men in a scenario which makes them look like a gay couple. Much as being a woman is inherently humorous, being gay is hysterical. Watch Arbogast’s ex-wife faint in horror as her husband touches another man’s stomach. Watch the waiting room stare in disbelief as Hesse screams at his partner, “I want my baby!” By the way, “partner”, you get it? ‘Cause of gay! And occasionally, just for kicks, there’s something like the scene where Hesse goes to a Big & Tall clothing store to buy larger clothing, being encouraged by a rotund man to gain more weight. One moment where Hesse and his partner’s ex eat huge portions of all manner of food may be the stand-out moment, successfully straddling the line between a joke about women and a joke about fat people.

I guess there’s some pathos in Hesse’s demands to have his baby, and the affection that grows between the two scientists over the course of the movie is suitably dramatized. When not being pointed at and mocked, their relationship may be the strongest thing that the film has going in its favor. They start out not really caring much for one another, making it something of a meaningful thing when Arbogast later tells Hesse, “It’s my baby, too.” This is pulled off with so much more finesse than the lazy pairing of Hesse and Reddin, complete with ridiculous argument-which-breaks-them-apart and sudden-understanding-which-brings-them-back-together-again.

But overall, Junior is a slight comedy which tries too hard while aiming far too low. With nothing genuine to say, it’s clear that the movie started from a one-sentence premise and was cobbled together around that. It might not have even been a full sentence, really.