It’s Kind of a Funny Story 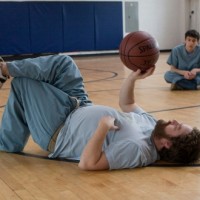 It’s Kind of a Funny Story

I never would have sought out It’s Kind of a Funny Story. In fact, when it was first being talked about and the trailer emerged, I wrote on Flixter that I couldn’t think of anything I would want to see less. Part of it is the sappy premise that the trailer suggested – a needy teen locks himself in a hospital with a group of headcases, learns, laughs, loves. Another large part of my reticence toward the film is my disdain for the film’s comic relief, Zach Galifianakis. I don’t really know where my antipathy for Zachy G. came from, except maybe for the fact that everybody else began falling in love with him. When people begin feeling strongly about something, it tends to push those in the middle toward extremes. The same thing happened with Slumdog Millionaire, which I thought was just okay, but in the face of the masses who were falling over themselves to praise it, I came to despise the film. Yes, I would never have sought out It’s Kind of a Funny Story if it were not for my friend Caleb who suggested I give it a shot:

“I just watched this tonight, and I was blown away with its effect on me … The movie helped me in a lot of ways personally. It’s very effective, and I think you may like it as well just cause I know you can appreciate a good film.”

So, against my better judgment, I decided that I’d concede to the suggestion of a good friend and put myself through a viewing of the film… and I’m pleased that I did so.

I’m not here to say that this is a five-star film because it is not. Much as I’d expected, a lot of the movie is kind of sappy and falls into terrible mental-ward cliches, as depressed smart-kid Craig finds ways to touch the lives of everybody he comes into contact with while simultaneously being taught about life himself. He lives, he laughs, he loves. He has a perfunctory relationship that builds with a girl who is also staying at the hospital, but their relationship – and her character entirely – is so flimsy that it could be (and probably should have been) cut from the movie entirely without anybody noticing a significant change. Further, I spent a lot of time, especially nearer to the beginning of the film, comparing the dialogue in my head to that of Juno screenwriter Diablo Cody. Too often Craig talks to the audience, trying to sound cool and detached, but it ultimately feels scripted. Add to that the fact that our hero’s complaints seem so childish: watch him lash out at his father for working, or decry his sister for being a child genius (although what she’s done to earn that title is not elaborated on – aside from the fact that she wears glasses). These things all combine to leave a bitter taste, the feeling of a movie trying much too hard for much too little effect.

But suddenly I realized why the movie does work. It came in a scene where Craig meets with Dr. Eden Minerva (Viola Davis), and she asks him what would happen if he failed to apply for a prestigious scholarship that his father had been pressing him to focus on. “What would happen?” Craig asks, and the movie enters his brain-space for a few moments. Cutting from scene to scene, the boy relates the awful downhill spiral that his life would become if he couldn’t live up to his father’s expectations, a panicked description of the mess his life would become until he wound up stuck in a hospital with the mentally disturbed by necessity rather than choice. As the camera zooms out on Craig’s face once again, he simply sighs: “I don’t know.” All of that anxiety was a glimpse into the head of this character. As an adult, it’s easy to see the issues driving Craig’s depression – girl troubles, the pressure to be smart, overbearing/inattentive parents, etc. – as ultimately silly. Man up!, you might say. A great review at www.goatdog.com emphasizes this point: “Someone in his 30s or 40s might laugh at the idea that a summer school program is worth killing oneself over, but that person is looking at things from a completely different perspective.”

The movie repeatedly hits the right notes with regard to Craig’s depression, showing how dismal his outlook on life is and how nobody seems to understand it. A commenter on the A.V. Club review of the film dismissed it, citing a line wherein one of Craig’s friends tries to empathize by saying, “I get that depression stuff sometimes, too.” The commenter was trying to say that the movie was selling this as a serious attempt at characters relating to one another. I thought it was pretty clear that Craig’s friend absolutely could not relate, hence the half-hearted attempt at empathy. Or how about another moment involving Dr. Minerva, as Craig relates his fears and struggles. She laughs at him – she laughs at him! – and tells him, “There’s a saying that goes something like.. God grant me the serenity to accept the things I cannot change, courage to change the things I can, and the wisdom to know the difference.” This pre-packaged fluff is useless, and the blank stare that Craig gives in response is a perfect summation of how much help platitudes like that can provide.

The only way that Craig is able to overcome the immense pressures that are weighing down on him is not through the aid of the hospital staff, but instead by seeing the things torturing those around him. Yes, that’s kind of lame. But it also works. It’s hard to imagine that a life change that drastic could be found over the course of five days, but Galifianakis (who is wonderful in this movie, by the way) sells it when he tearfully asks Craig why he is so down on himself. If he had the same familial support, Galifianakis says, he would “just live”. It’s a tender moment, though the issues that are affecting Zach’s character are not expounded upon quite enough. Maybe that’s okay, because even though the movie is populated with an array of colorful characters, it is ultimately about Craig himself. I think we get a pretty good idea of what Craig is dealing with, and though it’s distressingly quick, his journey from self-deprecation to self-actualization is actually handled well nonetheless – and his final monologue is, in my opinion, kind of fantastic.

It’s Kind of a Funny Story is a fine little movie, which suffers from being too contrived and getting a bit loose with its plot devices (there is a point where the moral seems to literally be “you can’t be happy unless somebody is in love with you”), but it’s ultimately saved by an understanding that sometimes it’s the little things that build up and pull you down. You think that because they’re little things, they are things that you should be able to brush off and move past, you think that other people will laugh at you for worrying so much. I was convinced that the movie had an understanding of the mental state of its central character, even if it maybe didn’t understand as well how to build characters that worked well together. That alone left me feeling pretty great about the movie as a whole.