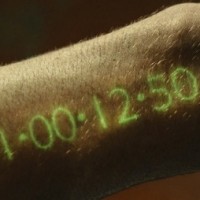 I’ll always have something of a gentle fondness for the work of Andrew Niccol based solely on his having written the excellent Jim Carrey vehicle The Truman Show, and to a lesser extent the very good Nicolas Cage vehicle Lord of War. Nevertheless, the film that his most recent outing reminds me of most strongly is the ill-fated Cyndi Lauper/Jeff Goldblum psychic comedy Vibes. I say this not because the plot of the two movies have many similarities – some might even say none at all – but instead because it’s very easy to imagine that 2011’s In Time will quickly be lost to history, a curio for some future Letter Game but little more. If it weren’t for the value of Justin Timberlake as star, a film this gutless would usually see a January release date.

The film is set in a parallel universe where human beings have been genetically altered so that they keep a running digital clock on their arms. Currency has been replaced by time, so that the richest of the rich can live for hundreds of years easily, can literally become immortal; meanwhile, those in the ghetto live day to day. Do you get it? The time motif is used primarily for lazy jokes involving common sayings. “I’d say your money or your life,” Timberlake says while holding a woman at gunpoint, “but your money is your life.” Oh, how clever! Almost as clever as the richest neighborhood (“time zone”, as they’re called in the movie) being named New Greenwich. The conceit is rarely used in any interesting way; it is simply a substitute for money, with the twist being that you immediately die if you run out of money in this world. There is some intrigue in the fact that class differences are evident by how quickly people perform tasks, e.g. Timberlake’s character is often running because of his lower status, but this idea doesn’t get developed beyond a few one-off lines of dialogue. Beyond that, it’s largely an excuse for a hundred variations on the phrase “I don’t have time”.

The release of the film currently is fortuitous due to the heavy presence of “Occupy Wall Street” protestors in the news, people who are upset over the wealth disparity in the United States. They pit themselves as the 99% versus the 1% of the wealthiest people in the country. Will Salas (Timberlake) would likely join their cause happily, painting himself as a modern day Robin Hood. Multiple times throughout the film, characters ask aloud, “Is it stealing if it was stolen already?” Nobody responds to this rhetorical question, but I have to wonder how the idea was generated that time had been stolen in the first place. Will recruits idealistic Sylvia (Amanda Seyfried) to join his crusade, and the two rob banks with gleeful abandon. They think that what they are doing is right, even as others express concern that their actions will only destroy the economy. Indeed, when people are given additional time, they no longer feel inclined to go to work.

It helps their case that there is a true shadow government controlling the cost of living, forcing prices up on a daily basis. There’s not much argument over whether those in power are evil when they readily admit to intentionally keeping the lower classes down. Of course, this also makes the political thriller aspect of the film less than compelling. What we’re left with is an action flick of garden variety – complete with car chases, jumping over staircase banisters, kidnapping, gunplay, you name it. There’s even a ridiculous arm wrestling sequence stolen straight out of Over the Top. This last item would be awkward enough on its own, even if it weren’t set up previously with a bit of transparent foreshadowing.

The mechanics of the plot match the specifics for absurdity. There are multiple times when characters’ arm-clocks count down to just a few seconds before they are miraculously saved, so much that it becomes difficult to trust the motives of such scenes. And of course, on each of these occasions, as in any film which has a countdown-clock-on-a-bomb, the final few seconds stretch on for eternity when the characters are important enough to survive. Late in the film, there’s a change in who has the upper hand which the film makes no attempt at explaining. Also, Will’s father is mentioned repeatedly, giving the impression that he may become important to the story somehow, but this never comes to more than the occasional reference. “I knew your father,” the sinister TimeKeeper tells Will. So?

There are hints that the TimeKeeper (Cillian Murphy) is a much more rounded character than a cursory glance might lead you to believe. Yes, he moves with the methodical determination that a brilliant detective hot on the trail of a criminal usually does in the film universe, but the relationship he had with Will’s father and the suggestion that he himself rose from the ghetto, only to choose a career which found him preventing others from doing the same, these are kernels of excitement. A better film might have wrung something out of this, given the TimeKeeper a central role. In Time, however, is happy to relegate him to standard villainry. Nothing comes of the clues that are dropped, and the character is ultimately dispatched thanks to sheer stupidity.

I don’t know that In Time can be considered bad, so much as just lazy. The continuous references to time are cheap, the resolution of the central narrative is sketchy, the relationship between Will and Sylvia is forced. With that said, the film could have excelled by providing gripping action sequences, but the few big action setpieces that exist are not handled in a manner to provide optimal excitement or tension. In the end, the movie is simply bearable, yet forgettable.

If you’re interested in seeing In Time, I’d suggest doing it now because before long you may not remember that it even existed.