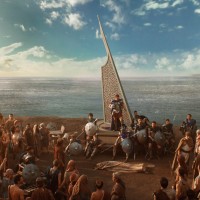 Beginning with his spectacular debut The Cell, director Tarsem Singh’s work has often been given a cold shoulder for relying on style over substance. Yes, the images on-screen are beautiful but what use is that if the story itself isn’t logical, twisting, surprising? In actuality, Tarsem’s goals are often less to create an intricately plotted whodunit than to create a broad story that the viewer can acknowledge and follow, enough to keep you in the world and moved by the imagery once you’ve “bitten the pill” (his words, not mine). There are a lot of critics who would contend that the director’s latest film, Immortals, fails at even this. It’s true that there are cut corners and unclear motivations on behalf of some of the characters which can tend to take the viewer out of the action, but the central story is much simpler to follow: a man named Theseus (Henry Cavill) must find a hidden weapon with supernatural powers in order to stop the evil king Hyperion (Mickey Rourke) from destroying all of Greece. These broad terms are the real story. In an interview with MovieLine, the director noted the concessions he had to make in order to appeal to a mainstream audience: “It was going to be a post-apocalyptic film, I was going to make this much like Romeo + Juliet in Mexico. It was going to be with a rector city, the Renaissance. We started from that and they said, no — people right now want to see these things, can’t you just pretend it’s Greek?”

So what has been released is something of a bastardization of Tarsem’s original concept, changes which may be a large reason why the film’s narrative edge feels dulled. Not a true retelling of a Greek myth, the movie does its best to blend together a 300 style war movie (the advertisements weren’t shy about the fact that this film shares a production team with that one) with the fantastical world of a Clash of the Titans. This doesn’t always work, from the story level. Though we see the exploits of the two human characters, we are also treated to images of the Gods, mulling over whether to intervene in the lives of the mortals and eventually getting involved in some epic fight sequences themselves. The connection between the Gods and the humans is thin – aside from one quick scene, the two groups rarely interact or have much of an impact upon one another. Add to this the plodding pace and sometimes absurd events (e.g. the location of the weapon, the already-stabbed man providing a warning before keeling over) and it becomes easy to see why some viewers would be less than enthused.

With that said, fans of Tarsem’s previous work should find much to appreciate here. As always, the man has a visual flair that is unparalleled in all of cinema. Even in a film targeted squarely at a specific demographic, the director’s style remains the center. The buildings of the cities in which the humans live are intricately carved into the faces of cliffs, rich hues in the costume denoting each character’s significance. Religious temples are literally mazes of arches and catacombs, fire glistening off of the walls. It’s no surprise to hear the man talk about his original intention of a Renaissance film: countless shots look as though they might well have been composed by Michelangelo himself. And the action sequences are stunningly choreographed as well, not one flat gimmick as in Zack Snyder’s 300, but instead planned with great forethought. The humans fight quickly, with agility and great force – swords clanging loudly, men sliding along the ground and plunging pikes into the chests of one another. The Gods move with lightning speed, flashes of their gold tunics whizzing by as they swing their weapons through the air. A fight between the Gods and the evil Titans is a thrilling sight to behold, as each group has the ability to move faster than the human eye can see; but when one of the creatures falls dead, he falls at normal speed. This gives each of these supernatural characters the ability to skewer an enemy, whirl around to slaughter two more, then return to the first all within the blink of an eye. It’s a singular concept and an amazing spectacle.

This is in addition to the unexpected flourishes that fans of great artistry can always rely on Tarsem to provide. A vast salt desert transforms into a raging sea before our eyes, the blood around a man’s severed head begins to roil until the skull itself metamorphoses into a humongous ship on a blackened ocean, an horrific scene of brutality zooms outward until we emerge from a woman’s eye, the camera zooms in on a gray cloud in the stratosphere to find that it’s composed of floating men locked in savage combat (there’s also a horse up there whose chest is split open, making this the third of Tarsem’s three films which features the death of a horse). For every barren CGI landscape, there’s a gorgeous rippled wall of mirrors, a swirling alabaster fort, a verdant Olympus where the Gods look down on the activity of the mortals.

If your tastes are more base and you’re just looking for bloodshed, your search is over. The violence exhibited in Immortals is brutal and bloody. Heads are crushed, bodies are rent limb from limb, eyes are gouged out, tongues are sliced off, faces slashed, men burnt alive, you name it. The bravery of Theseus in facing King Hyperion and his thirty-thousand man horde is clear because of how graphic the violence is. There’s no question what dangers Theseus faces, to what extent the mad king will go in retribution if our hero fails to meet the Hyperion with full force. The atmosphere matches the violence; an encounter with an enormous bull-headed man in the temple provides a good example of the chilling tension and sudden strikes of brute force that the film provides so well.

Immortals may not match Tarsem’s previous films in terms of providing a coherently structured story. There are more cracks in the narrative here than there were even in the director’s poorly-received first feature (a critical consensus which is, I might add, utterly ludicrous). But there’s so much of Tarsem’s signature panache which yet remains, an expertise in shot composition and framing, and a triumphant score to perfectly match the action on-screen. It may be true that Immortals is the least of the director’s three feature films to date, but it’s still dazzling, and intensely thrilling. It’s still a movie made by Tarsem Singh.