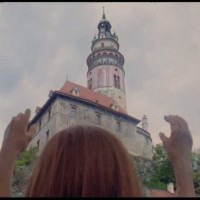 I came across director Eric Leiser’s Imagination by accident. To maintain some interest in my recently-birthed movie review site, I have employed a game of sorts, wherein every week I watch a different movie beginning with a letter of the alphabet, in sequence, until we get to the end of the alphabet and then it  starts over, or I quit, or I climb aboard my starship and head for the skies, whatever the case may be. This week’s offering had to begin with the letter I, and since there had been little response from my readers, I had set out to find a movie on my own; my pick was to be Idle Hands, you know, the 1999 comedy directed by Rodman Flender. Unfortunately, both video stores that I visited had no copies of that gem on hand, yet both carried the tantalizingly-titled Imagination, and a glowing pull-quote from The Onion’s A.V. Club was all it took to sell me on the rental.

And I’m glad that I took the chance.

It’s true that the production values of the film are lacking. In particular, the scenes that feature therapist Dr. Reineger or the Mother character are striking for how badly acted they are. There’s a moment where the Mother runs out on a hill to give Reineger a sob story about her daughters’ increasingly bizarre behavior and prophetic visions, and the way that the two yell over one another is laughable. That, coupled with the twee way that Leiser produced the film – utilizing everything from clay figures to stop motion to shadow puppets – made the overall film feel largely like a B-movie version of a Michel Gondry film. Or, as I told my wife, “It’s like if Animal Collective made a horror movie.”

But at the same time, I can look past the poor acting and all-too scripted dialogue because there are some genuinely intriguing ideas beneath… not to mention a wildly inventive method for over-coming the film’s budgetary shortcomings. The movie is about two sisters, Sarah and Anna, one of whom is blind and the other with Asperger’s syndrome. Their disabilities would be enough to cause any parent to worry, but the girls seem to also share one brain despite being two separate entities. They move in unison, they think in stereo, they live practically chained at the wrist because they feel such a strong connection to one another. Oh, and they also inhabit a strange world inside their own minds where an albino stag and a huge, glowing tree are normal occurrences that may or may not signal the end of the world as we know it.

The movie deals with the girls’ twin brain in a fascinating manner, overlapping their dialogue and showing them mimicking one another’s movements. Sometimes it is difficult not to question if there really are two children, or if the second is just a figment of the other’s, ahem, imagination. Regardless, it’s suitably creepy when the two girls play a game of pat-a-cake in a doorway to make it appear as if there is just the one girl and her reflection; when one moves in a different way than the other, it’s a shock despite knowing that these are supposed to be separate characters. And the movie commits to the concept, too, as Reineger details previous cases of similar shared brain function. We see home videos of two boys who fight playfully, matching each other’s moves precisely like two halves of one whole.

Beyond that, though, although Leiser’s patchwork of animation and live-action can sometimes be grating or too winkingly clever (other critics simply label it “avant garde”), often it blends together seamlessly. Take, for example, a scene where the girls stray out into a field. They stand silently, then move through the grass using live-action and stop-motion. Prolonged exposure overtakes the scene as the clouds scurry across the sky, then without warning the girl (now one being) turns into a doll entering an illuminated cavern, all pipe cleaners and rubber and bits and pieces of any old thing. This way of blending the real world and the fantastic together works for multiple reasons. Primarily, it serves to exhibit the overactive imaginations of Sarah and Anna, but it’s also a way for a made-on-the-cheap production to retain a sense of grandeur on an epic scale. As an another example, it’s amazing how the simple “infinity mirror” trick (placing two mirrors back-to-back in order to create the illusion of an infinite number of reflections) can be used to turn a shot that merely contains one actress, into a profound sequence involving dozens of girls speaking the same thoughts at once.

Or let’s look at one of my favorite scenes – also one of the easiest to create, I’m sure. In order to replicate an earthquake in downtown Whereversburg, U.S.A., Leiser did something ingenious: he shook the camera. Buses and cars drive on the street normally, but the camera shakes violently and the sound of creaking metal takes center stage in the score (which, the by the way, is another haunting yet sometimes all-too present facet of the film). As the planetary disruption gains power, the camera jumps speedily around all four corners of a skyscraper, the image vibrating the entire time. It’s such a simple effect, and it would be easy to mock the way that the vehicles on the road don’t seem to notice the alleged disaster taking place around them, but I believe that the movie sells what it’s doing so well that a stray goof like that is hard to take too seriously. Especially when the scene ends in a beautiful, symbolic shot of a mirror shattering in a shallow pool of water, red lighting reflecting off of the splattered drops of liquid and jagged glass in order to represent a deadly car crash.

Okay, so the human story is nothing to write home about. In the end, the question of whether the girls are aliens or ghosts or insane or speaking to God is not all that exciting. What is exciting is the way that the movie gets to the end, whatever it may be. It gets there by dipping through a multitude of different styles of filmmaking, sometimes even using the actors as the screen (as when a movie is played on a projector and we can see the reel’s images playing out on the faces of the characters). Imagination is endlessly inventive and subtly eerie. It’s engaging visually, but utterly fails to register any emotional resonance. When one (or is it two?) character die late in the film, the event feels unimportant. It’s hard to care about the fate of the world, ultimately, when the world of the movie is basically a blank canvas for Leiser to paint upon.