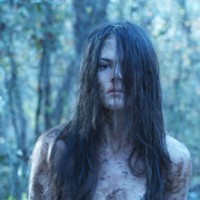 When I saw the original I Spit On Your Grave a couple of years back, it was semi-traumatizing. I hate to use that word, because it seems so disrespectful. The movie is about a protracted rape that plays out over and over again in the woods, with a sparse score so that the goings on feel all that much more real. It made me much more aware of the objectification of women for a time, and all I could think about was how awful the division of the sexes is and always has been. The only other time I have felt something similar was in high school, when I took a class about the Holocaust. The teacher once pulled me aside to ask if I wanted to drop the class because he could see how much it had been affecting me – I saw the school as a concentration camp, a cardboard baler at work as a convenient means of murder for purposes of genocide. Viewing I Spit On Your Grave didn’t drive me quite as far toward madness as that Holocaust class did, but again, it was the closest I’ve felt since that experience.

I wouldn’t say that the original film was good, but I was drawn to the 2010 remake because of the way that the original had touched me. Let me say upfront that this version is nowhere near as wrenching as its predecessor. The largest complaint I had with the original film was that it gave us this harrowing picture of torture, then tried to dismiss it in the end by turning into a standard exploitation revenge flick. I felt that the final act betrayed what had come before. The 2010 version doesn’t suffer from this same problem because it puts much more emphasis on the revenge aspect, so much that the movie can almost be divided evenly into two parts: the part where a woman is terrorized by five men, and the part where she seeks vengeance on them.

We all know what we’re waiting for going into the movie, and the rape sequence is indeed disturbing. We don’t get the primal screams of Camille Keaton as she suffers agony out in the woods, so it’s not quite as affecting. But the rape scenes in this updated movie are more psychological than physical – which is not to say that the character doesn’t suffer physically, or that she is not left stumbling through the woods naked in an effort to escape her attackers just like in the original film. But as far as the way it is filmed here: fuzzy shots often from her point of view, close-ups, a lot of insinuation and threats made before anything actually takes place. In the 1978 film, every time the woman was attacked anew, it was shot from a wide angle. In Roger Ebert’s ridiculous zero-star review of the new film, he refers to this as “rape foreplay”. That’s a fairly accurate description. She is being tortured, yes, but we don’t have to get too involved. In addition, the movie has a professional look to it, so we are not required to think of it as anything more than a movie. A movie with some horrid over-acting by Jeff Branson (as the leader of the group, Johnny), by the way.

That lack of involvement is not a criticism, mind you. The original film tacked on a revenge that felt nowhere near equal to the anguish that Keaton’s character had suffered. She was pursued and repeatedly ambushed, and then they expected the viewer to accept that a quick death for her attackers was justice enough? Keeping us at a distance here, the 2010 version of I Spit On Your Grave allows the viewer to understand our heroine’s predicament and still root for her in her quest for vengeance. Further, the way that she gets back at those who abused her is much more individual to their role in the attacks previously, more sadistic and prolonged. It’s hard not to think of the Saw franchise as a basis for her payback – each method she devised for torturing and eventually murdering those responsible was designed to specifically address their crimes against her. I was also impressed by the way that the movie switched gears midway through. At first, we followed the girl Jennifer as she traveled out into the woods and we waited in tense silence as she sat alone in the dark – because we knew what was to come, it helped build some tension. After that, though, the movie begins to follow the men who assaulted her. The “bad guys” become the protagonists, watching out their windows and waiting for the ghost of a woman they thought they had broken to come calling for them once again. I suppose the idea of “the hunter becomes the hunted” is a fairly standard trope in film, but I thought the idea of waiting with the evil-doers while the somewhat morally justified victim becomes the monster in the shadows was an intriguing twist.

But yes, the movie then does become mostly exploitation. The rape sequence is equally titillating as it is distressing, and the focus on gruesome and absurd sources of revenge make the film appear even less serious about its victim’s situation than it already was. It’s difficult not to laugh at director Steven R. Monroe, who claims that the MPAA said of the film, “Look, you’ve got an NC-17 movie, but we don’t recommend that you cut it down because we feel like it’s really impactful.” The movie is not impactful in any sense of the word, but for what it aims to be – primarily a source of entertainment – I think that it mostly succeeds. I’m not saying that 2010’s I Spit On Your Grave is a great work of art, but it sets up a reason for Jennifer to act the way she does and then has a lot of fun following through on her takedown of the five men she had the misfortune of running into.

This version of the movie does not have the emotional resonance that I found in the original, but I mean that as neither an insult or compliment. Despite having the same title, I believe that they are two different films because they seem to have fundamentally different goals. One primarily shows the reality of an awful event, the other takes an awful event and turns it into, well, a movie. Each works to a certain extent, but neither really manages to extend far beyond the mere concept of violent crime. There is no commentary here, no larger thematic goals being sought. Both films may work, but not necessarily toward anything specific.