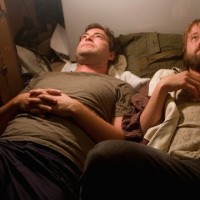 But that’s just the premise. What actually happens is much different. What actually happens is they talk about the project. They talk about whether it is worth going through with, whether they are scared about the idea of engaging in homosexual acts despite their heterosexuality. They both consider themselves open-minded, but there’s something about the thought of.. it’s just kind of.. you know, I don’t know, is it something that they can will themselves through? Why do they feel so strongly about the need to complete this project? Does it have something to do with where each of them are in life, how their actual place in life meets or does not meet their expectations from when they were younger? This is a talky, thinky movie. These two guys lie around on the floor or sit on a bed or play basketball out in the street and they talk about these things. These two friends who haven’t seen each other in a long time, they have this radical project and it gets them talking – just talking.

That’s one thing. Then there is the fact that Ben is happily married to Anna. Andrew and Anna never really knew each other, and Andrew is a very loud person. He’s an artist, and though he knows he is intruding on their lives, he nevertheless imposes himself on Ben and Anna. Well, Ben keeps saying it’s not that big of a deal. But Anna is frustrated. She tries to understand why Ben stays out all night with Andrew, rather than coming home to be with her. She doesn’t want to be mean, you know. She understands that they haven’t seen each other in a long time. But it’s hard. It’s hard on all three people. Anna and Ben get into arguments about Andrew’s being with them, which neither one wants to do. It just happens. The balance has been upset and these fights occur because it’s hard to make sure that everybody is happy.

But this not-quite-gay porn film that the guys want to make, that causes some problems. That adds to the drama, it creates the need for more conversations with Ben and Anna. I don’t think that these moments are handled well – it’s a tricky thing, getting from the place where the wife is outraged and shocked about the plans and taking it to a place where she is accepting. The movie doesn’t traverse this path well. It brings in other things and plays them off as comedic, but it really dug a lot deeper than the movie let on. Is what Ben intends to do with Andrew merely art, or is he cheating on his wife? That question isn’t clearly addressed – and I worry about what will happen after the movie is over.

But the strength of the film comes in all of these awkward, talky, real-life moments. When Ben goes to a party with some of Andrew’s new-found friends, he’s uncomfortable at first. He thinks they’re all odd and he doesn’t feel like he can be part of their scene, but he loosens up. The movie shows that transition and it’s great. The movie shows Ben and Anna being lovey and together and just good friends and that’s great (although many of the scenes with Anna are tainted by Ben’s ulterior motives). And best of all is the final leg of the movie when it comes down to the wire and the cameras are rolling. I’ve heard through the grapevine that most of the dialogue in this final scene was improvised, which I can totally believe. It feels natural. Maybe it goes on a little too long, but otherwise it’s pretty funny and endearing.