How to Live Forever 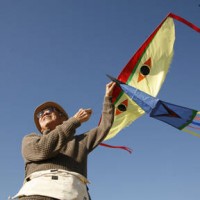 How to Live Forever

I haven’t been to a documentary screening about the horrors of the food industry that didn’t make me want to go out for a McDonald’s hamburger afterward. I love documentaries, but those sort of films which try to push their position on you always leave me cold. I’m surprised I didn’t go out immediately to vote Republican after Fahrenheit 9/11. My favorite type of documentaries are the artistic; the kind which glean mountains of philosophical musings from a single sentence, from the composition of the frame. I don’t like being told what to think, but I do like being led toward thought. Mark Wexler’s How to Live Forever doesn’t have a position and though there are plenty of opportunities for philosophical debate, the film squanders them all. Content to revel in sheer quirkiness, the film accomplishes little to nothing at all. The title is epic, but the movie is anemic.

There’s some hint of cutting insight at the start of the film, as Wexler travels to a Las Vegas convention for funeral directors, complete with sports-themed urns and scantily-clad models showing off the coffins. This alone isn’t particularly innovative, if the idea is to point to the hypocrisy inherent in scheming to make dollars off of grief, but one interview subject frames it in a different light: these gimmicky items aren’t meant for the deceased at all, but instead for those still living. That is, funerary rituals themselves are rituals for the living as a means of coping with the knowledge that we do not live forever. It’s an intriguing line of thought, to be sure. Where millions before have sought the meaning of life, here’s a chance to explore the meaning of death.

Alas, the film doesn’t follow that road – instead turning to legendary exercise guru Jack LaLanne to provide goofy ideas about how he’s kept so fit for so long. This is just the beginning, as the camera travels across the world to talk with the very old (multiple interview subjects exceed 100 years of age), as well as those involved in the business of combating the natural process of aging. You know: a cryogenics laboratory, a proponent of the low-calorie diet, leaders of a small but serious brand of mysticism deemed “laughter yoga”, Suzanne Somers, etc. But while it speaks with all of these people, the film reaches no conclusions. It doesn’t even seem to try to draw any connections between the different subjects’ disparate thoughts, unless the theme is that we should all throw our hands up and give up because there’s no way to know how to live forever.

Wexler, providing a foundation for the rest of the film, talks about his mother’s recent passing. She had been a creative woman, then lost her artist’s workshop in a fire and subsequently lost the energy that she had previously enjoyed. It didn’t take long afterward to succumb to mortality. It’s indicated that the director felt that he was facing his own mortality at that time, a thought which sent him on the journey chronicled in the film. It’s hard to believe, as we watch an old woman being serenaded a “Happy Birthday” tune while a balloon hits her in the face repeatedly, that the movie is trying to elicit anything other than a cheap laugh. He shows LaLanne burst into song and leaves the camera on him while dogs howl in the background… because it’s funny. Somers tells the documentarian that due to hormone treatments, quote, “It’s perfect inside me.” Cut to Wexler giving a perplexed expression. The deepest that the film’s line of thought goes is in asking people whether they would like to live to be 500 years old. Even then, the greatest concept that the movie draws out of this is that some people say ‘yes’, and others say ‘no’. Shocking!

Granted, there are a few moments where some measure of profundity creeps through – or perhaps not profundity, really, but realism? The hard-drinking, chain-smoking 102-year old Buster Martin lashes out at Wexler in a bar after being asked to repeat an answer as though the question hadn’t been asked. “I’m not an actor!” Martin yells, the camera steady on him throughout the tirade. There’s no connection here to the movie’s themes, really, nothing that this says about life or death or how Martin got to be where he is today – in short, there’s no reason that the filmmaker has for leaving it in the finished work except for the fact that it seems important. In documentarian Errol Morris’ stunning debut Gates of Heaven, an elderly woman goes into a rant about the fact that her grandson doesn’t visit when she is supposed to be speaking about the closing of a nearby pet cemetery. It made sense for Morris to include this moment of unthinking honesty because it provided the structure to build the movie on top of; it clearly exhibited that the film was much more about relationships than about an eccentric story.

How to Live Forever is incapable of this kind of seriousness. It’s a cutesy, clumsy mess. The director speaks with so many people who have lived for such a long time, he interacts with dozens of individuals whose lives are inextricably connected to their deaths, yet the man fails to wring anything out of the exercise. It’s so depressing to think that Wexler was able to sit down with 114-year old Edna Parker (at the time, the oldest living human being) and came away with practically nothing. The final moments of the film provide a perfect summary of the movie as a whole (spoiler alert, kind of) – showing the director wading through a storage unit crammed with odds and ends and paintings made by his mother, the man looking at a few without comment, then turning off the light and closing it all up again.

This movie looks at paintings, has nothing to say, and walks away.