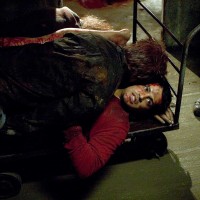 Say what you will about director Eli Roth, the man behind the torture film Hostel, but he’s got an eye for atmosphere. I wasn’t a fan of his debut, an homage to Evil Dead and the bloody, cheesy fright flicks of the glorious ’80s, but I can understand how others might be. The film captured the essence of that time in cinema history – so well, in fact, that Roth caught the attention of similarly homage-heavy filmmaker Quentin Tarantino, whose name is stamped all over this follow-up. Not convinced? Watch the spoof trailer which Roth made for Tarantino and Robert Rodriguez’s if-you-didn’t-see-it-in-the-theater-then-you-never-really-saw-it spectacle Grindhouse. It’s bizarre and horrifying, but more than that it’s a believable product of the “grindhouse” era, where horror pictures based on holidays were churned out at a mind-boggling pace.

This holds true, too, for Hostel. Whatever issues one might have with its absurd premise, its juvenile prurience, its heavy-handed metaphors (like, OMG, parallelism yo!), at least Roth manages to place all of this inside a setting which brings added weight to the situation. The main characters, three sex-obsessed tourists backpacking through Europe, get bored of Amsterdam with its lax drug laws. The brothels, which find silhouettes making whoopee in all manner of positions behind close doors, have become passé. And who wants to have to pay for the company of an attractive lady, anyway? Hence, on the word of a total stranger, the three bros travel to an out of the way Slovakian town where the women are wild about foreign guys. The city in question is gorgeous. It retains an ancient charm while being welcoming to the weary traveler. It’s too bad that the men spend the majority of their time in a bar or in their hostel’s spa due the allure of half-naked girls. Unnecessary nudity is all well and good, but come on man, gimme more of them establishing shots! The city is expansive, yet remains somehow able to induce claustrophobia; the weather, perpetually cloudy.

Now, as you might imagine, this is where things begin to go awry for our frat pack – they begin to be killed off rather unceremoniously, by a masked man in a darkened, concrete room. I mean “unceremoniously” as far as the film itself is concerned – the characters are given only enough depth that we’re able to tell them apart by their personalities in addition to their visage, yet not so much that we feel any fondness for them as human beings. Although, then again, we are given a glimpse into their very souls as they make the profoundly difficult ethical choice not to make love to a woman who is in a “coma” (anybody else see a reference to Kill Bill there?). Nah, despite this humanitarianism, these dudes are hardly worth our time and so their inevitable execution doesn’t mean much. However, the gory methods utilized in leading them toward their demise is sometimes chilling and always intriguing. Of course, in a world that has seven installments of the Saw franchise and five entries in the Final Destination series, perhaps the gorier aspects of the film are less exciting than I’ve implied. Let me put this in a different light: the gore itself may not be groundbreaking (one instance of ocular decimation is especially false), but the set-up of the scenes is often inspired. When one of the guys tries to stand after having his ankles severed, for example, the results are delightfully disturbing.

And once again, the dimly lit corridors of the abandoned warehouse where these men have been put into captivity for the last hours of their lives, it’s beautiful. When one of the boys escapes from his captor’s clutches (in perhaps the most tense and brutal moments of the entire film), he slinks into the hallways wearing a horned mask as disguise. The image is akin to a demon slowly making its way through the pale and filthy building. From here, things begins to dip into the cartoonish as the true nature of this house of horrors becomes apparent. Without giving too much away, suffice it to say that this is not the work of a deranged madman, but instead the methodical manipulation of a calm and collected madman. In any case, our suddenly sole protagonist has to wind his way through a fearsome maze of the macabre. Though the situation grows silly, the handling of the events is splendid. One of the most gut-wrenching moments of the film comes not when our new hero is scurrying through the darkened confines of the lower levels, but later when he is hiding in plain sight and in broad daylight. A secondary character played by Rick Hoffman (“Commander in Chief”) exudes menacing cruelty without the need for images of blood and guts.

And I think I’m going in circles saying the same thing here. Eli Roth is no writer – he compensates for this by throwing in unclothed women. Well, that and second-rate plotting technique. Like a story of past trauma which must inevitably be re-lived, but not for any purpose that might add depth to the character or show his emotional growth – no, just because it’s an easy callback to allow audience members the opportunity to say, “Oh, this is kind of like that story he was telling earlier in the movie!” But the director still somehow has honed his ability to make these otherwise stale scenes into something powerful by really drawing the heart out of them. A late-in-the-game shift from exploitation to empowerment is initially tired and/or played out, but the scene maintains a surprisingly punch that allows it to transcend its otherwise hammy roots.

I guess you could say that Hostel is sort of a guilty pleasure for me. But I don’t really feel guilty for the aspects of the film which I derived pleasure from. I just feel somewhat disappointed that those impressive set-ups were so frequently upended by lazy punchlines.