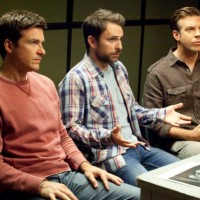 There are some very funny moments in Horrible Bosses, I’ll admit, but those moments are scarce. The rest of the film is a joyless slog through pitifully one-note ideas, a curious monotony for a comedy, broken up slightly by the inclusion of Kevin Spacey as perhaps the most despicable of the three titular bosses. The other two bosses – Colin Farrell and Jennifer Aniston – are goofy in their own right, or criminally insane rather, but lack the intrigue of Spacey’s character. At the risk of abandoning the tried and true template of my movie reviews and getting straight into the meat of the movie in the first paragraph, rather than providing a context-building opening before diving into 1) the things I liked, and then 2) the things I didn’t like, before wrapping it all together in a closing paragraph that summarizes my thoughts and perhaps offers a pun, Dave Harken (Spacey) is a more interesting character than anybody else in the movie because he isn’t relegated to a single joke; instead, he’s allowed to be a more treacherous villain because there’s no telling where he’ll turn. Dr. Julia Harris (Aniston), on the other hand, is a sexual predator and a rapist (rape is always, always funny!), and her story throughout the movie involves little more than variations on that theme. Dana Stevens’ excellent review of the film at Slate.com has a similar complaint, noting that Aniston’s character “resembles no person, real or fictional.” Perhaps using the term ‘a single joke’ is a bit misleading, because there are two or three jokes that surround the appearance of Jamie Foxx as a shady guy named Motherfucker Jones – his name being the most obvious – and yet he still feels like merely a character instead of an actual person. Ah, there we have it: Horrible Bosses grates because its characters are not fleshed out into actual human beings.

But what about our protagonists? Jason Bateman (“Arrested Development”), Jason Sudeikis (“Saturday Night Live”), and Charlie Day (“It’s Always Sunny in Philadelphia”) have a cute chemistry together which salvages several scenes. The initial meeting with Jones is a good example of this, as well as a stand-out scene involving narcotics that I will not reveal in any more detail, except to say that Bateman and Day work well as a comedic team in that moment, utilizing their typical mannerisms and exaggerating them to great effect. They’re less likable individually, though, as those same mannerisms which seem funny when used as a foil to the personalities of the other two feel oddly annoying on their own. Day is particularly hit or miss: most of his interactions with Aniston are unbearable, and returning to a stupid reference to his character being a pedophile (for urinating in an empty playground at night) only get less funny with the incessant repetition.

The story proper involves the protagonists’ crazy plan to kill one anothers’ awful bosses, Strangers on a Train style. Thank god I watched that movie recently so that I would understand the reference. The bulk of the action involves the three doing reconnaissance work at the houses of their bosses, wacky hijinks ensuing left and right. I can see where the jokes are, or where they are supposed to be, but they don’t do anything for me. Bateman, while trying to find a way into his boss’ abode, notices a rock which clearly houses a spare key. He hands it to Sudeikis, who immediately turns to hurl the rock through a window instead of opening the secret latch on the item. I get it: He not doing it right. But is that funny? I guess it is for some people, but it left me cold. Or how about a scene where the three men continuously mispronounce the name of an OnStar representative from India? Funny names, always a winner, and that extra dash of xenophobia is certainly beautiful, but on the other hand, didn’t we as Americans transcend call center in India jokes after “Outsourced” went off the air?

The tension mounts in the third act, as it must, being the third act and all, and with it Spacey’s character becomes the most important of the three bosses – Aniston and Farrell fairly drop from the picture altogether, save for the requisite nods to their stories being resolved suddenly in order to get to the credits. Much as in the Steve Carrell/Tina Fey vehicle Date Night, the action sequences are surprisingly engrossing for what is otherwise a lightweight comedy. It’s nice to see the drama ramping itself up, even if it is ever so slightly: the resolution to the primary plot-line is no less hurried than the B- or C- stories, but it gets more focus and so is therefore easier to imagine as being carefully crafted.

So, to ultimately settle into that groove that I’m familiar with, I do have some limited praise for Horrible Bosses in spite of everything. There are a handful of moments that genuinely made me laugh, though that may be an entirely subjective consideration, and I appreciate Spacey’s character much more than any of the others. But the others are so dismal in various ways that it’s hard to see the the cashmere past the red dot, if you Sein what I feld. I spent at least the first thirty minutes, largely set-up for the rest of the plot, wondering why I had even bothered going to the movie theater. My outlook improved further into the film’s runtime, but I nevertheless couldn’t stop thinking that I would much rather be watching a much better movie. My advice: if you’re at all interested in this movie, wait until it’s out on Redbox*, and even then only when you have a free rental code. Or, whatever, I guess it’s probably worth your dollar, too. Don’t go much higher, though.

*Future readers: Please forgive my reference to a clearly outmoded movie viewing scheme. The term “Redbox” probably means nothing to you. I apologize for being so 2011-centric.

One Response to “Horrible Bosses”