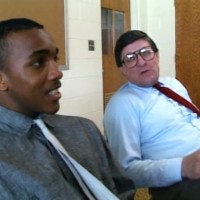 When I finished Hoop Dreams, one of the most famed documentary in the history of the medium, I was convinced it was a joke. As the movie hurtled along to its conclusion, everything seemed to be coming together in an inexplicably perfect and ironic way. The characters seemed to be saying things that were too concise for the camera, that got to the heart of the underlying story too easily. The dry narration become comedic, the jazz soundtrack hilarious. “I wish I hadn’t gone in thinking this was a documentary,” I told my wife, because I was sure that the filmmakers had pulled a fast one – the Catfish of the ’90s, you might say. Come on, there’s no way that Steve James or Frederick Marx are anything but pseudonyms.

That said, it’s interesting that when I was searching for images of this movie to include with my review, I came across a photo of Billy Mitchell, the villain from King of Kong. That movie is another excellent documentary, but one that it is easy to draw a parallel to because the story comes together in a way that is too-perfect, so much so that it almost feels scripted. And it’s true, with Kong, that some moments were shown out of context in order to build more drama, but for the most part everything that happens is true. I’ve spent the day researching the people whose lives are chronicled in Hoop Dreams, and there is nothing to suggest that the events that happen in the film are anything other than factual. It would be a fantastic film either way – as a work of fiction, it’s bizarre and extraordinarily acted; as a documentary, it’s engrossing and thought-provoking.

The movie follows two children as they go through high school, both basketball players with dreams of making it in the big time. They are both recruited for a prestigious private school on the other side of town, and thanks to scholarships they are able to attend despite their social status (both boys are living in “the ghetto”). From there, there’s a world of ideas to explore. The film deals in matters of race, class, destiny, truth, capitalism, patriotism, family, and the list goes on. And that’s just the things that are brought to the forefront of the conversation. I found myself, while watching the movie, comparing it to the magnificent 7 Up series, wherein a group of children are interviewed once every seven years in order to track their growth as human beings. With that series, it’s hard not to give into the temptation to generalize, to decide that, oh, well, of course this person was going to turn out this way – just look at his or her past decisions. In a similar vein, we watch these two high school kids, William Gates and Arthur Agee, and it’s difficult not to imagine where the kids are headed and how their environments, the choices made by them and for them, will affect the outcome of their story. But, as is so often the case, it’s difficult to pinpoint what drives a man to be the way that he is. “Give me a child at age seven,” goes the maxim, “and I will give you the man.” It’s just as easy, though, to imagine, say, a rich child relying on his given station in life to get by as it would be to imagine him rebelling and denying his nurtured upbringing. All this is to say that, despite what we imagine we must know, nothing is set in stone.

This provides a large part of the framework that Hoop Dreams is built upon, and the concept plays a huge role in the overall dramatic story at the heart of the film. But it also plays out over and over again in smaller vignettes throughout the film, the idea that you cannot expect what will happen. Often, the filmmakers will release important information on the unsuspecting viewer without any warning. Arthur’s father, we are informed, left the family after years of drug abuse in addition to the physical abuse he had wrought on his wife. What? Where were we for that? It might seem sloppy, I suppose, to leave out large portions of the story in that manner, but I think that containing the narrative primarily to the children and their basketball dreams, only occasionally dipping into the larger goings on, anchors the film.

I’ve avoided the movie for literally years now. I know this because I commented on a fellow critic’s review in 2008 letting them know that I had checked the DVD out from the library and intended to watch it soon. It took me three years, and the reason is the daunting three hour runtime. I’m not convinced that the length of the film was a necessity; the film flips back and forth between the ups and downs of the two kids’ “careers” repeatedly, and for the longest time it just feels like it’s going on forever without coming to any real conclusion. Of course, the slow build-up is what gives the movie that epic sensibility, too, so it’s hard to write the runtime off as a complete misstep. Let me say it again: the movie is epic. Because it takes the time to build the characters, to allow the viewer to get to know them well and follow them for years, the turning point becomes all that more incredible. All that, while providing biting social commentary – amazing.

One thing I wish that the film had touched on, though, was the presence of the cameras in the Agee and Gates homes. It’s clear that the Agee family ate up the attention, but I have to wonder how the presence of a seeming 24-hour surveillance affected the lives of these two children. Keep in mind that the cameras followed them over the course of their entire high school career. What many people consider to be the best times of their lives, for these boys, was interrupted by video machinery and a cadre of filmmakers. It took several installments of the 7 Up series before any of the subjects spoke frankly about the effect that the annual interviews had had on their lives. I can only imagine what William and Arthur would have to say. And it’s clear that it does affect them: look at the way that Arthur mugs for the camera in his Spanish class, the way that the teacher glances back disapprovingly.

The reason that I found Hoop Dreams to be so unreal is because it is. As the Hollywood Reporter notes, “it could be transposed without alteration into a fictional film.” The filmmakers had the great luck to capture a monumental story in progress, and the great skill to weave the many varied threads into a working whole. In a way, I suppose my hesitance to accept the film as fact is a great compliment. It’s too perfect, too well-constructed to believe. Well, it is. From what I’ve read, the subjects of the movie were upset because the footage was supposed to have been used for a PBS broadcast on television, not used for a commercial release. As the story goes, director Steve James and his crew were also unprepared for the response that the film would garner. The film has aged considerably since it’s release in 1994, but it remains timeless nonetheless. Because the movie is more about dreams than about hoops, because of the myriad themes it touches on, Hoop Dreams stands remarkable and captivating.