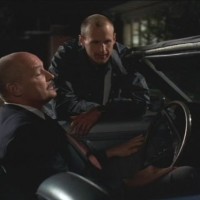 I sort of avoided the Christian football film Hometown Legend for a while, despite my intense love of bad Christian movies, just because I was never in the mood for what I considered a “Facing the Giants knock-off”. If I had paid any attention at all, I probably would have realized that this is no knock-off – it came out four years prior to the Kendrick brothers’ film. And what I learned while watching the movie is that it it’s only tangentially Christian-themed.

The movie takes place in a small Southern town that was once known for its high school football team, which led the state for sixteen years straight. After an unfortunate accident which left one player dead, legendary Coach Schuler (O’Quinn) retires and the town falls into disarray. Part of the problem is that a scholarship has been created to honor the fallen player, the pursuit of which has driven each subsequent year’s team further apart from one another. Each student is working toward his own goals. Now the town is broke, I guess because they’ve got nothing but high school football supporting their economy, and the school is set to be shut down. But good ol’ Coach Schuler is going to come back for the final season, just to re-ignite that old magic.

It’s a pretty straight-forward story from there. The players don’t work well together, and a hard-nosed coach has to show them the right path. In one sense, I suppose it really is that simple of a story. But a closer look reveals the shades of gray in between. Schuler’s strategy with the students is to push them toward greatness. If they refuse to work his way, he just pushes them more. He claims that his goal is to create a cohesive football team, calling the scholarship a curse on the school. He berates his students for their individualism, which is understandable to a certain extent. But then consider the fact that Schuler has returned with the express purpose of rekindling some glory – is that not a selfish act in itself? And Schuler’s antagonism toward the scholarship neglects the fact that some kids really do rely on these sorts of scholarships to help them get into college. Is that inherently wrong?

I never really knew how to read Schuler. The movie seems to want to paint him as the moral leader, but there so often seems to be more madness than method. When a fight erupts between two teammates, Schuler asks who initiated the skirmish. A boy tells the coach the answer, and he is immediately cut from the team. Schuler asks again. After a moment, a second boy answers… knowing full well what the penalty will be. These characters are referred to on the IMDB page as “Stupid Snitch #1” and “Snitch #2”. That’s amazing. The moral courage that is necessary to speak up while knowing full well what might happen if you do is so much more compelling than some half-assed lesson about not being a ‘stupid snitch’. That’s why it’s so hard to understand who Schuler is supposed to be in this movie. He’s positioned as some kind of great leader, but the choices he makes are positioned to lead toward some kind of pseudo-fascism.

I think he grows by the end of the movie. Schuler’s assistant coach has a talk with him and there’s sort of an ah-ha moment. If there’s a real problem with the movie (other than the fact that its central story isn’t enough to sustain the movie’s runtime), it’s that any character growth is difficult to see. To go back to the FTG comparison, the moment when coach Grant Taylor stopped being such a prick and gave his mind and heart to God was easy to see because he changed his life. His team started winning. The wind changed direction so that his kicked could make a 60-yard field goal. There’s nothing so clear in Hometown Legend. Does Schuler have a radical change of heart? Do his methods affect his students? Aside from one stirring(?) monologue, it’s hard to see any signs of growth there.

But that’s sort of what makes the movie more enjoyable, too. Instead of being some easy tale of going from bad to good drawn with big, bold lines, this movie is a little bit more challenging. Sure, it’s book-ended with Lacey Chabert’s call for God to “show up and show off”, but the film surprised me by not being an easy religious knock-over. Schuler is a complicated character. The out-of-towner kid Elvis (seriously???? what kind of a name is Elvis???????????) who has to overcome the prejudices of the townies, he’s a complicated character. They’re stubborn, they’re misguided, they’re… human.

I don’t know whether that was intentional. It’s hard to understand what the movie was really going for. But although Hometown Legend is definitely slight and spends a lot of time running in place, I still can’t help but thinking of it as mostly successful. It’s defied my expectations. I spent more time analyzing the characters’ motivations than most viewers are likely to do, but the movie is still likely to raise anybody’s eyebrows because it does not hit all of the beats that the cliched plot-line suggests. Nothing extraordinary here, but intriguing nonetheless.