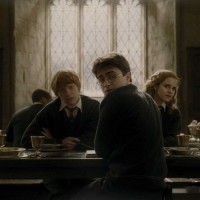 Harry Potter and the Half-Blood Prince

When the first Harry Potter movie was released, it was a long time before I finally got around to watching it. I was consciously avoiding it, afraid of the changes that the filmmakers would make, afraid of the interpretations that would be different, afraid of spoiling the images of the characters that I had in my mind. In short, I was afraid that the movies would not be what I thought that they should be.

Harry Potter and the Half-Blood Prince, the sixth movie in the series, brings to mind those early days because it most certainly is not what it ought to be.

I have long held that by the time the Potter series reaches its conclusion, the movies should be in R-rated territory. The story gets darker with each book, the violence gets increasingly bloody and the death toll only rises. The return of Voldemort affects the entire wizarding world in profound ways – the sense of fear and dread is permanently lingering in the air, and this after the vast majority of people thought Harry and Dumbledore to be liars or lunatics when they declared that Voldemort had returned. Harry’s having learned that he is destined to enter into mortal combat with the most feared wizard in history brings a lot of complexity to his character, especially as he is still a teenager experiencing the normal pangs of lust and confusion that befall us all.

Or, at least, that’s what the movie should have shown. Nobody can deny that the movie is often visually striking, but it fails entirely to capture any true emotion… while dealing with a story that is brimming with mixed feelings screaming to be let out. I was impressed, in Order of the Phoenix, with the performances of both Daniel Radcliffe as Harry Potter and Michael Gambon as Dumbledore. Radcliffe seemed to have grown considerably as an actor since the previous film; there were times when he was shown on-screen in quiet frustration, and those were the moments when he said the most. Gambon has consistenly mis-read the character of Dumbledore, playing him as some sort of joke-cracking hippie uncle, rather than the respectable and almost ethereal enigma that the character truly is. In OOTP, Gambon for once did a reasonable job playing the character the way that he was meant to be portrayed. But in HBP, Gambon is once-again a joke-cracking uncle (except for one amazing sequence nearer the end), and Radcliffe reverts to his less than noteworthy self.

After leaving a magic-ridden shop, Potter and his pals walk down a broken down and deserted Diagon Alley. This, along with an invented attack scene at the Weasley’s house, are the scenes that are expected to stand in for the fear that has gripped the wizarding world. There is a bridge attack at the open of the movie which is the only moment that actually shows anything bad happening in the world at large, but it plays out like a big setpiece. There’s a bunch of CGI people who get off the bridge just before it collapses and we never have to know anybody who was there or how it affected them.
That’s just it! Nobody is affected in this movie, and in turn it does not manage to affect the audience. Instead of a gripping sense of dread, we get dozens of jokes about Ron’s snogging habits and other thinly-veiled sexual double entendres. What, this is supposed to show that they’re “growing up”? The characters were more adult when there was some sort of complexity to the actors’ performances.

So there are three basic plotlines here: 1) Harry trying to find out who the Half-Blood Prince is, 2) Harry/Ginny and Ron/Hermione and their sexual tension, 3) Dumbledore’s request that Harry try to win a memory from the new teacher, Professor Slughorn.
The HBP plotline, which provides the movie its title, is given a very short shrift. We do find out who the Half-Blood Prince is by the end of the movie, but it’s almost an afterthought. There is no significance to it at all.
Everything between the boys and girls and who likes who and blahblahblah is superfluous. It didn’t have to be, but it is. It’s superfluous because there’s no reason that Hermione should have any interest in Ron, no reason for Harry to have any feelings for Ginny or vice-versa, and most importantly – no reason for the audience to care whether these relationships work out. These relationships exist for the sake of jokes about snogging, not because there is any real chemistry between the characters. Then again, that’s kind of the way that Rowling wrote it. She kind of treats her characters more like pawns than living beings, and so she’s free to mix and match them in whatever way that she pleases, regardless of whether it makes any sense.
The third plotline, involving Dumbledore’s request from Harry, is the one that actually sort of works… but it gets bogged down in too many silly moments (the dinner scene, the felix felicis scene) which detract from the drama beneath. Like many of the actors in the film who appear in cameo, Jim Broadbent is a great performer who really owns the scenes where he has something to work with, but is too often given little to do.

I hate to sound so negative, because there really are times with Broadbent when the drama shows through. And the cave scene near the end, the one time when Gambon manages to get it right, is pretty spectacular on its own (aside from some lame CGI). Yes, it’s a well-made film, and there are several interesting transitions between scenes. Yates has managed to compose shots that evoke the darkness that the actual story doesn’t. So, I mean, overall I want to say that I liked it…

…but the numerous missteps are glaring. The whole mood of the film is off, and that’s a hard thing to overcome. And it’s especially disappointing, coming immediately after the revelation that was Order of the Phoenix. What went wrong between the films? Honestly, I was mostly just frustrated and disappointed with Harry Potter and the Half-Blood Prince.