Harry Potter and the Deathly Hallows: Part I 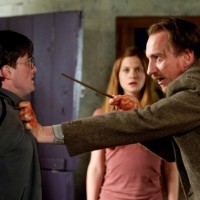 I’m just going to say it: this is the best movie in the Harry Potter series.

I was hugely impressed with director David Yates when he stepped in to helm Order of the Phoenix because he brought a darkness to the film that none of the previous filmmakers had been able to capture before. In addition, the actors seemed to have grown so much – Radcliffe especially had matured to a point where he was able to convey frustration without needing to scream into the wind about it; he could show it on his face. More importantly, Michael Gambon had stopped playing Dumbledore like he was Sophia Petrillo and finally made the wizard what he was supposed to be from the beginning: mysterious, wise, loving yet distant. Unfortunately, Half-Blood Prince, the follow-up, forsook everything that had made the previous film great. Instead of treating the characters with some sort of humanity, it was more inclined to make stupid jokes about Ron’s snogging habits. A rushed and clipped story didn’t aid this.

When it was decided that the final film, Deathly Hallows, would be split into two separate movies, it was easy to imagine that it was done for purely commercial reasons. There’s a fantastic review on Flixter that was plagiarized by a troll who goes by the name ‘Cassandra Chelios’. Yes, the review is stolen property (and maybe cobbled together from multiple sources), but it nonetheless perfectly captures the actual experience of watching this first half of the final chapter. “Yates has been able to take advantage of this extra time to give the story a certain amount of depth, sophistication and gravitas that was missing from all the previous installments.”

The majority of the film centers on the three central characters – Harry, Ron, Hermione – as they camp out in the woods, listening to crackling radio to hear about the horrors going on in the Wizarding world. Voldemort’s Death Eaters have taken control of the government, they’re rooting out those with mixed blood or who are sympathetic to Muggles. It’s a pretty blatant fascist-Nazi parallel, but I suppose there’s really nothing subtle about ethnic cleansing. What this means for the movie, though, is that our heroes are on their own. At one point, Hermione annoyingly says the phrase, “We’re alone now.”

So the three of them hide out in the woods. They watch the trees, they listen for enemies. They think about what they must do now, about how their lives have changed; they get angry or depressed or desperate. Unlike previous films in the Potter franchise, this movie is not driven by some extraneous influence. The characters need to find out where Voldemort’s Horcruxes are and destroy them, but figuring out where to even begin is a massive undertaking. This gives them plenty of time to think. The A.V. Club’s review criticizes this, saying that the “pacing is endlessly aggravating…the result is a herky-jerky movie that alternates glacial brooding with unwieldy chunks of exposition and frenzied, rushed battles.” Personally, I found this exhilarating.

Yes, there’s a lot of time where nothing much happens, where the kids sit in the woods and that’s about it. And yes, the chunks of exposition come swiftly and heavy – the battles are frenzied, they’re fast-paced and over before they begin. But that’s exactly what makes this movie the best of the bunch. The reality of the characters’ situation is brought to the forefront. They hide in trembling fear, unsure if their families are even alive, and every so often they get into a blinding battle. This is also the most violent film of the bunch, not in the sense that gory images are shown on-screen (although there are certainly a few), but instead in the sense that the wizard fights are shown in a more natural way. What has been the wizard battle from the previous movies when the most has been at risk? All I can think of is the moment in Goblet of Fire wherein Harry and Voldemort cross the streams of their wands to hold each other at bay.

Here, though, spells shoot out of the characters’ wands like fucking bullets. I have no doubt that that was the intent. You hear the magic whiz by the characters’ ears as they hit the floor, glass shattering and objects exploding all around. It’s chaos… which is exactly the point. They wait, they wait, they wait, they wait – and then a sudden burst of unintelligible violence. It really brings the terror of the situation home in a way that Half-Blood Prince never did. The few instances of terrorism that the Death Eaters planned out in that film were long shots of CGI bridges being destroyed with nobody being injured. Deathly Hallows has a car chase sequence where the audience is taken right into the middle of the action. Oh god, I wish that they had pushed the release date back and taken the time to give this movie a proper 3-D treatment. If any movie would benefit from it, it’s this one.

There’s so much to like. Where the last film was extremely immature with regard to the characters’ growing sexuality, this one is much more respectful. There’s one scene with Harry and Ginny – maybe it is informed by the increasing danger surrounding them, but the scene does not bother with some awkward humor about their relationship (well, not directly). They share a passionate moment together, something that the previous films would snicker at. In what is quite possibly the most sincere and emotional moment in the entirety of the series, Harry tries to raise Hermione’s spirits by leading her in a dance – alone, just the two of them. They rest their heads on each other’s shoulders, both imagining that their dance partner is another person. It’s a tender, beautiful moment that none of the previous films can even come close to matching.

The movie is certainly not perfect. The occasionally painfully obvious symbolism in the dialogue, whether the product of Rowling’s book or Steve Klove’s screenwriting, is awful. “Are you sure you knew the man at all?” a witch asks Harry, after informing him that there is more to Dumbledore’s past life than previously known. Ugh. And yes, the exposition does come quick and doesn’t have time to stop and explain things. The movie assumes that you know, for instance, what Parseltongue is and why it is important. It almost requires you to have read the book recently in order to keep up. Which could be considered a bad thing, I suppose, but it’s also easy to see that as the movie taking the characters’ reality very seriously. With the exception of a few instances when things are quickly explained to Potter (and, by extension, the audience), most of the time it is assumed that you can keep up.

It’s true that the story is not complete, of course. That should be neither an excuse for the movie nor a criticism. This chapter has a certain amount of ground to cover, and it does that in a more fluid way than has been achieved before. If there are a few things that bugged me about the movie, it’s small potatoes compared to the many many things that made it an extraordinary installment in the series. The acting, the cinematography, the brilliant use of the score vs. silence…

This is the best Harry Potter film. I want to see it again.

2 Responses to “Harry Potter and the Deathly Hallows: Part I”