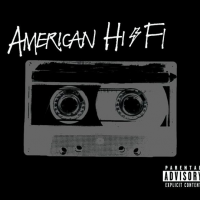 “Heavy metal rules!” a man says in a faux-interview before the video for American Hi-Fi’s one major hit “Flavor of the Week”, released a decade ago. The man continues: “Heavy metal definitely rules. Ozzy, Priest, Scorpions, American Hi-Fi, Dokken… it all rules!”

I couldn’t help but laugh. My wife and I, forever lost in nostalgia, have made it a habit of looking for songs and music videos from our youth on the internet. While playing this game back in April (yes, I’ve been meaning to write this for four months now), I thought of a band whose first album I had owned in high school and was greeted with that cold open. American Hi-Fi? Metal? I had to pause the video and catch my breath. The concept was patently ridiculous, as everybody knows that the band was little more than a pop-rock outfit, in the same boat as Tal Bachman – destined to be forgotten. After all, these are the same guys who have been serving as the backing band for Miley Cyrus the last half of the aughts, so how could they possibly go around calling themselves metal?

Then the drums start. Cymbals crashing to kick off the song, a crunching guitar following suit and heavy drum beats smashing down behind it. Crank up your computer speakers – or better yet, listen to this with the stereo cranked to the max in your car. This is not the same song I remember. Sure, there’s still the problem of lead singer Stacy Jones pop-punk voice. Okay, and maybe the lyrics aren’t exactly profound – one song on their second album begins with the cringe-worthy lines: “I can’t believe I hung around with you all this time / You drove me crazy with your OCD, girl you’re out of your mind.” Those complaints acknowledged, I found myself captivated. The next song I heard, “The Art of Losing” from their sophomore album trends even more toward pop, but it’s utterly infectious. It makes me want to throw a fist in the air, start a teenage riot of my own. So maybe American Hi-Fi isn’t metal, but you’ve gotta admit that they fucking rock.

Their debut album opens with the thrilling track “Surround”. Fading in with the feedback of an electric guitar coming to life, a simple melody plays before blasting out as heavy drumbeats make time. The sound is crisp and clean, perhaps not a surprise given that it was produced by Bob Rock (most notable for playing producer for Metallica). I resisted writing music reviews for a long time because I wasn’t sure how to talk about music. I still feel that way, really. I don’t know how to describe the way that the music pauses right before everything falls heavy into a pulsing beat, Jones growling the phrase “Better way”, without just linking to the song. Or how about the back half of “A Bigger Mood”, which sees Jones screaming “Go!” before rough guitars charge over thundering cymbals, another guitar noodles slickly, the music slows while a voice hisses that you’re always in the way, then the guitars crack back into overdrive again. How am I supposed to put that into words?

There’s not a song on the album that doesn’t put its heart into rocking as hard as possible. Take “Another Perfect Day”, for example, which got a ridiculous music video starring Patton Oswalt as the band’s follow-up single. The track starts inauspiciously, a gentle acoustic guitar playing while Jones notes that though he feels like dying, “I still believe it when you say it’s another perfect day.” As the song progresses, maracas slowly creep into the background and by the second verse, a slow and methodic drumbeat has joined the fray. On the edges, an electric guitar starts to rumble. By the mid-point, it’s all culminated together as the drums begin to thrash and the electric guitar kicks the acoustic off its pedestal, scrawling its cursive message over the song. And in what almost becomes the band’s calling card, the music stops momentarily before plummeting down into a drum solo to set it off again. Then there’s “Don’t Wait for the Sun“, probably my favorite track. It starts with a patient slow-jam, sharing space with an acoustic guitar so that both come through equally. Jones croons over the music, building volume only for the chorus lines, “Don’t wait for the sun, ’cause it could turn black any day… I never wanted this.” It’s after the second or third repetition of the chorus that Jones slams his fist down on the word this, the music shuddering into high gear, throwing its sunglasses on like a bad-ass and nodding ‘don’t worry, I got this.’

Even those tracks which seem to have a more straight pop angle like “I’m a Fool”, a song which begins with the band as a whole singing “doo-doo-doot, doo-doo-doot” over the opening chords, have a fighting spirit that a cursory glance might easily miss. Driven by the guitar, the song clicks into the earworm chorus like a roller coaster nearing the top of a monstrous hill before diving in. The bridge sparkles as the band provides an oooooh backing to junior-high-level lyrics about getting up the courtesy to ask a girl out on a date (“to the pharmacy, no doubt”) while soaking up the sun at the beach, but then immediately roars into a handclap-drum-pedal combo and scorches back to the hook.

Shockingly, four albums into their career (yes, the band is still making music!), American Hi-Fi haven’t lost their skill of producing songs which maintain that razor edge even as they trend more and more toward poppiness. Songs like “Acetate” verify that the band holds strong to that smooth sound, shutting down the music only to leap back in with fists flying. And then there’s stuff like “Frat Clump“, a testament to the fact that the band still has their thumb on the metal scene that they found influence in. It’s not hard to see why, back in 2001, critic Mario Mesquita Borges “stated that the future of rock & roll is surely guaranteed with acts such as American Hi-Fi.” Here in 2011, even if I’m the only one listening, the future looks pretty bright to me.