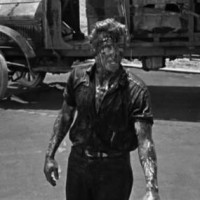 With a runtime of almost 3 1/2 hours, director George Stevens’ Giant feels suitably epic. The film chronicles the lives of three primary characters over the course of a quarter of a century, as they meet and grow used to one another and grow old with one another, and their children begin to do the same. Yes, the film has an epic scope – and a heady theme, too, about facing off against casual racism in the Southern territories of the United States. And though that theme is ever-present, it doesn’t stand in the way of the tapestry of personal drama that erupts as our characters learn to connect with one another over the years. So though the runtime can make a person balk at the beginning, once we get drawn into their stories everything seems to fly by all too quickly.

As the first hour sets the stage for what will come later, I found myself trying to determine who the main character truly was. Is it Jordan “Bick” Benedict (Rock Hudson), the wealthy Texas rancher who trainrides to Maryland in order to pick up a willful stallion and the girl who goes along with it? Is it Leslie, a girl “with a mind of her own”, who marries Jordan in a case of uncontrollable lust, then moves to Texas to begin her life anew with him? Or is it Jett (James Dean, surprisingly not a lady suffragette), Bick’s mumbling, scheming ranch-hand? The rising action of the film pinballs between the three of them, immediately showing Leslie and Bick arguing as they step off the train, about the way that the lower-class Mexican families ought to be treated. “Look at us,” Leslie muses, “standing here quarreling with rice still in our hair!” Jett eyes them suspiciously, always on the edges of the scene, and it soon becomes clear that he has a crush on our girl Leslie.

Now let’s stop here a moment, as the dietary staples of the Texas crowd (they eat calves’ heads, yuk!) causes Leslie to faint on the spot. Leslie and Bick (I swear, I thought his name was ‘Vic’ the entire time I was watching the movie) have obviously entered into a relationship that was built on a slipshod foundation. Their difference of opinions on the status of minorities is a huge philosophical rift that will be difficult for them to work around… and it comes up often. Bick talks with his sister Luz while herding cattle, telling her that the Mexican ranch-hands “understand plenty of English when they want to”. Luz agrees, adding that they would “sit around on their honkers all day” if she let them. How can a woman who loves the Mexicans so much that she is unwilling to let a child die ever hope to find solace married to a man who thinks of them as second- or third-class citizens? And then there’s Jett, who has his eye on Leslie and explains to her his disdain for the great state of Texas, due in part to the fact that they stole their land from that country to the south. My thought at this point, as I’m sure it is for all, is that Bick is a villain and therefore Leslie and Jett will find a way to be together.

Maybe that does happen, maybe it doesn’t. I’m not trying to detail the plot of the movie for you here; what I’m getting at is that there are certain things that the movie leads you toward believing about the characters, about the way that the plot will play itself out, and it rarely goes where you think it will – or at least, not in as straightforward a manner. Sure, there’s the odd ham-fisted foreshadowing device, like the one where Leslie and Bick’s young son chooses a toy stethoscope over a horse, signifying at age four his desire to become a physician in adulthood. And yes, the racism theme is fairly unsubtle at times. Overall, though, the movie rarely takes the easy way out. For instance: even though there’s some cathartic pay-off in Giant‘s climax, it is simultaneously tarnished by the fact that one can make a conscience effort to change themselves, but it remains difficult to deny the person you are. Perhaps “tarnished” is the wrong word; it’s this steadfast honesty that makes the finale rise above its sentimental posturing.

But below all of that is the much simpler, human tale of a group of people who grow into old age holding steadfast to the life that they thought they knew. As the movie heads into the second lap, Leslie and Bick have a litter of children who become just as important to the story as the three central characters (Dennis Hopper even plays one of the children!). They all bicker and fight and hold tightly to what they believe is right. They are affected by the people around them in different ways, and all the while Jett’s influence on the family grows – giving Dean the opportunity to play a disturbed tycoon, the Mr. Hyde to Citizen Kane‘s Dr. Jekyll. There’s no major action which drives the story, really. Though there are a smattering of fistfights and a funeral or two, these aren’t played as major events in the characters’ lives, but instead as small, sad moments. During one funeral scene, a small boy plays by himself in the sand outside the group of people who have convened for the service. The camera focuses on the boy, a reminder that life continues marching forward.

I took notes while watching Giant. I thought it might be best, since it’s such a long movie, to be able to point out specifics in my review. In this writing, I’ve preferred to stick to vagueness. I could tell you everything that happens in the movie, but the film itself is less about what happens than that it happens at all. When Jett finds his luck changing, it’s certainly a pivotal point in the film for the story, but it’s perhaps even more hard-hitting because of the way that this moment begins to delineate what is essential in the characterization of Jett. Jett isn’t just a ranch-hand, he’s the embodiment of so many conflicting feelings. Bick isn’t just a casually racist conservative – he’s a man whose values and opinions have been shaped by the life he has been given and made for himself. We can see the continuing patterns of influence in the way that the children grow into their own personalities, hewing closely to or shying away from their parents’ lives in various degrees.

So Giant is an epic journey. The setting rarely leaves one ranch in the heart of Texas, but the trip is limitless nonetheless.

One Response to “Giant”