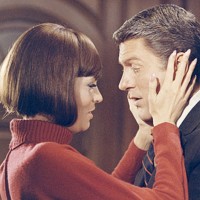 The most obvious comparison that I can make when discussing the Dick Van Dyke caper comedy Fitzwilly is to Ocean’s 11. Both movies center on a large group of people who are good friends with one another, working together to pull off monumental heists. Of course, the heists of the good butler Fitzwilliam (Van Dyke) aren’t nearly as elaborate as those of Danny Ocean and his gang, but the thrill of the game and the clockwork precision necessary are all there.

But the movie isn’t really about the robberies that take place, really, so much as it is about just enjoying the company. Fitzwilliam acts as butler to Miss Victoria Woodworth, and he leads a dozen other servants in crimes right under his employer’s nose. Perhaps her fondness for the man helps her to overlook his sometimes suspicious behavior. Regardless, both Woodworth and Fitzwilly himself profess their love for the other – not in a romantic way, of course, but in the fact that they care deeply for one another. Our titular butler smiles at his compatriots and sweetly calls them “children”, even the fallen clergyman who assists in Fitzwilly’s crimes against his better judgment admits that he swears greater allegiance to no man. So it is that when Miss Woodworth hires an outsider, one Juliet Nowell, to act as her secretary while she writes a dictionary of all the ways that words should NOT be spelled, it causes great consternation among the staff. Can we trust an outsider when we’ve got so many secrets to keep safe? If you suspect early on that Nowell will be an insider before all is said and done, well, you’re not entirely wrong.

But again, I think that getting too bogged down in specifics is a mistake. The one trailer I saw for Fitzwilly before watching the film describes exactly where the movie culminates – a masterful robbery at Gimble’s department store on Christmas Eve, a plan set in place so that the store would find it in their best interest to hand over all of their money willingly to the thieves. I guess you could go crying “spoiler alert!” now, but the movie hinges more on the congenial relationships between the characters. Some of the best scenes are not the big show-stoppers, wherein Woodworth’s footmen swindle a series of unsuspecting innocents, but instead smaller scenes – especially those where the secretary Nowell quips with her father about the goings on in her life. Their banter is playful and quick-witted and very much enjoyable. Add to this the charming personality that is Van Dyke, Edith Evans as the headstrong Miss Woodworth, and a scene-stealing John McGiver as the fallen priest with a penchant for self-abuse… it all makes for a cute little film that will leave you grinning.

Oh sure, there could have been a greater focus on the immorality of Fitzwilly’s actions, but the movie plays it off as no big deal – he’s stealing from insurance companies, primarily! A lot of it goes to charities anyway! The way that the main characters comes together seems almost too perfect, an easy out for an otherwise troubling scenario. Maybe the refusal to seriously consider the ramifications of the gang’s actions is part of what makes the movie feel slight. It’s fun, yes, but hardly necessary viewing and with little to say at the end. It moves too quickly toward the places we all expect it to go, with nary a surprising twist to show for it.

So the question, then, is this: is being slight a flaw on its own? I don’t really have anything bad to say about Fitzwilly, really, except that it doesn’t grab its audience the way that it might. If the filmmakers were seeking to make a film that was merely pleasant, only enjoyable, is that a problem? Is a film only worth the time if it breaks new ground somehow? Obviously, that’s not the case or else we wouldn’t see so many remakes getting the green light. So what is the drive behind a remake – and oh god, while we’re on the subject, isn’t it all too easy to see a 2012 Fitzwilly starring George Clooney? Maybe I’m still too influenced by the Danny Ocean comparison earlier, but I can all too easily hear Clooney chiding, “Children.” I’m getting off the subject here. Let’s take Spider-Man, as an example. We’ve just gotten through the Sam Raimi directed trilogy starring Tobey Maguire as the mutated super-man, and yet just a few years later we’re already being treated to another version – this time with up-and-comer Andrew Garfield in the title role. What could spur this tracing over the footsteps? Well, money, for one, but also the idea that perhaps there is something different that can be found in an otherwise over-done story by putting new people in charge of it.

That said, this movie deals in a plot not much different than probably several other heist films. It’s main differences are in the fact that the criminal group at the center are the waitstaff in a mansion, and – again – the utterly likable actors behind it. Maybe Fitzwilly doesn’t stand out in any particular way, but it’s warm and charismatic (as films go) and that makes it kind of great nonetheless. It’s hard not to really like this movie, even while realizing that maybe it’s nothing particularly special.

One Response to “Fitzwilly”