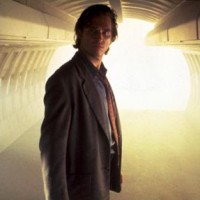 Fearless tells the story of a man who survives a plane crash and is changed by the experience. It is not about the plane crash itself, although we do get glimpses of the event in flashbacks throughout the film, but instead is about how Max Klein (Jeff Bridges) and fellow crash survivor Carla Rodirgo (Rosie Perez) react to what happened to them in different ways. Carla becomes emotionally distant, distraught, severely depressed. Max sees it as the best thing that has ever happened to him. He has seen death, looked into the void, and now he is fearless. Or is he?

The movie is held together by Bridges performance, which is difficult to read in all of the right ways. He holds a Mona Lisa smile on his face throughout the film, making it difficult to tell whether he has truly transcended this life and found something beyond, or has merely so horribly desensitized to life that he has given up on putting any effort into it. His wife complains about his robotic truth-telling, he looks longer at the things around him, he stops to enjoy the simple pleasures in life – like strawberries, the forbidden fruit.

I guess you could say that the movie is slow, in the sense that if you’re sitting there waiting for something big to happen, it isn’t coming, at least not in the way you might be expecting. Perhaps I’d be better restating the premise: the movie is not about what happens to Max and Carla, but instead about what happens inside Max and Carla. It’s amazing how many scenes there are in this movie where characters struggle to explain how they are feeling. In how many other movies do characters spend so much time explaining their thoughts to one another? In how many other movies do characters even spend this much time thinking, contemplating their lives and their place in the world? There’s a great scene early on in the movie after Max has recently walked away virtually unharmed from the fatal accident. He rents a car and takes it out on the open road. Leaning out the window and feeling the wind in his hair, he pushes his foot down on the pedal until he’s going 70, 75, 80, 85. The scene cuts to a wide shot showing the car as little more than a speck on a wide, empty road. Despite the fact that we the audience saw the increasing speed of the car, it looks to be hardly moving from here. I think that simple moment does a good job of capturing the whole of the film.

It’s about perspective. It’s about seeing things in a different way. Many people, after the accident, see Max as a brave man because he selflessly helped many people out of the wreckage. The media nickname him “The Good Samaritan”. Those who he touched see him as a kind of savior, his wife sees a stranger in her husband’s body. As for Max himself, he sees a ghost. What does a ghost do? Ghosts don’t travel the globe, seeing the things that they missed when they were alive. No, ghosts haunt the places that they knew best; likewise, Max starts his journey after near-death by visiting his past. He lives the movie in the past, too, despite telling his wife adamantly that he cannot live in a memory. There are the flashbacks, of course, but he also discusses the relationship he had with his father in great detail at one point, and he later insists that Carla join him in buying gifts for the dead. What I mean to say is that there’s a deeply emotional center here, sold most effectively by Bridges – and Perez – in their performances, but equally strong due to the choice of elements that have been included.

So Fearless is a very thoughtful film. I like that. I like a movie that leaves you considering it once it’s over. There is a lot to consider, many small moments that might hold so much more depth. The scene in the car, as I mentioned. When Max walks out of a cornfield at the start of the movie, he is cradling a baby in one arm. This was a choice on the part of the filmmakers, but why? Perhaps the idea is that Max did not come close to death, so much as he came close to life. It’s become a cliche now, the phrase “Come toward the light”. In general, the phrase is connected to the image of a dying person approaching that finite edge of their mortality, wherein a beautiful light will overtake them and they can sink out of consciousness. Here, Max uses the phrase to lead the other surviving passengers out of the darkness of the smoke-filled hull of the airplane and into the daylight of the world outside. Maybe it’s a mistake to think of it as one or the other, come to think of it. Maybe it’s both. When the airline’s hired psychiatrist tries to help Max, he introduces him to Carla – the idea being that her depression coupled with his detachment might even the both of them out.

The careful construction of the movie is key. There is a difference between Max saying to himself “You’re not dead” and Max saying aloud, “I’m alive.” The subtle shades of meaning between those two lines is where the heart of this movie lies. Fearless is a great film that deftly explores many heady and sensitive subjects in the exploration of life and death and human relationships. I’m so glad I got a chance to see it.