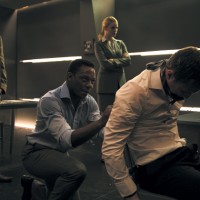 I was impressed by the trailer for Exam. It showed a group of people held together in a room with a few simple rules, possibly for the sake of a secret service job or some sort, and expected to complete a test. But when they look down at their papers, there is nothing to write, no instructions, nothing. Now it’s up to the group to figure out what the answer to the unwritten question is, and things are pretty much guaranteed to get out of control before all is said and done.

Unfortunately, the movie doesn’t live up to its promises in practice. The first and most noticeable problem is the acting. The movie starts by listing names one by one: Adar Beck, Luke Mably, Jimi Mistry, Gemma Chan. I thought that these were the character names, as dreamt up by a third-rate screenwriter, but it turns out that they are the actors’ real names. They are all relative unknowns, or at least unknown to me, and their ability directly corresponds to their fame. The actors lack any sort of charisma or chemistry, and though they spend time working together and against each other, there’s never any sense that there is a real reason that the characters would choose to behave one way or another. They are all defined by some skin-deep characteristic that they have – they go by nicknames like Blonde, Black, Brown, Brunette, etc. – and none of people behind these characters bring anything to the table to make their character have any definition beyond this facile indicator.

But then, a lot of the blame can go to the script itself. Are people really going to go mad trying to solve a puzzle in eighty minutes? Maybe so, given the dangers that this elite group have encountered getting to this position, but what they are doing and how they got there is never explained. In fact, it’s often pointedly ignored. That’s what you get when you start with a gimmick and a title and work backward from there. None of the characters know what sort of job they are even competing for, and though they are all shown covering injuries early on, this is never spoken of again unless you believe that a brief mention of the characters’ struggle to get to this current stage in the selection process constitutes a complete explanation. It’s hard to care about the characters without any idea what the hell is going on, or even if it takes place in our world. They refer to one man as the “evigilator” without blinking and mention a disease over-taking the world off-handedly. One character is inexplicably monstrous to his colleagues, just because he’s that kind of character. And I can’t stop thinking about the scene where the candidates realize that they are allowed to speak to one another during the exam. “Now you’re talking!” Black exclaims. Ugh.

The writing is perhaps more offensive than the acting for much the same reason that the awful Christian film The Genius Club failed so miserably. In fact, thinking about it now, the two movies have very similar plot-lines. These people are supposed to be the best of the best, you know? They’re the brightest, the strongest, the quickest, the most committed and talented and… and yet they all act like morons. One of the candidates has to go into a detailed explanation of what “infra-red” lighting is because the rest of the people in the room don’t understand that light comes in differing wavelengths. Or the best idea that they can come up with is to try looking at their papers with different kinds of light to see if a mystery question appears on it. The majority of the movie consists of the characters bickering over the semantics of their instructions (“If you spoil your paper in any way, you will be disqualified”) and holding their papers up to the light.

I didn’t find much to like in the bulk of the film, as you can tell. There are those who do find the movie to be a gripping psychological thriller, in the face of all evidence to the contrary, but even those poor souls are unable to defend the finale. Philip French, of the UK’s Observer, speaks highly of the film but even he admits the movie’s limitations when he says, “The tale is ingeniously developed, the suspense well maintained, and you’ll think more highly of it if you have to leave five minutes before the disappointing pay-off.” The whole movie seems to be working toward this big finish – there’s a freaking stopwatch counting down the seconds until zero. When you get there, there’s got to be some kind of masterful revelation, yeah? The “job” that the candidates are competing for remains undefined, the person behind the company who set up the job feels utterly useless, and the winner is decided less on skill or intelligence than on ticking the other characters off and settling on whoever is left.

Exam looked cool, but it’s not. It starts with a bang, er, I mean, it starts with a few people silently gathering in a small room, and ends with a whimper. There’s nothing to see here.

SPOILER: I can’t end this review without noting that there is literally a scene in the film where a man gets shot in the heart – plugged in the chest with a bullet – and is cured of disease instead of dying from his bullet wound because there was medicine inside the bullet. It don’t get much more dumb than that.