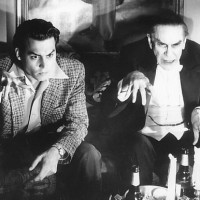 A fellow critic of mine, Ann Driscoll, is notoriously contrarian – although I’m sure she’d disagree with that assessment, ha! – but her take on Tim Burton’s biopic is very persuasive. “Ed Wood feels like more of a caricature,” she says, “which enables the film to pay an easy tribute to him because it does not delve into the unpleasant complexities that plagued him.” A caricature indeed, as Johnny Depp, the man who played the man behind Plan 9 from Outer Space described his method for playing the character: a little bit of Ronald Reagan, a pinch of the Tin Man from The Wizard of Oz, and a smattering of Casey Kasem. I paraphrase, of course. But yes, it is because of this that it makes it hard to derive any deeper meaning out of the film. All the while, watching the film, I was trying to derive some meaning out of the thing. About the only meaning I could find was this: Ed Wood was a weird guy.

That’s not to say that the movie is short on drama. Wood’s friendship with the long-past-his-prime Bela Lugosi is heartbreaking, and the way that Wood (the character, at least) kept his sights set high in the face of what others might consider insurmountable obstacles is certainly compelling. But this comes at the cost of a certain level of realism, which is odd, considering the fact that Wood shunned professional actors and second takes precisely because he hoped to capture some kind of realism. There’s only one real time when the director seems to be reaching a pivotal moment, a place where the pressures of those pushing at him seem to have converged and overtaken him. That scene, that brief feeling, is not indulged; instead, it’s played for a laugh. How should we react to a character like Ed Wood? Are we meant to pity him? To marvel at the relentless positivity of an untapped genius? Or are we just supposed to have a laugh? There are times when the movie reaches toward each of these goals, but it seems to settle for the third. He’s got charisma, but little else.

Don’t think that I didn’t like the film, though. I truly enjoyed it, and a large part of that was because of the thrilling performances by all of the actors involved – in particular Depp, Martin Landau, and Bill Murray. Ed Wood was released during a period where Johnny Depp hadn’t gotten stuck playing Jack Sparrow over and over and over again, a time when the actor could disappear into whatever role he was playing, and Wood was just the right kind of eccentric individual for Tim Burton’s go-to guy to take on at that time.  Landau’s Lugosi is the most engaging character, both exceedingly needy and markedly proud. His relationship with Wood is a comic one, in some ways, but also the emotional center of the movie – one that is not matched by Wood’s two romantic relationships (Patricia Arquette is altogether forgettable). There’s a fondness between the two show biz outcasts, a deep love and respect for one another, even as the one uses the other and vice versa from the very beginning of their friendship. Lugosi needs a car, Wood needs a star. C’est la vie.

Most stunning of all, though, is Bill Murray. I once coined a phrase to describe Bill Murray’s general lack of acting: “The Bill Murray Effect”. Another notable star who suffers from the BME is Anthony Hopkins. Murray is an actor who tends to just play himself, who does not put a lot of effort into his roles, but skates by on his general likeability alone and does not usually get asked to do much. Granted, he’s done a few roles that pushed him beyond his boundaries – most famously in Caddyshack – but too often he seems to have been hired just to play Bill Murray. Here, Murray plays the gay man Bunny Breckenridge and is spectacular at it. He refrains from playing the character as a stereotype, although there is some element of that that is unavoidable, and ends up playing the role that Criswell might have otherwise: the one who is most detached from the absurdity of their collective lives and therefore able to totally enjoy the ride.

Murray also has the most hilarious lines, which is a point that I have surprisingly forgot to mention until now. The movie is very funny. Wood’s cast of misfits become their own little rag-tag family, and by the movie’s end, they all act just as a family would. When the group is waiting to be baptized (a prerequisite in order to get funding for Wood’s opus), they are uneasy by the addition of a chiropractor to their group, sitting in for Lugosi. The good doctor keeps repeating standard vampire cliches, trying to get into his role. “Let’s hear you call Boris Karloff a cocksucker,” Bunny says, sending the rest of the group into giggles. It’s a funny line on its own, funnier still because of Lugosi’s repeated insults at Karloff, and finally fantastic because it’s said in a way that reveals the warmth that the group felt for the man. He was the “star”, but he was ultimately one of them. The humor of the film often comes in the characters’ bizarre sincerity.

Perhaps the movie could have been done better, could have given us a clearer picture of who Ed Wood is – whether the tortured genius or the befuddled buffoon. There’s a lot to the man, as a person, and the movie begins with the intent of divulging the famed director’s many facets. In the end, it shows him as a genial and funny guy, but not much else. It works, yes, and it’s very enjoyable, and in fact it’s just a gorgeous film to view. In the end, though, the drama is there… it’s just not doing much of anything.