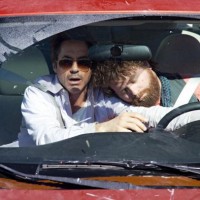 Let’s not mince words here, because there’s not a lot that I feel like I have to say about Due Date. It’s like the sick, warped version of Dinner for Schmucks, maybe. It’s exactly what you’d expect from a road-trip comedy made by the guy who did The Hangover. In that respect, although it occasionally made me laugh, the movie is not really anything special. Just to fit a few more italicized words into this paragraph, comparisons to Planes, Trains, & Automobiles are apt, as this movie is little more than a re-tread of that film, only with more F-words per capita.

But! Here is the thing that intrigues me somewhat about the movie. In a way, the movie reminds me of the work of Jody Hill (“Eastbound & Down”, Observe & Report) because of the way that really serious things happen to break up the light comedy. The most obvious example that I can point to here is a scene wherein Zachy G. falls asleep behind the wheel of an automobile. Instead of a zany car crash where passenger Robert Downey, Jr. wakes up as the car rolls across a field of cows or something like that, the movie opts instead to show the car crash through a guardrail, flip through the air, and smash down on the pavement with sparks and broken glass. It’s a remarkably “real” moment in an otherwise carefree comedy.

I guess that’s the only moment I can think of, really, that exhibits this tendency. Maybe I’m reaching too much for something to like. It’s just… look, there’s nothing that particularly wrong with the movie, but it doesn’t engage either. Where director Todd Phillips’ last film got mileage out of cute references to Mike Tyson, this one settles on “Two and a Half Men”. Galifianakis’ character has a series of strange quirks, and always straddles the line between being too much to handle and so hopelessly pathetic that it’s hard not to feel bad for the guy. Or, well, that’s what the movie wants you to think. Downey waffles back and forth between feeling great kinship for his traveling companion or absolute loathing, but the movie doesn’t really make a case for why Downey would feel any sympathy for Galfo, save for the fact that he’s like really upset about his dead dad, man. To be fair, Galfo is a much better actor than I’ve given him credit for in the past (his monologue from The Godfather may be better than Brando’s version), and the times when he has to exhibit the emotions of a scarred and lonely man are spectacular even if they don’t make me feel any different toward the character in general. But seriously, like a lot of comedy actors – Robin Williams, Jim Carrey, Adam Sandler – I really feel that a movie where Galfo plays a primarily serious role might allow me to have a lot more respect for the man than I currently do.

Anyway. Stuff happens. Danny McBride, the Nikki Minaj of the movies, shows up for a cameo appearance and fails to deliver much. And pretty much every scene pertaining to Galfo’s father’s ashes is stretched to the point of breaking from the stress of being so unfunny. Perhaps if I hadn’t seen the coffee scene so many times in trailers and commercials, the moment would have felt more compelling than it did, but sadly, no.  Am I being too hard on the movie? Before you answer that, may I note that it begins with a painfully obvious dream metaphor that can be easily explicated before seeing any further than the very first scene?

It’s not a lack of subtlety that’s the problem, but it is that everything is laid out too easily for the viewer. There is no depth to any of the characters. Let’s look at Downey’s character, who is supposedly a loving husband who is in a hurry to get home to see his wife before the birth of their child. All we get to see of him, though, is the cruel and exasperated side that has trouble making the trip cross-country. Galfo’s character is entirely unbelievable most of the time; unless he suffers from some mental illness that prevents him from understanding the meaning behind words, his giggling at Downey’s story about the last time he saw his father is absurd. And he considers himself to be Downey’s best friend? That’s the bigger issue, I think, right there. In keeping with the lack of subtlety, the laying everything bare on the table, Galfo literally announces that he and Downey are best friends, as though to explain the transformation between the characters to the audience. But are they? Has the movie sold that at all?

Due Date is acceptable, that’s the most I can say for it. I’d like to find something more to like in it, but there’s not a lot. There are some funny moments, but as a whole the movie misses. I’d like to say that I do hate Due Date, just for the sake of a pun, but the truth is far more tepid. It’s okay, just okay.