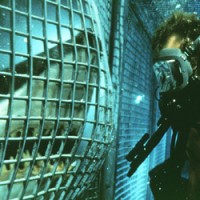 Directed by Renny Harlin (Driven, Die Hard 2, Cutthroat Island), the genetically mutated shark horror/thriller B-movie Deep Blue Sea could have been just awful. After all, it’s hard to live down the fact that you’re the one who made Cutthroat Island, which even the Guinness Book of World Records lists as the biggest financial loss in all of moviedom. But there’s a spark here, something that makes the finished product rise above its wearisome premise. It’s not the actors – all of the I-know-that-guy’s-from-something variety, with the exception of Mr. Samuel L. Jackson; though they remain vaguely recognizable, there’s not a performance here built to move the audience. And it’s certainly not the plot itself, which asks you to suspend your disbelief enough to accept that anybody (in the name of scientific advancement or not) would be stupid enough to genetically engineer super-intelligent killing machines. I could point to the best scene in the film and describe how it functions to make an awesome statement at just the right time, but I don’t want to ruin it. So let’s just say that the reason the movie works at all is because it’s smart enough to not take itself seriously, but serious enough not to devolve into absurdist parody.

Foreshadowing our eventual ape overlords, three sharks have been mutated (in direct violation of international don’t-make-super-smart-sharks treaties) in an attempt to find a cure for Alzheimer’s disease. Of course, it’s really the work of one or two “mad” scientists, mostly mad because they’re about to lose funding. They’ve been operating on Samuel L. Jackson’s dime for years, building a thoroughly sophisticated underwater research facility in the middle of nowhere, and have had little to show for it. So in a last-ditch attempt at rescuing their laboratory – and, incidentally, thousands of people who suffer from a debilitating illness – the head researchers push the pedal to the metal, quadrupling the size of the sharks’ brains in order to extract the most syrupy brown Alzheimer’s cure from their brains as possible. But wouldn’t you know it? A series of coincidences leads the fish to break the underwater glass window of the facility, flooding the tightly-locked building and allowing the monsters access to the inside. Oh, and they seize control of a helicopter and smash it into the portion of the lab that is above sea level, setting off a gigantic explosion and perpetual flames. Don’t ask me how sharks seize control of a helicopter, they just do.

And so this is where the action begins. For the humans, it involves a lot of screaming in fear, looking around nervously, sloshing through waist-high water, and occasionally dying from shark attacks. The characters are limited to basic signifiers: there’s Tom Jane’s roguish ex-con, LL Cool J’s foul-mouthed bird-befriending religious nut, Sam Jackson as the guy who once got trapped in an avalanche, Jacqueline McKenzie as the marine biologist (duh), and so forth. This is all we need to know about the people on the screen in order to understand their motivations. We don’t need to identify with them any more than that because the thrill of the film is in seeing who will survive and how they will react, not in getting to know them or any of that boring stuff. For me, a lot of the thrill of the film is in seeing if I can hold my breath as long as the characters do when they deem it necessary to dive underwater.

Come to think of it, there’s not a lot that makes the movie feel unique aside from that one remarkable scene I alluded to earlier. So maybe I should take a different tack here and admit that the movie doesn’t rise above its premise – it matches expectations by being dumb but entertaining. It does excel exactly one time, but it’s such a major pay-off that the moment latches into the memory as a sign that the film has self-awareness. That helps us overlook the fact that Deep Blue Sea prominently features a swearing parrot. Never Forget.

Perhaps the most egregious concept, though, is this idea that the sharks are intelligent. Just as when screenwriters throw in a hyper-intellectual human, it more often than not comes across as exactly what it is: dumb people writing for what they think a smart person acts like. The same rule applies here. The screenwriters want to make it seem as though the sharks are so smart that they can piece together a plan to escape their titanium prison, but then in a fit of.. ahem.. artistic license, allow the animals to be so stupid that they mistake an empty oxygen tank for a human being. It’s easy to forget that they’re supposed to be smart at all, in fact; a lot of the reason the actors have to struggle to survive isn’t because of anything the sharks are doing specifically – instead, it’s because the water keeps flooding in. Perhaps the movie just means that the sharks have become as smart as the humans they’re after, in which case I can see the similarity. There’s a moment in the film where the human characters have to swim to the surface as quickly as possible. They break through the water, take a deep breath, and.. what, they’re safe now? In another super sexy moment, mad scientist Saffron Burrows throws an electrical wire into the water in order to combat the cold-blooded killer creeping up, because apparently water is only a conductor if you are a shark.

Yeah, there’s not much to Deep Blue Sea. It’s high-octane entertainment with little depth or style. It gets the job done much as any number of latter-day monster movies might, with a few laughs scattered in between. Aside from a single sign of original thought which makes up maybe 6.56 seconds of the movie’s run-time, this is pretty standard fare.