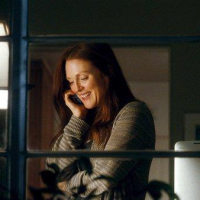 I almost don’t know why I’m writing a review for Crazy, Stupid, Love. The movie lived up to the expectations that I had going in, which is to say that it’s a relatively tame comedy about romantic entanglements that doesn’t seek to do much beyond be vaguely heartwarming and generically pleasant. Despite the fact that the film is adorned with name-brand stars – including Steve Carell, Julianne Moore, Emma Stone, and Ryan Gosling – the movie nevertheless comes across as though it’s just going through the motions. It hits some unexpected beats, sure, and comes complete with its own bizarre brand of moralism (more on that in a moment), but otherwise fails to deliver more than a few warm chuckles.

But the film is pleasant. It’s a movie that opens with a couple, married twenty-five years, coming to the end of their relationship at a fancy restaurant. The camera sweeps below the tables of the other couples in the restaurant, all of whom are playing footsie except for Cal and Emily Weaver (Carell and Moore, respectively). This imagery is a simplistic way of describing the problem in their relationship: the romantic spark is gone. So the two call it quits after a quarter of a century of wedded bliss, and each begins their life anew. Emily begins dating a co-worker; Cal begins going out to a bar which caters primarily to twenty-somethings, which is where he winds up under the tutelage of Jacob (Gosling). Jacob is a lothario who takes pleasure in seducing a different woman each night, but he’s feeling a bit altruistic in response to Cal’s sad-sack moaning and is willing to share the secrets of how to bed complete strangers.

It’s fun for the whole family! Actually, though the film is at its heart a sex comedy, it is curiously devoid of any sexuality. The closest anybody comes to consummating their relationship on-screen is when Jacob brings home the spunky Anna (Stone), but the two end up doing the horizontal chat room, which is to say that they just talk to each other all night because it’s about a relationship, man, not about sex. This whitewashing of what’s really going on in the lives of these characters allows for a strange subplot about the attraction that the Weavers’ teen-aged babysitter has for Cal. Now I’m not saying that a movie has to include explicit images to be compelling, but the way that the movie looks the other way makes for a curious disconnect. Because Cal knows about Jacob’s nefarious ways, he makes an attempt to dissuade Anna from continuing to have a relationship with him; to the viewer, this jagged betrayal of the two men’s friendship seems peculiar.

But most distressing is not the limited picture of the events which take place. Instead, it’s the frantic, sappy moralizing that takes place as the movie begins to draw nearer to its close. It wants to talk in terms of “soulmates”, the idea that there is one person in the entire world who is perfect for you romantically. The film proffers two options: either everybody has one ideal soulmate, or love is a lie. This is elaborated on in a last-minute speech delivered by Cal which is intended to draw delighted tears from the audience and, more importantly, wrap everything up in a bow of seeming intelligence. The concept of “soulmates” is a particularly offensive one, when you stop to consider it, because it rests on the assumption that two people are fated to end up together, rather that their respect and appreciation for one another helps them through the rough patches in their relationship.

Yes, the warm ‘n fuzzy finale bothered me. I don’t know whether I feel comfortable saying that I had been impressed by the movie prior to that, but I do know that the awkward way that these parting thoughts were stuffed into the film made for a depressing last half. I personally would have preferred if the film had ended at that juncture which is typical for all romantic comedies: when the couple has overcome previous obstacles, but break apart in a terrifically final way due to some laboriously mixed messages. This is the romantic comedy version of the killer coming back to life briefly after all of the campers believe him to be dead. In any case, if the film had ended on a more despairing note I think it would have really served the story well: with some of the couples profiled in the film still together, others sadly dismantled. It would have really added depth to Cal’s words to his young son, when asked why he doesn’t make bolder attempts to salvage his marriage: “It’s more complicated than that.”

The film opts to take the road more travelled, however, and thus – spoiler alert! – everybody lives happily ever after. It’s not challenging, it’s not even particularly interesting. But I liked this Carell guy on “The Office” and for the ladies (because, let’s be honest, there aren’t a lot of guys dying to see Crazy, Stupid, Love) there’s an extended sequence where Ryan Gosling takes off his shirt and the camera travels up and down his muscular abdomen. I mean, there’s some funny shtick – a brawl that erupts on a miniature golf course is especially humorous, and the film makes good comedic use of the knowledge about the varied relationships that the audience has. Also, Carell and Moore have great chemistry together. They bounce one-liners off of one another like a real couple; it’s unfortunate that the movie doesn’t give them sufficient time to develop this chemistry into something more meaningful, instead slapping them together again at the end of the film because of a clumsy speech.

Overall, the movie aims squarely for mediocrity. Neither overly comic nor overly dramatic, it pushes no envelopes and achieves nothing. Even a notoriously lazy actor like Gosling can look presentable here because the film doesn’t ask for anything too demanding. Carell, be mopey and cynically sarcastic; Gosling, do that coy smile you only know how to do; Stone, play that charismatic girl-next-door type you’ve perfected; Moore, um, make a few appearances in the film.

Still, I feel mostly positive about Crazy, Stupid, Love in spite of how transparent it is. It only needed me to feel mostly positive. It only needed me to be able to say to my friends, “Uh, yeah, it was okay.” It was okay. Neither good nor bad, this movie should appeal to the average moviegoer. If you’re looking for a movie that will really make you feel neutral this holiday season, look no further.