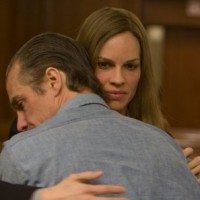 The standard synopsis of Conviction will explain that the film is about a woman who never graduated from high school that nevertheless gets her GED and then goes to law school in order to get a law degree so that she can represent her brother in order that she will be able to re-open the case for which he was tried and convicted of murder in the first degree in an effort to get his conviction over-turned. This brief synopsis only grazes the deeper meaning of the title, and thus does this beautiful film a disservice.

What impressed me about the movie is that it does not push its plot on the audience. I don’t know if that makes sense. Instead of making the movie a race against the clock, it is simply a race against frustration. Betty Anne (Swank) is convinced that her brother is innocent of the crime he is in prison for, so she is willing to do whatever it takes to free him. Her conviction on this subject is so strong that is affects the other relationships in her life. Her husband finds it difficult to deal with, telling her that she needs to accept that her brother Kenny (Rockwell) will be in jail for the rest of his life. Similarly, Betty Anne’s two sons don’t know how to react to their mother’s focus. In one particularly moving scene, Betty Anne is having a difficult time gathering evidence from the case and it is visibly wearing on her. She labels it a mere ‘setback’, and her younger son stares wide-eyed across the dinner table at her. The mixed emotions of the scene is apparent.

Which leads me to the primary reason that the movie works, despite maybe feeling at times like it is predictable: the performances. Swank is commanding in her starring role, as is Rockwell. When they are together, their chemistry is dynamite. There are moments where Betty Anne has to deliver bad news to her brother in jail and he is not allowed to stand up or have physical contact with his sister. The way the actors exhibit emotion here reminded me of some of the best scenes in Atonement (one of my favorite films).

Because the actors are so great, the relationships between the characters seems real. Betty Anne finds a friend in a fellow law student who is older than most of their classmates, played by Minnie Driver. Aside from a few lines of movie-ish dialogue, their friendship comes across as genuine and warm. And though there are those moments that can induce groans, like the line from the trailer where one of Betty Anne’s sons admits that he would do for his own brother what his mother had done for hers, the majority of the time their conversations are better constructed. They’re her children, but they are intelligent enough to understand their mother’s goals and to respect that – and she, likewise, treats them with the same respect.

The movie does succumb to some of the pitfalls of films like it. The sentimental music gets ramped up further into the run-time, which can be a bit grating when you are thinking about it. There are several flashbacks to Betty Anne and Kenny’s childhood which are hit or miss. Sometimes they work well and add depth to the fight that the siblings are putting up now, but at other times these past events come across as much too contrived.

So. In the end, Conviction is a wonderful movie that isn’t trying to make a bold statement or knock you over with style. Its heart is in its strong performances – oh my god, I can’t believe I haven’t mentioned yet the amazing scene with Juliette Lewis for which she absolutely deserves an Oscar nomination – and in its mostly human relationships. The movie’s goal is not to answer the question of whether or not Kenny is the killer, nor is it really about whether Betty Anne will be able to collect enough knowledge and evidence to overturn her brother’s conviction. Instead, it’s about not giving up in the face of immense adversity and relying on those close to you to help you get through.

It’s a much simpler movie than its synopsis would have you believe. Yes, Conviction is great.