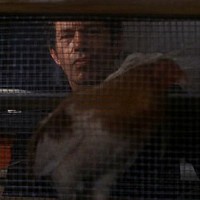 Here is the reason I rented Cockfighter in the first place: I had to rent a second video in order to use my debit card at the video store. I saw one in the ‘cult classics’ section with an in-ta-riguing title and a synopsis that spoke of a cockfighting champion who vows not to speak again until he wins the highest honor in the sport – the Cocksman’s medal. If I have to rent a second movie, why not this one?

The film has a remarkable 100% on movie review website Rotten Tomatoes, sharing that honor with few others (The Godfather and Toy Story 2 are the most famous examples). The reviews gush:
– “This is a blood and guts art film with unforgettable intensity and stark scenes that few films have managed to capture with such fervor.”
– “A great film with a masterful silent performance by Warren Oates.”

Unfortunately, the film doesn’t live up to the high expectations set by the five total reviews on RT. It’s directed by Monte Hellman, who apparently made a name for himself with 1971’s Two-Lane Blacktop, a film that has been included in the prestigious Criterion Collection (The 400 Blows and Armageddon are the most famous examples). Perhaps it is because of the good will generated by this earlier film that critics are willing to give this movie the benefit of the doubt. But from the opening credits, which announce that the film was produced by B-movie legend Roger Corman, it is clear that the movie’s goal is not to provide any great social or moral layers to the story: instead, it’s about watching some cocks fighting.

Well, I take that back. The story is about a man named Frank, a champion cockfighter who doesn’t really seem to have any talents in the sport – he’s more of a compulsive gambler than anything. After losing a weird slow-motion cockfight in a sleazy motel room and being yelled at for talking too much, he vows never to talk again until he has won the Cocksman’s medal, the greatest prize a cockfighting man can hope to secure. His commitment to silence involves slapping his knee with a cowboy hat to denote laughter, and holding up his fingers to symbolize ‘five-times-four’ in order to declare the price of a chicken $100. The few reviews of Cockfighter tend to praise Warren Oates’ silent performance, but I fail to see any great accomplishment in it. In fact, the few times that he does speak in the film are probably a lot better acted than the hokey silent treatment. Plus, the movie cheats by having Frank provide an awful narration for the majority of the film.

Then there is the world of cockfighting itself, which is not shown with any glamor. The sport is populated by rednecks and shysters, dirty people who crowd around little patches of dirt to watch birds claw at each other. This is seen by many as a satire of the sports genre which was gaining popularity at the time of the film’s release, but that reading is hard to find compelling. I guess one could say that the seriousness with which the movie takes its sport is commendable – before there is a single fight, there is the long process of grooming and training your chicken. The movie doesn’t laugh once at the over-abundance of the word “cock”, despite the fact that its viewers certainly will. But this same seriousness is a hindrance for a movie that offers little to keep viewers interested. The previously mentioned slow-mo cockfight is the highlight of the film, whereas most of the other fights are real-time and uneventful. The movie may have really benefited from a sense of humor: there is literally a character in the movie whose single role is to be ejected from a cockfight for sticking his finger in a cock’s ass. Imagine putting that on your resume.

So the movie is boring. There are a few actors included who went on to become bigger stars (Harry Dean Stanton and Ed Begley, Jr., are the most famous examples) and, again, those positive reviews go out of their way to dole out praise for their performances. Neither make much of a mark, though; they don’t elevate the movie except for the fact that now you can go, “Hey! It’s that guy! I’ve seen him in other stuff!” The characters are otherwise flat, with unclear or stupid motivations. There’s not a single person in the film to get behind. We’re supposed to see Frank as a hero, I suppose, but he is as lifeless as the rest of the cast. Another suggestion: maybe this could have been corrected by giving some sense of Frank’s growth as a cockfighter and as a man. As it stands, he just keeps doing the same thing over and over and then the movie ends.

Did I miss something here? Is Cockfighter a devastating social satire, a black comedy classic that ought to be held up as an example for its understated brilliance? All I saw was a lame movie that went nowhere. It’s not so much offensively bad – aside from its animal brutality and broad racial stereotyping – it’s more just heartless. It may treat the sport of cockfighting with seriousness, but it fails to treat the man at the center of the story with that same seriousness. I can’t see how this film can deliver on any level – whether taken as camp or as an art film.