Christmas with a Capital C 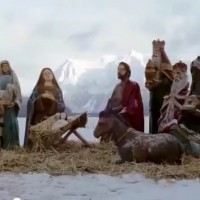 Christmas with a Capital C

After seeing the trailer for Christmas with a Capital C, a friend wondered why the film had not been titled “The Mitch That Stole Christmas”. It’s clear from the trailer that this is the broad structure that the film is working from, as awful godless lawyer Mitch Bright (Daniel Baldwin) returns to his small Alaskan hometown only to wreak havoc on the holiday spirit that has been a tradition for half a century. He files a complaint about the town’s public display of a nativity scene, rightly noting that the town government displaying these items is government endorsement of one religion, something expressly forbidden by the United States Constitution as traditionally interpreted. There’s some suspicion that Mitch is there simply to stir up trouble during this special time of the year, and one little girl continues to bring him cookies and good tidings in spite of his spiteful ways.

That’s from a surface-level look at the film, but digging a little deeper finds richer characters than one might expect. The story is told largely from the perspective of Dan Reed, mayor of little Trapper Falls. He and Mitch were fierce rivals in their high school days, whether it came to sports or the ladies, and so Dan takes Mitch’s sudden arrival as “highly suspect”, thinking it a personal vendetta. When Mitch tells Dan that his public expression of his religious beliefs has the tendency of turning people away, Dan takes it as another personal attack. Perhaps it is, in some ways, as Mitch seeks to court the townspeople by getting them to rally behind his message of religious equality. Many of the townspeople find themselves convinced by Mitch’s big-city “reasonableness” and decide that there’s no harm in being more inclusive, using phrases like ‘Season’s Greetings’ and ‘Happy Holidays’. Who could possibly object to being more inclusive?

Well, the mayor, for one. He grits his teeth with steely determination when he sees a ‘Season’s Greetings’ banner being hung up, all but declaring, “Not in my town.” Even more riled than the mayor, however, is his brother Greg (Brad Stine). When Stine isn’t playing the part of the poor man’s Robin Williams – to claw-your-own-eyes-out awful effect, I might add – he is the spokesperson for the Network Christians. When he first hears of Mitch’s complaint, he flies into a rage claiming that Christmas is a peaceful time of year “for the whole world“. He rails against this politically correct ‘tolerance’ that Mitch is pushing, because after all you’re not very tolerant if you don’t allow evangelical Christian religious beliefs to be propped up by the local government. “Christians started this country!” he exclaims, ignoring the fact that many of the founding fathers were in fact deists, and further ignoring that the country was bred while seeking refuge from a state-sponsored religion. Never mind that, never mind that – how are we gonna put a stop to this guy?

It is at the moment that those words are spoken (“How are we gonna put a stop to this guy?”) that I came to realize that Dan the mayor and his comedian brother don’t seem like the good guys. It’s also kind of strange to see the government portrayed as the helpless victim of the malicious whims of the individual. But like I said previously, there’s surprisingly more depth here than first glance would lead you believe. The knee-jerk opposition of Dan and his brother are absolutely supposed to come across as reactionist, the bristling growl of a dog whose bone is being taken away. Because the nativity scene is a town tradition, the mayor is staunchly against other options which are suggested not once, but twice in the film. Those suggestions include: adding additional religious symbols to the display in order to make it more inclusive, sell the display to a private individual and let it be displayed on their private property, or do not put the scene up at all. Any of these seem like common-sense choices, but to add the symbols of other religions is to admit that other religions exist in the United States (and “98% of America” agrees with the mayor, according to Greg). The other two options mean the blood-drinking atheists win, and again that’s totally unacceptable.

But Dan’s wife gives us a title by reminding her friends that Christmas isn’t about the trappings, we shouldn’t make objects into idols (“Like Catholics,” my wife added). Christmas is about Christ and good will toward men. We should celebrate Christmas… with a Capital C! The men effectively turn this into a political campaign to stomp out Mitch’s chances of stealing the town, but it does help Dan to realize that he’s been so busy thrashing around that he’s turned into kind of a jackass. So in a way, there are two “Grinches” that need to be taught the true meaning of Christmas in this story. What a twist! Nobody ever acknowledges that Dan and Greg were essentially taking Mitch’s advice at the start of the film, to be less in-your-face with their religious beliefs, but they do remember that Mitch is a human being rather than the devil, and everything works out in a sappy ending that has the sleazy lawyer so overcome with the Christmas spirit that he drops the injunction and joins in setting up the nativity scene. What did you expect, an unhappy ending?

Yes, I’m disappointed by the way that everything was wrapped up so tidily at the end. Yes, Brad Stine is the dictionary definition of “obnoxious”. Yes, I watch Christian movies all the time looking for something hilarious from them and Christmas with a Capital C doesn’t fit that bill. But second to awful is surprisingly competent: like Fireproof, like Hidden Secrets. Most Christian films, if they’re not rapturously awful in the way that I hope for, tend to be plodding and boring. Even though this film doesn’t hold its head high throughout, the way that it makes even its antagonist more than a cipher, into something resembling an actual human being, and its protagonist flawed (even if it doesn’t admit it outright)… that makes it something special in the realm of Christian cinema. It’s not great, it’s not even all that memorable, but it’s better than boring.

Christmas with a Capital C is not awful. I’m simultaneously disappointed and pleasantly surprised.