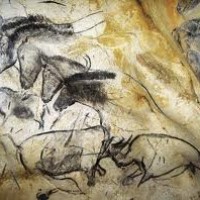 I have seen five films from director Werner Herzog now and only once was I really impressed. In general, Herzog bores me silly. His latest, Cave of Forgotten Dreams, a documentary about the Chauvet cave in southern France, where the oldest known human cave paintings were discovered in 1994, is no different. It’s like a trip to a museum: stunningly beautiful in places, but staring at the same drawings repeatedly gets old quickly.

Let me begin by repeating: the film is absolutely gorgeous, in places. It was released in 3-D – an inspired choice, as the film will necessarily fail to convey the same sense of the cave once it is transferred to a flat print for DVD. The extra dimension helps to show the depth of the field, to help bring home the expansiveness of the cave, but more importantly it is used to show the pattern of the rocks. The walls are not flat. They were not flat 32,000 years ago when these paintings of lions, rhinoceri, bison, mammoth, and horses were first drawn. The figures are drawn confidently, with long, bold lines, sometimes stretching more than six feet in length or height. We see shaded drawings to differentiate individual animals, plus other artistic choices such as the repetition of an animal’s legs to denote movement, or the open mouth of a horse to indicate its whinnying. And all this on a rock wall which curves and cracks and juts down haphazardly from the ceiling. All this in the farthest recesses of the cave, where sunlight could not possibly access, where no humans were known to have lived at all. The cave was used primiarly for these paintings, and perhaps some religious ceremonies.

Notorious for his strong opposition to 3-D in film, Roger Ebert’s review manages to praise Herzog’s choice to film in the format, however limited that praise may be. “He uses 3-D as a way for us to enter the film’s space, instead of a way for it to enter ours,” Ebert notes, as though this is a radical concept. He’s right, though, that whatever other complaints one might have about the film (and I will get into those momentarily), Herzog at least uses the third dimension marvelously. It was particularly notable during one moment where two of the scientists who have been studying the cave show us a photograph of the wall that they have taken. Because modern explorers are only allowed to remain in the cave for a short time each day, and only during a very specific few weeks of the year (in order to prevent it from being overly contaminated by outside influence), a lot of the scientific exploration of the paintings must be done using photographs. But the photos are flat – it’s impossible to get the same sense of the delirious edges of the rock wall, the incredible skill that the artists who worked there must have had. It’s one thing to say, oh, these paintings are the oldest currently known to have been made my humankind and appreciate them simply on that level. It’s another thing entirely to be able to incorporate the grand, open space and malformed canvas into the image. It brings the experience to another level entirely.

With that said, there is a review on Slate.com which asserts that “if you are a member of the human race, you must see this movie.” That’s quite a claim to make – and unfortunately, their website is down now so I can’t see how they back up that statement. Many other positive reviews will want to talk about the inquisitive nature of Herzog’s documentary style, asking questions about what it means to be human, delving into the thoughts of the artists, questioning how far we’ve come since the time the paintings were first put to stone, and so on. When an archaeologist tells the documentarian that, after visiting the cave for the first time, he began having dreams about lions, Herzog pointedly interrupts to ask if he was dreaming about paintings of lions, or about real lions. It’s an interesting question, but what does it mean?

I feel somewhat hypocritical saying this after having vigorously countered arguments like these in my review of Easy A, but I get the distinct feeling that Herzog is not as smart/clever as he thinks he is. If we’re talking about documentaries, it’s hard for me not to think of one of my favorite filmmakers, Errol Morris. His masterful film Fast, Cheap, and Out of Control takes the story of four men with vastly different careers and weaves their words together to form a beautiful tapestry of meaning, touching on subjects ranging from love, autonomy, dedication, life, death, and yes – art. The movie is freewheeling but certain, concsiously raising these issues and allowing the subject (and the viewer) to come to their own conclusions. Herzog does not manage that same feat. Though he asks question of his interview subjects, like their definition of “humanness”, he doesn’t know where to go with it. Though he’s keen enough to latch onto one of the scientists’ background as a circus performer (another form of artistic expression and entertainment), he doesn’t have a clue what to do with it. The filmmaker provides a metaphor about albino alligators, where the reptiles somehow represent our growth as a species and the greenhouse that they live in is the expansion of an industrial society…? The meaning is muddled, at best. It’s clear that the director wants to make sweeping statements, to comment on humanity and life itself. I don’t blame him for that, of course; it’s hard not to think about our role in the grand design of the cosmos when we can look at handprints on this cave wall and realize that, honestly, there’s not a lot to separate us from our ancestors except for the way that we experience life. These ideas are not handled with the same deft precision that Herzog’s 3-D camerawork manages, though.

Further, as hinted at previously, though the paintings in the cave are stellar (and the growth of the cave itself, for that matter), the magic is hard to retain when we continue to marvel over the same images repeatedly for the lenth of the film. As we get toward the end of the film, the camera spends some time focusing deeply on each individual drawing, fading to black after one and coming back into focus for the next. It’s agonizingly drawn out. With each fade-out, it seems that the movie is preparing to conclude, but then the lights come back up and it begins again. The initial viewing of the drawings was incredible, and it remains intriguing as we hear several scientific minds discussing the significance and beauty of the images on the walls, but finally the long takes of the paintings with only a mournful chorus providing sound for the moment feels like a useless recap, drawing out the movie unnecessarily rather than adding to it.

There are ways in which Cave of Forgotten Dreams is a magnificent work. Though Herzog certainly has an eye for a beautiful image and an ear for meaningful detail, he doesn’t know where to go with that detail or when to stop with the images. I don’t know that you should be considered a failure as a human being if you miss this documentary, but it is a one-of-a-kind experience even if it misses its mark in some ways. If you intend to see Cave of Forgotten Dreams, though, it must be seen in the theater and it must be seen in 3-D. If you wait until its DVD release, you will see the same movie, just as we can see the same images that these ancient artists created, but much like that cave art, even if you are seeing the same images, you will not be able to experience them in the manner that the artists had. Your experience will be necessarily divorced from that moment.