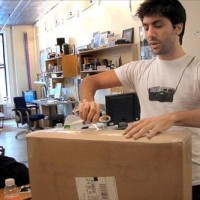 I tend to blame Ricky Gervais and the British version of ‘The Office’ for this massive push toward the faux documentary style that has become all the rage recently. You can’t turn on the television without seeing some documentary-style television comedy – whether it’s ‘The Office’, ‘Parks and Recreation’, ‘Outsourced’, ‘Modern Family’, and the list goes on. There has been a similar push in the movie theaters, but for some reason there’s a rule with the movies that you have to claim that the movie is real until you absolutely cannot anymore. Hence, The Blair Witch Project, Paranormal Activity, I’m Still Here, and yes, Catfish.

A lot of critics are reviewing the movie as though the events that happen on-screen are true-to-life. They spend a lot of their review hemming and hawing over whether certain things were fabricated, if the filmmakers told the story accurately, if it was all a hoax. I’m not going to play those games – this movie is a hoax, plain and simple. Even if real names were used, it’s a hoax, and here’s why…

A key quote used in the movie’s trailer comes from JoBlo.com and is likely the thing that will draw most viewers to the film. “The final forty minutes of the film will take you on an emotional roller coaster ride that you won’t be able to shake for days.” This quote, in addition to the Financial Times’ glowing “The best Hitchcock film Hitchcock never directed” flash over creepy images and haunting music in the trailer. Our protagonist Nev looks into a darkened barn, we see a haunting and blurry image on Google Maps. This is going to be a chilling movie!

Of course, the point of the movie is about not necessarily trusting what you hear. In a startlingly transparent move, the film has one of the characters deliver a monologue describing the meaning of the title, like a cheap sitcom trying to shoe-horn in an emotional core at the last second. Cod, the character says, are kept in tanks with catfish – the catfish nip at the cod’s fins, keeping them sharp, alert… keeping them on their toes, so to speak. The clear idea that the movie is trying to sell at this point is that although the actions from the “Facebook family” that protagonist Nev was following were not all entirely truthful (do you really think I’m spoiling anything by saying that?), the untruth is maybe defensible by the fact that it makes everybody involved more vigilant. Or something. Really though, the description of the catfish is meant for the viewer. The movie is nipping at your fins, viewer, so what are you going to do about it?

In an interview with Moviefone, the film’s creators talk about the fact that lovable goofus Zach Galifianakis refuses to believe that the movie depicts actual events. “That makes Henry and I the two best screenwriters in Hollywood, and Nev is the best actor since Marlon Brando,” they humbly respond. Actually, it doesn’t. The script of the film is nothing special – I already mentioned the title-explanation which has been awkwardly thrown into the film. What makes the movie work, when it does, is the darkness and the sense of dread that accompanies their fateful trip to Ishpeming, MI, to find out what’s really going on. The movie over-stays its welcome once the ‘truth’ is revealed, but without the benefit of driving the story any further. Nev indeed has some moments of particularly strong acting (the scene where he is reading intimate text messages to his buddies is great), but overall his role is limited to fake smiles and feigned shock.

I guess what the positive reviews are finding in this movie is some sort of psychological profile – both of Nev and of the sort of person who leads another person down a rabbit-hole like this. I understand that the movie is trying to lead its viewers toward that, but I don’t believe that it succeeds. No bigger picture is offered. You can feel during the [scenes with a white background and rocking chair] that a larger idea is intended, that this is supposed to be the true climactic moment, but it fizzles and sputters out without any excitement. It cannot draw interest because the characters are not real. Nev is the main character because the camera is on him, that’s it.

Catfish is not a good movie, is what I’m getting at. It’s a fake documentary pretending it’s real because it’s got nothing else going for it. It’s a hoax, in that it has a misleading marketing campaign that makes potential viewers think that they’re going to see something disturbing, when really it’s mostly just boring. The trailer almost has more to offer than the finished film. Seriously.