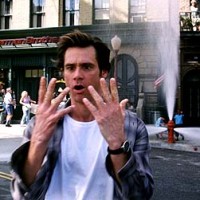 It’s hard to read Bruce Almighty, the light comedy where Jim Carrey is bestowed with the powers of God (Morgan Freeman) for a weekend. Maybe reading into the film is not what was intended here, because although the concept of a man being given the supernatural powers of a deity could make for some heady philosophical quandaries, the movie is mostly content to making a dog sit on a toilet and read a newspaper like a real boy. Still, I’m going to take the road less traveled here. It’s clear what the film intends to say about slapstick, computer-generated comedy: “S’good.” But though the movie tries to steer clear of anything too serious, it’s hard not to step on some toes when you make a movie which involves a major religious character. Does the movie’s theology match any particular sect, does it cobble things together into its own comprehensible vision, or is it a loose and unsteady blasphemer’s joyland?

Perhaps we should step back for a moment and look at the facts. Bruce (Carrey) is down in the dumps because the lead anchor spot at the local news station he works for has been given to another reporter. Quite rightfully, I might add, as Bruce’s suggestion for a sweeps week story involves a bakery’s attempt at making the city’s largest cookie, where his rival pulled out a story on that sweeps standby: some kind of sex scandal. His girlfriend Grace (Jennifer Aniston) likes looking at old photographs of the two of them together, which is totally boring. His dog is not yet trained on where to use the restroom. And to top it all off, Bruce’s apartment is thoroughly mediocre. In frustration, Bruce calls upon God to explain why he has been blessed with such a mundane and comfortable life. To this, God responds, “If you think it’s so easy, see if you can do any better.” It sounds a lot less petty when Morgan Freeman says it.

The God of Bruce Almighty is a kind trickster, pretending to be a janitor one moment and altering reality so that Bruce has nine fingers one hand the next. I tend to think that the typical American version of God would not hand over the reins to an upper middle-class Jim Carrey with vague symptoms of depression in order to teach him a lesson about life, largely because he’d end up giving everybody a weekend of unlimited power if those are the only requirements, but let’s roll with this. Bruce is thus given hilariously visual, astonishingly basic superpowers. He walks on water, makes fire hydrants explode with a flick of his wrist, has a lady’s dress blow up in the air Marilyn Monroe style. These tricks make him look more like a magician than a temporary omnipresent, omniscient, omnibenevolent deity. Bruce is bizarrely short on omniscience, save for when he opens his email and finds hundreds of thousands of unanswered prayers, or when the voices of praying individuals scream over one another in his mind, but only when it’s funny a la Roger Rabbit. Our protagonist decides to reply “Yes” to all prayers, although I don’t remember that wreaking any havoc in the film. What he really ought to have done is what the real God would have in the same situation: move them all to the trash.

Omnipresence isn’t brought up at all here, so it seems that the movie’s idea of God is a lot more concrete. God is a man: God is Morgan Freeman. Case closed. None of this trinity nonsense – Jesus isn’t mentioned once in the film, nor is the idea that God is everywhere at once. Omnibenevolence is necessarily thrown out the window too, because what fun would it be if Jim Carrey weren’t allowed to be a jerk to everybody that he meets because he’s got super-powers. In possibly the most famous scene in the otherwise forgotten film, Bruce makes his nemesis Evan (Steve Carrell, in a star-making role) speak in tongues on live television, thereby making him look like a raving lunatic.

Alright, so Bruce is a pale imitation of God. Perhaps that’s by design – INTELLIGENT DESIGN! After all, God does note later on that although he’s had the ability to change the position of the moon, killing thousands of people in Asia (who cares!) and throwing the Earth out of orbit, Bruce’s abilities were primarily limited to his hometown because of the fear that our hero’s head would explode if he had to deal with an entire planet’s various miseries. So then let’s take a different tack here, what exactly is it that God is trying to teach Bruce by giving him limited supernatural ability for a couple of days? The answer varies, which you could say is a sign of God’s capricious nature, or you could go the overcome-with-awe route and claim that it’s open to interpretation. In the one, God – like Batman – is determined to maintain Bruce’s loyalty. Once our boy sees how tough ol’ God has it, he’ll lay off a little bit and be more appreciative of the blessings he do have. Ideally, he’ll issue an apology to the Creator of the Universe for ever questioning His Divine Wisdom and become a monk. In another interpretation, God is showing Bruce how fickle life is and how difficult it is to contain – like Ian Malcolm –  and requesting that he take it upon himself to change his own life. You didn’t get the job you wanted? Well, work harder and stop acting like Jim Carrey. Again, good advice for Bruce but rather pathetic to hear from the lips of God that the work is so hard that he needs you to pick up the slack for him.

What was that fourth omni- again? Oh yeah, omnipotence. So just to make sure we’re on the same page here, God has the power to do literally anything (including affect free will, he just chooses not to). He grants a failed television reporter divine powers in order to either demand respect or to teach him to do things on his own. Either way, doesn’t it seem as though there are more important places that God could be pretending to be a janitor? And in the end, it may all be a sentimental message about accepting things the way that they are. Wait, what? You’ve lost me again.

All of which is to say that Bruce Almighty – like the book that inspired it – is ridiculous, confusing, and only occasionally funny.