‘Bridesmaids’ and the Essential Conversation After 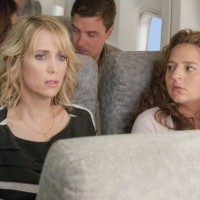 I have just come back home from picking up dinner and am looking over the monitor to read over my work. My wife Roo comes downstairs.

“Hey, babe,” I say. “Your food’s right behind you on the couch there.”

“Oh. What are you writing?”

“A review for Bridesmaids. I liked it better than Josh, so…” I shrug. “He gave it two stars. I think it deserves more than that, like three or three and a half.”

Her eyes grow wider. “That’s all?” she replies in exclaimed disbelief. Slightly taken aback, I proceed to explain my reasoning for the decision.

“Well, yeah, I mean, it was a good, funny movie. It was far from perfect, but I think Josh was too harsh on it. He saw it with a really bad crowd at an advance screening like a month ago. It might have affected his opinion… Okay, so it was, like, nothing but sorority girls that ‘Awwed’ at the cute stuff – things like that. This crowd apparently rolled in the freakin’ aisles over that gate bit at the beginning!” I say, making a “duh!” face.

Roo is clearly getting passionate about the topic at hand, showing signs of annoyance. “Because that part was funny,” she remarks.

Right about now, I start to wonder if we’re exactly seeing eye to eye. “I thought it was amusing,” I start to nitpick, “but all she did was just sit there riding the door, avoiding the occasional tree branch. What’s to buckle over in hysterical laughter over? It’s not like the thing was giving her an orgasm or anything.”

Now Roo is mad but doing her best to control herself. She sits on the love seat, silently eating her black bean soup. I go on proclaiming every way I can to express how my opinion differs from the critics who loved the film and from those who slammed it.

“I really did think it was a smart and layered plot – that on the surface, it’s Annie vs. Helen. But even deeper within, it’s a story about how Annie is inevitably going to lose her best friend.” I continue, “That I liked. And I liked Melissa McCarthy (as Megan) more than I thought I would, but I hated the fat jokes. I thought they were groan-worthy, like when she ran to the restaurant after its excellence had been verbally built up while the others walked. That seemed unnecessary…”

Still no reaction from Roo…

I go on: “That, and Helen’s step-kids telling her off. That didn’t seem necessary either. I’m supposed to believe that she can’t handle her foul-mouthed kids, but the wedding’s no problem?”

Roo stays quiet, still brewing on the inside.

“In fact,” I ponder aloud, “I think both Wiig and the lady that played Helen, uh, Rose Byrne did a better job than McCarthy did, y’know? They were so committed to it. So much more realistic…”

I can’t ignore it any further… “Is something wrong? You look upset.”

The dam has been cracked.

“No, not upset. I just disagree… I think that you obviously don’t get it.”

The crack grows. “I just can’t believe you’re going to sit there and say that this movie is only worth three stars. Out of five, right?”

I nod, only slightly less sure of my choice than before.

“Only three stars when I know you’ve given movies with the exact same sort of humor – only with men – far better ratings. Would you give… Anchorman or Old School a lower rating because of its offensive humor?” she asks.

Suddenly discovering myself on the hot seat, I say, “Well, Old School‘s not that great.” Right now I’m thinking, … even though you own it on DVD, Chris? “In fact,” I continue, “neither one of them is a particularly well-made film… But you know full well that Anchorman is a personal favorite of mine.” And now I’m thinking, Why, oh why, did I have to buy that ridiculous film’s poster and frame it?

“Right!” she says. “Would you give Anchorman only three or three and a half stars? Even though it continually makes fun of a mentally handicapped person in it?”

“Well,… yeah!” I reply. “They’re two different types of comedy. Everyone in Anchorman is an idiot, a complete clown, and the script’s fully aware of it. Sometimes I’m really fond of the absolute silly! One of my favorite films of all time is The Naked Gun!”

“So,” Roo establishes, “a movie that – for the most part – passes the Bechdel Test happens to have a fat joke in it, and it’s too much of a crime to give it a good rating. But a mentally handicapped character can shout ‘I love lamp!’ and it’s the funniest thing in the world?”

The reference to the Bechdel Test was a good clue to her primary point, but I’m too flustered to pick up on it. I firmly state, “It wasn’t just the fat jokes, Roo. I also found it unbalanced that the other two bridesmaids” (referring to Ellie Kemper’s Becca and Wendi McLendon-Covey’s Rita) “weren’t as significant or as funny as Megan was. That, along with other stuff…

“I’m not going to give Bridesmaids a perfect five star rating, Roo.”

The dam bursts. “I’m not saying you should give it five stars!” she debates. “I’m saying this movie wasn’t for you and that you obviously don’t get it!”

“What do you mean it wasn’t ‘for’ me?” I infer. “It’s an Apatow comedy! I’ve worked in the world of comedy – different areas of it. I’ve followed the career of Kristen Wiig. And I know they’re plugging this film as ‘not a chick flick’. I think it’s clearly targeted more toward women, but I’m going to go with how the film’s creators wish for the set-up to be. I ask again: What is it I don’t get?”

She stops me: “But have you ever taken it?”

… I am now starting to get the picture. “Ahh… No,” I answer, “I have not actually experienced my own ‘walk of shame.'”

“That’s part of why you don’t get it,” she underlines.

I want more clarity on her personal view, so I inform her, “Every time you say that I don’t get it, I feel like you’re calling me stupid or unqualified to write my opinion of the film.”

“I’m not saying you’re stupid, Chris, but you are sort of unqualified because you’re not seeing the movie the same way women are seeing the movie. And I don’t blame you – I don’t. You get movies to your liking all the time because Hollywood is still a very masculine-driven business. But I get maybe one movie per year that is more for my gender and is intelligently written and made. Sometimes not even that!”

I sit in silence for a bit while I refreshingly feel the wheels in my skull turning again. The film suddenly makes so much more sense. Parts like why it would open with an irregularly humiliating instance that only women could completely relate to. Or why the groom of the wedding (played by Tim Heidecker of “Tim and Eric Awesome Show, Great Job!” fame) has no lines and is basically the chief extra in this film about the maid of honor – he plays no important role in her story. Or why the film is as formulaic as it is – in this man’s world, I imagine you would have to dumb things down a bit in order for everyone in the audience to possibly relate, or even just to be heard out by the major studios. Just to get the movie made. Just to get a foot in the door.

Then I tell her. “Wow… You’re right. You’re absolutely right.”

Roo begins to look relieved that I’m now comprehending. “I mean,” she says, “didn’t you give The Hangover something like four and a half? Five stars?”

I let out a snicker. “Yeah, I was way too kind to that movie. At least Bridesmaids wasn’t so desperate for a laugh that it had to utter the derogatory anti-gay ‘F’ word.”

Roo nods. “Yeah! And please know, Chris, that I’m not saying this film was perfect. It’s not. I think they tried to fit too much into the plot, but I understand why they did it – they wanted the statements present. And yes, there were really only four fully fleshed out characters: Annie, Lillian, the cop, and Megan. Everyone else was like a one-dimensional ‘Saturday Night Live‘ skit.”

Picking up from there, I say, “And Helen is straddling the line between the two! That’s why we have the scene of her step-kids disrespecting her while she waves them off like they’re angels. It’s an attempt to foreshadow how Helen – just like Annie – has her own imperfections in her life that she needs to sort out.”

We both smile, relieved to be on the same page. “I think you just helped this film get a better review,” I say.

“Don’t change your review completely because I told you to or anything,” she cautions.

“I’m not,” I happily tell her. “I’m changing it because you’ve opened my eyes to the truth.”

2 Responses to “‘Bridesmaids’ and the Essential Conversation After”