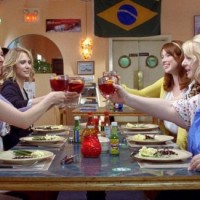 The films of Judd Apatow and those inspired by him have gotten a lot of attention, both positive and negative, for being in a genre which has been lovingly termed “bromance”. That is, they are often about a pair of men who have a strong relationship, a deep and honest friendship which borders on the romantic. Do you get it? ‘Cause it’s like the word bro and the word romance, put together – combining them into one word. It’s incredible, but the realistic portrayal of masculine relationships as ones which actually involve people who care about one another has been seen as a shocking new development in the world of film. Hoping to capitalize off of this success by turning the formula on its head, director Paul Feig brings us a movie in the same vein, only this time with – get this – girls!

Unfortunately, he forgot that the movie was also a comedy. Or rather, someone neglected to inform him that saying that a character’s name is “Bill Cozby” is not comedy. And much to the chagrin of the established order, comedy is also not: old people speaking frankly about sex, children swearing, or a woman sitting on a fence as it opens. The 200 college girls that I saw this movie with would disagree with me on all of those points, especially the last; a scene early in the film has star Kristen Wiig climbing over a fence which opens while she is straddling it – the moment had the audience rolling in the aisles.

So, in the interest of full disclosure, my annoyance with the film itself may have combined somewhat with my disdain for the audience, as their tendency to laugh uproariously as anything even joke-like had the unfortunate effect of making the stabs at humor within the film feel only less funny. It would be unfair to say that the audience was solely responsible for making Bridesmaids a chore to get through, though. The movie itself pitched in, too.

The concept of the film is sound. Annie (Wiig) and Lillian (Maya Rudolph) have been friends for as long as they can remember, best friends even. They live five minutes away from one another, close enough that they can easily get together to have lunch whenever they like. But now Lillian has gotten engaged and the wedding planning is in high gear. This alienates Annie already, the knowledge that her relationship with her best friend is sure to be changing in a dramatic way very soon. Adding to this is the fact that she must now help design the perfect lead-in to the wedding (buying dresses, bachelorette party, wedding shower, etc.) as the maid of honor… all while in competition with Lillian’s new friend Helen (Rose Byrne), who has the looks, money, and resources to outdo everything that Annie may attempt to.

This, on its own, is an idea I can get behind. An in truth, there are some funny moments that arise from this scenario. At the engagement party, Annie and Helen spar over who will get the last word in at the toast in a scene that goes on too long and therefore feels just right. Helen’s inexplicable connections get increasingly outlandish, as well, culminating in an extravagant wedding shower which includes party favors which keep the party going well after the guests have left for the evening. These moments work well within the construct of the plot, they flow naturally from the struggle between the two friends of Lillian.

Most of the film, however, is rushing to tick off scenes from the trailer. I guess I can call it a problem of “pacing”, but there’s nothing to tie things together, except that, well, this is where they go next. Perhaps this can be better illustrated in the subplot about Annie’s involvement with a lovable, good-natured police officer with a dreamy foreign accent. Awwwwww. No, I’m serious, that was the sound in the theater: “Awwwwww.” From 200 college girls. In true romantic comedy fashion, they meet cute, get together a few times with great results for both, then break up for no particularly compelling reason, and yet by the end of the movie, they… well, I don’t want to ruin it for you. My point is that these plot points are so well worn that we could follow along with our eyes closed, and despite the vocal shock that the audience elicited when the relationship briefly ended, it was less of a surprise than an inevitability. Turning back to the wedding party, we go through scene after scene because this is the way it must be. It moves in a clunky manner, like a projector switching slides, but sometimes scenes seem to have a pointless bit of improv tacked to the end for no particular reason (take a moment where Megan, a.k.a. the fat one hahahahahahaha, clumsily vaults a couch prior to the end of a scene).

Again, I don’t mean to say that there weren’t a few times when I laughed, but too often the jokes were groaners. There’s an extended sequence where Megan attempts to seduce a single man on an airplane, and it’s funny because she’s being too direct and because she’s fat hahahahahaha! Another woman is told to put a bag of frozen peas on an infection and she spills peas all over the ground – because their ideas about the meaning of the directive were not the same! Annie repeatedly refers to a man named Steve as “Stove”, because she’s changing the long vowel in his name to a different letter!

When the movie really works is when it commits itself to the relationships between the characters, i.e. when it embraces its roots as a girls’ bromance. My favorite scene is one where Megan confronts Annie about her self-defeatism. It’s a tender moment where the two women talk seriously with one another. There are jokes during the scene, sure, but a lot of it is the two actresses looking directly at one another, the characters speaking candidly about their feelings and thoughts. This is something that comes far too seldom in Bridesmaids, as even the scenes with Annie and Lillian together often don’t manage to capture the same depth. It’s too easy to go to the well of shouted anger or tearful apologies without maintaining the deeper sense of connection between the cast. Though the overall subplot is wretched, the playful conversations between Annie and her cop boyfriend are engaging because they’re serious, yet light and fun. They have their own inside jokes, they laugh with one another. The humor here is not the broad, over-played “dangers of ruining an expensive wedding dress” type of stuff from the rest of the film. That’s what makes these scenes special.

After leaving the theater, my wife’s response to Bridesmaids was, “I didn’t hate it, but I didn’t like it.” That’s more or less the same way that I feel. Despite the urge I felt to hate the film simply because of the group-think guffawing of those in attendance, there were some genuinely enjoyable moments. They were sparse, but they were there.