Boys of Bonneville: Racing on a Ribbon of Salt 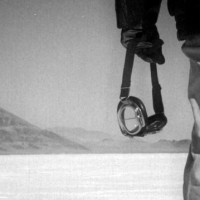 Boys of Bonneville: Racing on a Ribbon of Salt

ONCE upon a time, there was a “man of steel” who sought thrills but demanded safety. He was a devoted Mormon Christian, and an even more devoted race car driver. But this man didn’t race other men, at least not for long. He raced against something inhuman, something beyond the realm of the living: he raced against time itself. This man was named Ab Jenkins, and to hear the people who talk about him in this film, he was a living god. Celebrity motor enthusiast Jay Leno compares Jenkins to ‘Babe’ Ruth, in that both are what he deems to be true athletes. Indeed, because of Jenkins’ – ahem – drive to be the best, 49 land-speed records still stand, all of which he set at the turn of the twentieth century.

The film itself is largely a chronological biographical documentary. It begins when Jenkins was just getting started, and ends in present day as his children commemorate the man’s life. Although most of the people in the film talk about the man with an odd familiarity, as though they’ve each known him their whole lives. They use his first name, Ab. Ab loved speed, but the reasons for that are difficult to explain. When you’re out there driving, taking your vehicle and your body to their limits, you become an individual. It was from this love of speed that Ab got it in his head to test how fast he could go on the vast salt flats of Utah. Maps of the time listed the area as “Salt Desert – Impassable”, but Ab had other ideas. He clocked himself out on the flats, easily beating multiple records on his first run. But Ab wasn’t content to simply be the best and leave it at that, he wanted a challenge. Soon, the gentlemen racers of Europe were trekking to the States to get a piece of that sodium-rich action.

This is all interesting, if a little – ahem – flat. That is to say, the documentary plays out largely as a biopic of an unusual man who would otherwise be forgotten to history except by a few connoisseurs of the sport who still raise a glass. What it fails to do is make a case for why Ab deserves to be remembered. That sounds awfully heartless of me, but what I mean is that if the film hopes to play to a general audience, being a record-breaking speed racer isn’t really enough of a selling point. What is the meaning of the racing? How does this affect his family, were the dangers involved in the sport? Where is the drama? Boys of Bonneville tells the story of Ab’s life so thoroughly that it includes the fact that, while looking at a tractor, Ab’s last words were: “I drove one of those at the Salt flats.” I took that line directly from the documentary, but a little online research to make sure it was really something Ab said provides the much cooler: “I took a wild ride in one of those things.” Although, then again, he’s still talking about a tractor. The reason I bring this up is that the knowledge of these last words provides no insight, except maybe for the fact that the Salt was his home.

Which is not to discount the life of Ab Jenkins, mind you. This is a man who, at nearly sixty years old, got caught in a vehicular fire and yet still went out and raced again. This is a man who drove in circles for 24 straight hours without so much as a bathroom break, battling the intense heat, thirst, and pitch-black darkness of the desert at night. This is a man who would lose control of his car for a second and start skidding at eighty miles an hour or more, but right his course before a violent crash. And truthfully, there are some incredible things about the way that the film was constructed. A lot of the film is narrated (by Patrick Dempsey, apparently!) from Ab’s private diaries, in the first-person. This is a bold choice which makes the action seem that much more real by giving the illusion that the man is really talking to the audience about his experiences right here and now. There’s an amazing sequence from the driver’s point of view as Ab in narration describes the experience of speeding through the desert at night, the lights positioned every quarter mile speeding by so quickly that they begin to slope upward and you feel like you’re in a valley. On the screen, the image takes the shape described; I can only imagine what it would have been like to see in 3-D. Speaking of which, toward the end of the film we see multiple matted images which create a 3-D effect on a two dimensional background, the effect being one of movement and power. This, this is a three-dimensional man standing in a two-dimensional world.

But I keep coming back to the question: what’s the point? We also meet Marv Jenkins, Ab’s son, and the plurality of the title begins to make a little more sense. He loves his father and thinks back fondly on memories the two shared together, and Marv seeks to rebuild his father’s most famous vehicle, the Mormon Meteor III, in tribute. Is that what the movie is: a tribute? Am I wrong to seek themes, to look for ideas that the filmmakers are trying to get across? There’s an indication that Ab was unusual in the celebrity status he attained because he did his deeds for “the right reasons”, i.e. he was not in the game for the fame but for the challenge. Another claim is that his work was done “for this country”, although it seems like kind of a stretch to call salt racing especially patriotic. More believable is the simple idea that Ab’s tireless work was an image of the achievement that unceasing endurance can reach.

Are we to position ourselves in such a manner to best Ab Jenkins – not on the Salt flat, necessarily, but in our respective fields? Or are we simply to marvel at the commitment that he exerted in his own life? It seems that the answer lies closer to the latter. There’s certainly nothing wrong with that – a scene where Marv holds a photograph of his father and says simply “This is my dad” is one of the most emotionally charged of the entire film. But this still feels somewhat limited in scope; a comprehensive picture of one man’s life, yes, but with little real sense of how that man’s deeds affected those and the world around him.