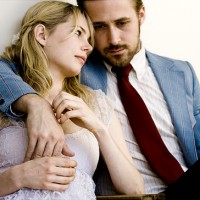 Well, I don’t hate him. “Hate” is a pretty strong word, and I’m sure he’s a likable guy deep down. What he also is, though, is a terrible actor. I’ve been repulsed by him as an actor ever since seeing his gag-worthy performance in The Notebook (a film which has grown in my mind to become a legend of bad movies). His turns in the pathetic thriller Fracture and grating independent Half Nelson did his reputation no favors in my eyes, although most everybody else in the world seems to feel that his flat performances are somehow the stuff movie stars are made of. I keep returning to Gosling’s films with the hope that someday he will actually emerge with some shred of talent after all, but the most he can muster is to merely meet expectations. He does not have the capacity for making his characters interesting in the least.

This trait, disastrous at most other times, is actually useful in Blue Valentine. Gosling plays Dean, a man whose life changes dramatically in a few short years. As a kid just out of high school, he is spontaneous and alive – he plays the ukelele, dances, has no compunctions about having sex right on the streets of New York City. After a few years, though, Dean is a shell of the man he once was. He’s content to sit around at home, playing with his young daughter without any motivation toward, well, anything. With Gosling, there are basically two types of acting he has the ability to pull off: goofy grinning, or broad, explosive yelling. There’s nothing in between for him, and luckily the movie doesn’t require much more from him. As a kid, he gets by on his goofy grins to make the audience believe that Cindy (Michelle Williams) could fall for him; as an adult, his goofy grins belie a larger issue.

The heavy lifting is done by Williams. Dean effortlessly floats into the picture, but it’s Cindy who leaves her current boyfriend for this strange drifter. It’s she who has an unplanned pregnancy and must face the consequences while knowing that there’s nothing to keep Dean around. It’s she who must work at odd hours and face sexual harassment while her husband blissfully makes other plans. Gosling is good for a voices-raised-fists-shaking argument, but when it comes to the smaller moments of domestic discord, you’ve got to look to Williams. In what is almost the climax of the film (though it comes early on, Memento-style), the couple visit a seedy and uncomfortable motel in order to forget about the troubles weighing on their shoulders. Cindy’s state of mind here varies wildly: she starts out annoyed, eventually resigned to try to make the most of a bad situation, and later her temper drives her to the very brink of desolation.

Yes, this is a movie about a married couple who are falling out of love. It’s also the story of them falling in love. The film tells both stories simultaneously, cutting seamlessly between the two threads of plot in order to force the viewer into considering the lessons that can be learned from the couple’s story. Is it that people change, that the person you thought you loved might not be the same after some years have passed? There’s a question that arises, as my fellow critic Caleb Chadwick keenly observed: “But where is the middle to all this? Where did it all begin, the point of breaking?” We see the characters falling for each other, then failing each other. What we don’t see is how they go from reveling in one another’s eccentricities to being revolted by them. Chadwick would like to believe that the idea is for the viewer to draw their own conclusions, to write their own internal story of what happened in the years separating the two plot-lines, but I imagine the truth is much bleaker. It’s a simple matter of things not living up to the expectations you had.

There was a kerfuffle in the weeks before Blue Valentine was released in theaters. The MPAA had gotten around to rating the film and had slapped it with an NC-17, a rating usually reserved for films that are extremely perverse in some graphic manner. Conventional wisdom stated that the issue at hand was with regard to a scene that included Dean performing oral sex on his wife. The producers succesfully lobbied the board to get the rating downgraded to a simple R, but the media attention piqued the interest of many who wondered exactly what sort of hardcore sex scene this movie was peddling to almost be saddled with the dreaded NC-17 rating. To be honest, the scene in question is nothing worse than we’ve seen in a lot of other movies; certainly nothing more offensive than any given scene in American Pie. I mention this not because every critic is required by law to make reference to the incident in his or her review of the film, but because of how well it parallels with the point I’m trying to make here. The NC-17 scene was much less of a “thing” than it had been made out to be; I went in expecting the pornographic, but ended up getting something boring and static (that’s the best I can do for a pun, I’m sorry). In a similar fashion, these two characters enter into this relationship expecting something more. Dean flat-out says that he is not interested in marriage, but he finds himself with a ring on his finger regardless because he has become convinced that there’s a reason.

If I were to try to diagnose the relationship ills that affect Dean and Cindy in this movie, my instinct would be to place the blame on the fact that the two do not seem to communicate effectively. While there is a despairing undercurrent to the film, pushed along by Williams’ more nuanced performance (only slightly more) and, yes, the out-sized spats that the lovers have in public, I think the movie as a whole would have benefited from a better sense of communication. The characters don’t articulate their thoughts or desires, even to themselves. Maybe they don’t even know what they desire. They weren’t expecting anything specific, just something other than what they’ve got. But the chance for more emotional resonance is lost when everybody stays so silent: as we reach the inevitable conclusion of both plots, it’s hard to feel that anything has been explored that wasn’t apparent from the start.

As a slice-of-life drama, Blue Valentine could use more life. Or more slice. Just something other than what it’s got.