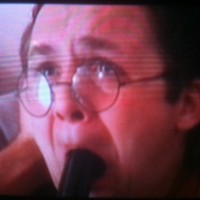 The extreme low-budget thriller Blocked, the first and – as of this writing – only feature film from director James E. Roberts (who also co-stars), would be difficult to bear if it weren’t for the self-referential style that the film takes on at times: complete with on-screen graphics, occasionally disorienting sound design that often utilizes overlapping voices, and sometimes scratchy film stock which worms its way into the action. It reminded me of Fight Club, if that movie were made for public access television. I wanted to like the movie, to be able to look past the limits of the budget. And I do think that I would have been able to look past the awful lighting, the ever-changing sound quality, and some of the bad acting… but it was all in support of a story which is intentionally convoluted and ultimately unsatisfying.

The movie’s star is Matthew Godfrey, who plays a screenwriter named Samuel. When I said previously that I could look over some of the bad acting, Godfrey is the exception. This is especially deleterious for the film as the whiny, stammering, glasses-losing, bland Samuel is at the center of practically every scene. Our protagonist has his home invaded by an actor named Joker who may actually be a bank robber, a murderer, a runner, or, um, an actor. Joker in turn brings over a group of his friends to crash at the screenwriter’s place, yet Samuel remains the least interesting of the entire group. When a naked man appears on the balcony one morning demanding a glass of soda, the most that Sam can muster is, “Well… then… okay.”

I suppose there’s an argument to be made that the character, and Godfrey’s portrayal of him, is done intentionally: after all, Samuel is suffering from a severe case of the writer’s block. Perhaps his inability to say a single sentence without stumbling over every word is indicative of his condition. However, when Joker and his posse enter into Sam’s life, things become exponentially more tense and dangerous – a situation which helps our man Sam power through the bump in his creativity. After being given the profound advice to “write what you know”, Samuel is shown up all night typing away at his laptop. I guess even though he is concerned about being framed for a rape and murder, it’s more important to get the first draft written. And Sam does become less passive as the movie goes on, but not in any reasonable ways. In fact, he seems somewhat bipolar: he will rear back into attack mode when he feels threatened, then simply crumple up in the corner crying when anybody calls his bluff… which they always do.

The plot folds around and around in bizarre ways that, in the end, don’t mean anything. Joker has a friend named Macy (played by the director himself), a seemingly hardened criminal who ends up in Samuel’s apartment and likes to wave a gun around. The three principle antagonists – Joker, Macy, and their shared girlfriend Kate – again seem to be involved in something extremely important, perhaps some masterfully planned caper involving the heist of jewels, complete with double- and/or triple-crosses? Probably not. The extent of their power to be menacing comes in the fact that they refuse to leave Sam’s apartment, and that they all have guns. Nobody ever fires a shot, though, because when they do it becomes clear that they’re holding toy guns which cannot fire real bullets. Not to get into the finer points of the plot too much here, but the FBI gets involved in the situation and are equally vague as to what the situation is, telling Samuel only that he should “stay out of it” in order to remain safe, and calling to remind him that they could frame him for a rape and murder if he doesn’t follow their orders. Threats to which Sam, as usual, is all too eager to accept without question.

Though the acting is at times laughable, the most irritating thing about Blocked is the fact that it tries to be clever by calling its protagonist a screenwriter. Yet the movie proceeds to have a weak, baffling, unhinged story, plus terrible dialogue. Again, the film tries to have it both ways by making subtle admissions to its own lack of worth. The screenwriter within the screenplay is a failure, having never gotten anything produced which he had written. As his screenplay moves forward, it is criticized for not understanding the characters’ motivations and for badly faked accents (how that comes across in a screenplay, I do not know). At one point, a character says straight up that there is no point continuing, that the movie is awful. Ho-ho! Well well, James E. Roberts, your movie’s self-deprecation is adorably endearing. Of course there are a great number of films which know that they are bad and embrace that, blurring the lines between manufactured failure and organic. Some of them are high-profile titles such as Snakes on a Plane, Machete, and Fracture. Roberts’ film reminds me of a lesser-known title, though: Stupid Teenagers Must Die. The title alone is tongue-in-cheek, a commentary on the cliches of the horror genre that usually involve the slaughter of horny teens. Yet the movie itself is mostly straight-forward, a conventional (though hideously cheap) horror flick. Can you really claim to take the high road of satire, then pull the same punches as what you’re claiming to be lampooning… without any layers on top of it?

In a similar way, Blocked is about a man who can’t write a good screenplay, and at the same time it also does not have a good screenplay. If we start imagining that the lack in the true movie is some kind of meta-commentary on the filmmaking process as a whole, where do we draw the line? By making jabs of self-reference, the movie is essentially immunizing itself against negative criticsm on the basis that its story sucks. “But don’t you see? That was the point!” I don’t buy it. There isn’t any layering at all. The movie literally tells us the definition of a plot twist, then gets down to the business of providing a plot twist. Nothing that arises does so in a way that it seems to be naturally flowing from the previous scenes, mind you, in the way that a plot twist ought to (e.g. you can go back to the gold-standard of plot twists, The Sixth Sense, and see how the twist holds true to the action prior). Instead, it says “this is the part of the movie where a plot twist happens” and then makes one happen. So there is a way to wink at the audience while still playing your cards strategically. But Blocked is so focused on organizing its hand that it ignores the art of the play.