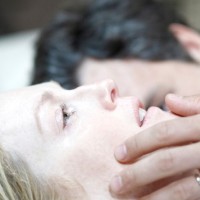 I just got finished reading Jose Saramago’s Blindness, the book that director Fernando Meirelles’ movie Blindness was adapted from. In fact, I just finished reading two of the author’s novels in a row, so I guess you could say that I’ve been on kind of a Saramago kick. I guess this probably isn’t an original thought, but it’s much easier to go easier when reviewing a film when you’ve read the book the movie was based on. For me, despite knowing that it was a worthless film, I couldn’t help but give the benefit of the doubt to the silver-screen adaptation of Love in the Time of Cholera, because I was so familiar with and so enamored with the original work. Similarly, this tendency toward forgiving missteps led me very recently to tentatively recommend the film version of Atlas Shrugged because, hey, at least it gets the ideas right. So it is with Blindness, that I can see why it has gotten mostly poor reviews, but for the person who just finished reading the book, it works.

Not to say that it works well. The movie, like the book, tells the tale of a country which slowly begins being infected with a blindness unlike any other, where people see a milky whiteness instead of the usual darkness. The government, at a loss for what to do, decides to keep the infected in a maximum security mental institution, where they are delivered food once every, oh, once in a while. There is no further oversight of the facility, aside from guards positioned outside to mow down any of the quarantined should they try to escape. Aside from that, though, the hospital functions as its own country for the blind. Over time, as more infected arrive, there is not enough food for everybody (not even taking into account those who take more than their share because they know that nobody else can see). The place becomes more crowded. The water is rancid, and the prisoners – knowing that their actions will go unreported – turn to relieving themselves in the hallways, dropping garbage wherever it falls. It’s a slow process, but the movie shows it in a quick montage.

The terror of the situation is never properly sold, even when  one of the blind inmates (Gael Garcia Bernal) declares himself King because he has a pistol. He subsequently steals the food, subjecting his fellow prisoners – especially the women – to the depths of his depravity in exchange for a bite or two from his stash of meals. But the movie doesn’t show the characters wasting away from starvation, it doesn’t show their feet caked in mud and blood and fecal matter. When the self-proclaimed King takes the women to sexually abuse them, it’s horrible, but not horrific in the way that it was in the book. The characters say their lines just as they did on the page – aside from a few scenes near the end that were cut out and some that were combined, the movie is fairly faithful to the source material. But saying the lines isn’t enough to give them weight. Talking about being exhausted isn’t the same as showing that exhaustion, and though we hear about how bad things have gotten it doesn’t come across as forcefully as it should have.

Meirelles tries to compensate by gussying up the picture with technical flourishes. The camera focuses deeply on a white tile floor, zooming out slowly until the viewer finally understands that we are not looking through the eyes of one of the blind. Many images are shot through glass or mirrors or in partial light to make the images more difficult to make out. There were several times where the character speaking on-screen was partially obscured for no particular reason. When a doctor who has gone blind (Mark Ruffalo) talks to two men who have been fighting, the camera focuses on the doctor but the top of the frame ends at the physician’s chin. Later, when the doctor’s wife (Julianne Moore) speaks with an injured man at night, the camera only shows half of the injured man’s face while he speaks. Anybody with the slightest eye for composition would feel compelled to place the actor in the shot completely, but this was clearly a conscious choice. Not to make the viewer feel blind, as one might imagine, but more to frustrate the viewing experience. It’s little choices such as these which, if you are not watching for, might slip by unnoticed. In one marvelous moment, a blind boys walks into a room and suddenly slams into a table that he did not see. As the viewer, you might not catch immediately that the table appears the moment that he runs into it; or further, that it was there all along but disappeared when a character walks past it moments prior. Was Meirelles trying to sell the dystopia of this place by making the atmosphere of the film feel just slightly askew?

If so, it’s beautiful and technically proficient, but sadly lacking the heart that could really make the story work. There’s a cluster of scenes late in the novel wherein the doctor’s wife finds a store of food in a basement where nobody else has searched. Her journey there is complicated by the darkness of the room, a sensation that she has heretofore not had to concern herself with as the only person who has not lost their sight. ←Not a spoiler Add to this the pain of having to take care of those who she has banded with, the weight of the sacks of food she tries to carry back, the fear of being found out, the desolation of being alone when she loses her way. It all combines together to build a heartbreaking image. The same scene, in the movie, plays out more like it came right out of a zombie flick. She dashes through the aisles as the blind turn their noses in the air, groping forward for where the smell of food is coming from. She screams and tumbles out of the store and the scene is shown from a long-shot to get the entire struggle into view. The myriad emotions fueling the moment in the novel are pared down to one in the movie: get away, don’t get caught.

It’s not difficult to see the parallel between the chaos in the asylum and that of the rest of the country. When we see the cities, filled with blind people, the streets are littered with trash and broken vehicles and packs of mad dogs. There is no more organization in the “real world” than there is in the hospital that our central characters have been locked in. That’s clever, I guess, to point out the fact that the asylum is a microcosm of the world at large. And Meirelles is clever, I guess, with the subtle ways his camera plays with the viewer’s perceptions. But Blindness needs to be more than clever; it needs to be wrenching. The movie winds up being aesthetically intriguing, but structurally messy (everything progresses much too quickly) and emotionally flat. The book provides a lot of internal conflict for these characters; how can there be an absolute morality in a world that runs on pure chaos? The movie doesn’t entertain these thoughts, or does so in very broad terms.

Blindness is kind of fun to look at, but is hurt by a lack of focus. Having read Saramago’s book before-hand, I can more easily understand the connections between scenes and fill in the gaps that another viewer might not be able to. But having read the book also makes it easier to see these things which make the movie a lesser work. The characters in the movie are just characters, they endure their experience but otherwise are not really affected by it. There is no growth. The doctor’s wife can see, but what does she see?