Belle & the Beast: A Christian Romance 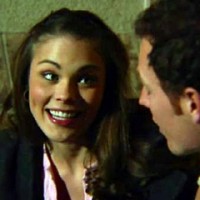 Belle & the Beast: A Christian Romance attempts to show the classic tale through the lens of Christianity, making its titular beast not into a literal monster, but instead into somebody who was wronged by the ruler of the universe and can’t let go of that grudge. But as we all are well aware, he will soon have Belle there to show him the error of his ways.

Eric Landry is known around town by the good Christian folk as “The Beast”. Why? Because he’s almost comically angry at everybody. He fires his assistant without cause and when his maid Mrs. Heygood presents him with a plate of fruit, he throws it to the side while bellowing, “You call this breakfast?!?” In short, he’s a ridiculous character. So it should come as no surprise that when Belle’s dad (a furnace-man, I guess?) accidentally knocks a priceless vase off of the mantle while working in Landry’s mansion, the Beast is far from pleased. He threatens to call Belle’s father’s employer to tell them what happened… the man will likely be fired because of it.

But Belle steps in. She will do whatever it takes (wink wink, nudge nudge) to get her father off the hook. All that Eric asks of her, though, is to work for him in the evenings. Actually, let me back up for a moment. When Eric tells Belle’s dad that he will most likely be fired, he pleads with the millionaire: “I can’t be fired!” I understand that the damage was accidental, but to destroy an expensive item in somebody’s home and then expect to be merely forgiven for it is amazing – to try to justify oneself by claiming that you have children to feed and therefore you ‘can’t be fired’ borders on despicable. In any case, Belle’s dad doesn’t put up much of a fight when she says that she’s going to be going to school full-time, working part-time at the orthodontics lab, AND working part-time for Mr. Landry due to his carelessness. And to tell you the truth, the massive workload never seems to affect Belle adversely… so I guess it was no big deal.

In any case, the Belle & the Beast story plays out pretty much as you would expect it to… but with a little bit of God thrown in for good measure. He starts out being angry all the time, but his heart is softened by Belle’s respect. Yes, the moral of the story is that all men deserve respect, no matter how childish and mean they may be. And hey, being respectful to men will always make them into better people. Or something. Actually, Mrs. Heygood (who would be better known as Mrs. Exposition) explains Eric’s ceaseless anger: he blames God for his wife’s death ten years prior. You see, they were driving along on the road when their front tire blew and they got into a horrendous car crash. Eric had to lie, injured, in the hunk of twisted metal next to his wife’s corpse for three hours before anybody came to find them. Is it unreasonable for him to think that his God had abandoned him?

Belle’s answer to this is yes, and she explains her reasoning with a remarkable degree of heartlessness: “Soemtimes bad things happen to good people.” That’s her answer for Eric. That’s why you should still trust in God. Because sometimes bad things happen to good people. There is no attempt made at addressing why an allegedly omnipotent, omniscient god would allow bad things to happen to good people. It is just presented as a given – which doesn’t answer Eric’s complaint in the slightest, but because this is a Christian movie it’s more than enough to change the Beast’s sinful ways. “You know, I’ve never thought of that!” Eric might as well have said. There’s also a rather sickening implication that the death of Eric’s wife was part of God’s plan (everything happens for a reason) so that he could meet Belle and fall in love with her. A god that plays with human lives in that way would be frightening indeed.

All of this is dumb, but doesn’t drag the movie into stupidity just yet. No, the subplot with Belle’s friend’s cousin Craig is what drives it over the edge. Craig is a creep, plain and simple. He was set up on a blind date with Belle, which she had to cancel because of her new-found obligations to Eric. Craig, in classic stalker mode, parks outside of the girl’s house in the middle of the night and calls her all the time asking her to go out with him “tomorrow, Saturday, or whenever”. She deftly avoids his advances, but he fails to get the message. He shows up on her doorstep with ice cream at one point and asks her if she is ready to settle down and be taken care of by a good husband like himself. Keep in mind that they have not once been on a date together. Still, instead of calling the cops on this creep, Belle feels that she is the one in the wrong and must apologize to Craig for ‘leading him on’ or something.

All of this leads to Craig finding out about Eric’s scheme with Belle. “Isn’t that extortion?” he wonders aloud. So yeah, you know what’s going to happen next. He’s going to get the authorities involved, get Eric arrested for a white-collar crime of passion… right? Nope. Apparently, Craig’s master plan is instead to call up Belle’s father’s employer while pretending to be Eric – in order to have her father fired, in order that she will assume that it was actually Eric that called, in order that she will run into Craig’s outstretched arms as a consolation prize. Brilliant?

The interesting thing, to me, is that the most religious notion in the film was spoken by creepy cousin Craig. When Belle finally asks him why he keeps pestering her about hooking up when he actually has no idea who she is or whether they would like each other, Craig answers: “Sometimes you just have to trust your feelings.” Isn’t that exactly what faith is? Belle blows off this answer as being ridiculous. Which it is. But if that big ol’ omnipresent God was looking down right then, I suspect he’d understand the reality of her underlying skepticism. Then again, nobody ever brought up the possibility that there is no god to worry about. Belle claims to have gotten over her mother’s death through God’s help… and a lot of time. Eric had alcohol, Belle had time. It’s a match made in heaven.

Ah. Belle & the Beast: A Christian Romance isn’t as hilariously bad as I would have liked, but it tries. It does try.