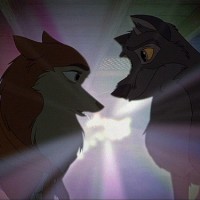 I suppose it’s not too surprising that Toy Story stole the spotlight from Balto when both were released back in the days when movies came on video-cassette. Seriously, I was amazed by the ads for The Land Before Time III before the movie. This really did come out a long time ago, huh? Still, it’s not hard to believe that Pixar’s baby would overshadow a simple cartoon about sled dogs, especially since the sled dog movie wasn’t made with computers (I can imagine the Roger Ebert of 1996: “Computer animation is a fad that’s bad for movies!”). That said, Balto can hold its head high because of its indomitable spirit.

There’s something to be said for the idea that, yes, above all else, Balto is a children’s movie. We start in the real world, but it’s not long before the cartoon takes over and suddenly there are talking dogs and joke-cracking geese and polar bears doing slapstick. I’d forgive you if you groaned upon hearing Boris the Russian goose, after being frightened, claim to have gotten “people bumps”. And yes, the rivalry between our half-wolf hero Balto and the evil pure-bred Steele is pretty one-dimensional. Steele doesn’t like Balto because he is threatened by him, and his pettiness sets up most of the conflict in the film. It’s interesting to consider that, in trying to prevent Balto from providing assistance with bringing medicine to the dying children of Nome, Steele was knowingly attempting to commit manslaughter… but the film doesn’t really delve into that too much.

Still, there are moments that rise above your typical animated fare. Balto gets much more respect from me than, say, any of the Ice Age movies do – there is a heart here, and the movie never stoops to the level of the truly moronic. A lot of what makes the movie work is in the way the characters react to one another. There’s a moment early on when Balto is chastised by one of the human characters, then to add insult to injury, he is called a “wolf” with disdain. It’s subtle, but you can see the hurt compounded on Balto’s face. Or take another early moment, when our hero decides to enter a race to prove his worth. He asks Boris the goose to wish him good luck. Boris chides that the wolf-dog doesn’t need luck, but instead needs some sense. But under his breath, he wishes his friend good luck nonetheless.

I realize these moments that I’m pointing out aren’t especially extraordinary. But sometimes movies are made in those small moments, and I’ve found that to be especially true with children’s films. They have the difficult job of being appealing to both the youngsters in the audience who just want to see some talking dogs and goofy polar bears, while also speaking to the parents in the audience who can only put up with so much silliness before going insane. Hence, we find that we have to settle for maybe one moment of sublime sweetness, such as when the characters in Toy Story 3 briefly hold hands and release their fears about the future. Balto, unfortunately, is not well-made enough that it can successfully bring those sweet spots to the forefront without seeming a little cheesy (e.g. the ‘Northern Lights’ scene), but it manages to capture a few short-lived moments of great humanity nonetheless.

Again, though, this is not enough to salvage the movie entirely. There’s a huge problem with pacing, as the plot kick-starts then slows to a crawl before rushing toward the finale. We barely have time to meet all of the characters before the central conflict is set up and Balto goes rushing out into the icy wilderness. The middle part of the film, wherein our hero leads a pack of sled dogs through a blizzard in order to get a special anti-toxin back to his hometown, should be the highlight of the film. To be sure, there are some close calls and grandiose action sequences, but too much of the middle section goes by in a blur, and then suddenly it’s over. I also feel that the live-action bookends were totally out of place – although I’ve never been a fan of live-action interludes (The Princess Bride and The Never-Ending Story irked me for similar reasons), but if it’s any consolation at least this movie doesn’t interrupt the story midway through to show a real-time reaction to the events. Further, the live-action scenes make no sense given that the story is ostensibly being told by a kindly grandmother, but then the film includes a large cast of talking animals.

Altogether, Balto is a light and pleasant little movie. There are a few very beautiful shots that utilize animated lens flares and there are some endearing moments between the characters. That’s not enough to give much boost to what is otherwise a fairly rote story with a clear strategy on getting from Point A to Point B, but it’s enough to make it enjoyable all the way through. It’s a cute movie, it made me smile a few times. I like that; I like this movie.