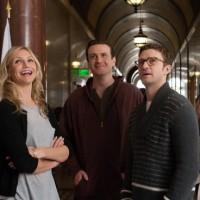 I wrestled with myself over whether it would be ethical to post a review of Bad Teacher, the Cameron Diaz/Justin Timberlake/Jason Segel comedy that, according to IMDb is set for a June 24 release this year. I was offered an early screening by Nielsen, those folks who do research on television viewing habits, because they needed people to watch the movie and give some feedback on what they thought about it. No members of the press! The movie is still a work in progress, they said, it’s not yet been rated by the MPAA. When we got done with the viewing, they gave us survey forms to tell them what we did or did not like about the movie, whether we thought anything was unclear, and so forth.

But I’ve come to terms with the idea of posting a review of the movie despite the fact that it is in an unfinished state. I wouldn’t call myself a member of “the press”, as this site generates no revenue (yet!) and its traffic comes mostly from friends and friends of friends. It wouldn’t be any different than if I wrote the review on Facebook, at this point, which is what I would do if I hadn’t paid money to get this mecca up and running. My vision for the site is one thing, but for all intents and purposes, at this moment in time I am still mostly a private individual expressing my views on a film that I was lucky enough to see.

So, now that we’ve soared past any ethical quandaries that might have held us up, what of the movie itself? We follow Elizabeth Halsey (Diaz), a junior high school teacher who is extremely superficial. She intends to quit her job, as she hates both the students and her fellow teachers, in favor of marrying into money – but when her marriage plans fall through, she winds up falling back on the only career she knows. Comparisons to Bad Santa are inevitable, not only from the title. Halsey is not only a terrible educator, but a lousy person in general. She consciously avoids getting close to her co-workers, hurling insults with malicious glee, and drinking and/or getting high on the job. She plays movies in class because she seems to be constantly nursing a hangover. The only times when she perks up at all are when a substitute teacher who comes from Old Money (Timberlake) arrives at the school; and though she tries to hide it, the physical education teacher Russell (Segel) seems to find a way under her skin as well.

I’ll admit up front that I didn’t have high hopes for the movie knowing that Diaz held the title role. The surveys after the movie asked for responses to the film, and one thing that  I found myself repeating was the phrase “pleasantly surprised”. I’d never have called myself a fan of Diaz’s previous work, but she showed a different side by committing herself to the role of such a mean-spirited and selfish person, though the film redeems her somewhat by having a softer side that comes out in brief glimpses. Jason Segel, fresh off of the television show “How I Met Your Mother”, is enjoyable enough, and Timberlake has proven his muster, most recently in director David Fincher’s Oscar nominated The Social Network. So the one wild card in the deck, really, was Diaz – and she proved unquestionably that she can hold her own as the driving force behind a dark, and at times bawdy comedy.

Halsey is a character who can light a bong on a stovetop on Christmas day, oblivious to the holiday. She will spit out the cookies that a student brings as a gift and tell the student to her face that they are disgusting. Like Billy Bob Thornton’s Santa, she’s a creep with a hidden heart of gold that keeps her from being totally unlikeable. It doesn’t hurt that the movie surrounds her with brilliant bit players who serve as icing on the cake. Phyllis Smith (from “The Office”), especially, is a gem – she plays the foil to Diaz’s awful Halsey, eternally kind and blissfully ignorant of her the way her friend uses her. Many of the funniest moments in the film come from Smith (one great scene involving a choice of milk had me grinning). John Michael Higgins, David Paymer, Thomas Lennon, Matt Besser, and Eric Stonestreet are all spectacular in their respective roles. Stonestreet (of “Modern Family”) is another real stand-out playing a character that is wildly different than the one he’s grown famous for. Dressed in a black leather biker jacket and with a five o’clock shadow, he’s a bizarre roommate for Halsey. “You wanna get drunk?” he asks with enthusiasm, slamming a bottle of whiskey in front of the teacher before walking out the door. It would be a shame to forget about the child actors, whose interactions with the adults (Segel, in particular) were all extraordinary. It is only the “good” teachers who treat the students like children, while the ones with less to lose tend to act around their students just as they would with anybody else.

Yes, the movie becomes much too formulaic as it progresses. There’s really no question about where the love triangle between the three teachers is heading, and it gets there with few detours along the way. When asked for titles that might be considered similar to Bad Teacher, my mind immediately went to Role Models. They’re nearly identical in a lot of ways, although of course the specifics are much different. Both tell stories of people who didn’t get where they wanted to be in life, wind up working against their will with precocious children who help them to see the light, and everything comes together in a heartfelt final act. Of course, Halsey manages to bring the heart while retaining her bad streak – she does the right thing, but only by immoral and certainly illegal means.

There may be things that are added to or removed from the movie before it hits theaters officially, but it’s difficult for me to imagine that the overall feeling of the movie could be altered much unless it was edited down dramatically. Bad Teacher benefits greatly from having splendid actors in remarkable roles, but it falters in hewing too close to a traditional story arc that leaves little room for excitement. Scene-by-scene, the movie is sometimes extraordinary; overall, it tends to feel disappointingly generic. Still, I’m definitely excited to see it again in its finished state.