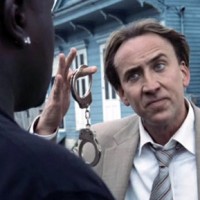 As a Nicolas Cage fanatic, the trailers for Bad Lieutenant: Port of Call New Orleans looked to me like the epitome of Cage weirdness. He plays an unethical cop, always high on narcotics, always spouting the weirdest lines, always seeing iguanas where they ain’t no iguanas. In short, it looked like a masterpiece. Unfortunately, I forgot that the movie was being helmed by Werner Herzog. I’ve only seen two of Herzog’s other films – Fitzcarraldo and Rescue Dawn. I liked the latter more than the former, but overall I haven’t really gotten a great impression of the director despite his reputation as, I dunno, a great director or something. All of this is to say that although I love Nicolas Cage in this movie, I didn’t like the movie so much.

I can’t really put my finger on what it is. Maybe it’s the feeling that none of the plot really seems important. Lt. McDonough (Cage) is tracking down a killer who goes by the name of Big Fate… but it doesn’t really matter all that much. Then there’s a subplot about his relationship with a prostitute (Eva Mendes) which also seems irrelevant. I mean, they spend a lot of time together and talk and share a few choice intoxicants, but nothing they do seems vital.

Yeah, that’s the phrase that I want to stick out in the reader’s mind here. Nothing seems vital. It’s hella fun watching Cage throwing himself into this role. I love it when my man plays a real character. Compare this to 2009’s earlier release, Knowing, where Cage is pretty much just playing himself. Here, he’s over the top and over the edge and it is pretty damn fantastic. That’s what makes the man such an enjoyable actor, and it is certainly what makes this film shine. When he shows up hidden behind a door (and shaving?), it’s a delight. When he goes into a weird, coked-up series of half-threats directed at a bunch of hoodlums with guns, it’s magnificent. When Cage is on the screen, it’s marvelous.

But the movie! Eh. The movie fails to deliver, and maybe something about that comes from the fact that it’s not very well hinged together. McDonough gets injured somehow in the prologue of the film, but that injury is never really explained. Was he really injured? A big deal is made out of the killing of some Senegalese immigrants… well, in the synopsis here a big deal is made out of it. But in the movie, it’s not really brought front and center. Is that supposed to be his driving force? Or is his driving force simply the fact that “he likes to get high”, as McDonough’s partner Val Kilmer suggests. What keeps him on the straight and narrow in his career even though he’s veered so far off of it in his everyday life?

In short, see this movie.. if only to remind yourself that there is a Nicolas Cage out there that is one hundred times better than the one in Ghost Rider. We all need reminded of that sometimes.

One Response to “Bad Lieutenant: Port of Call New Orleans”