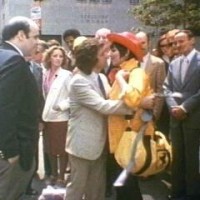 To begin Round II of the famous Letter Game here at Glasgow to the Movies, I gave myself a challenge: Arthur. It’s not that watching the movie was a challenge: both stars Dudley Moore and Liza Minnelli were adorable together, and the relationship that the millionaire alcoholic Arthur and his father-figure/butler Hobson (John Gielgud, in an Oscar-winning role, believe it or not) have together is very touching. It’s not that it’s a challenge to determine how I feel about the movie: it’s pleasant, occasionally quite funny, sometimes sweet and not over-long. It’s not that it’s a challenge to determine which moments were my favorite: Moore’s exaggerated drunkenness is always winning, making him the most lovable drunk that I’ve ever seen. No, the reason that Arthur is a challenge is that I’ve said everything there is to say in this first paragraph.

Can I stop now?

I think that the problem I’m having is that the movie is, for all intents and purposes, a fairly standard romantic comedy. I have alluded toward this already but I remain somewhat baffled by it, and that is the fact that Arthur won TWO Academy Awards. The film was re-made in 2011, and though I have not seen the remake, I can’t imagine that it is deserving of such an honor… and I honestly can’t imagine how much different it could be than the original. Perhaps I’m underestimating the depths to which popular film has sunk in thirty years. There are two basic plots here, both telegraphed from the very beginning. The first involves our huggable drunk Arthur being told that he has to marry the blandly-named Susan Johnson or else risk losing his inheritance – nearly a billion dollars, though Art chews through the cash like cotton candy so it’s probably not an inheritance that will last him much longer. Our inebriated hero is thrown for a loop, though, when he falls immediately in love with a petty thief named Linda (Minnelli). Uh oh, now he’s been placed in the perilous position of having to choose between gobs and gobs of money… or puppy love. Meanwhile, Hobson keeps coughing ominously while those around him ask, “Have you seen a doctor?” I’m only surprised that there wasn’t a moment in the film where somebody directly commented upon an approaching storm, only as a metaphor really.

With that said, though there are several moments of good cheer and a great sense of familial spirit between Arthur and Hobson specifically, things happen all too swiftly to take seriously. Susan Johnson isn’t a character so much as a prop, foolishly smitten with Arthur even as he treats her horribly. The two fated lovebirds have the requisite misunderstanding-forcing-temporary-breakup, then reunite with a shocking lack of emotional terrain covered. What I mean is that they seem to simply fall back into one another’s arms without much effort. Hobson’s departure is sudden and unsatisfying, given the depths of the relationship that he had with his employer/son-figure. And Arthur’s grandmother, who places the heavy crown of arranged marriage on our hero’s brow, and who is described in the Flixter.com summary as being “iron-willed”, loses that iron will at the drop of a hat.

But our three main characters stay resolutely uniform in their character. Hobson is a jackass to everybody, including Arthur, but nevertheless loves the man-child dearly. When he insults Linda, as a matter of habit, and Arthur takes offense, the older gentleman realizes the mistake he has made and apologizes immediately. He is tough on Art, but reinforces the truth that he cares deeply about his safety and security. Where Hobson’s steadfast rudeness rarely wavers, it does seem important to point out that Arthur’s alcoholism seldom varies either. It’s true that he makes some attempts at cleaning himself up, but he tends to return to the bottle in moments of frustration. I’ve heard that one change that the 2011 version has included is that it makes certain to refer to Arthur’s dependency on alcohol as a moral failing, as opposed to a hilarious quirk or even a serious illness that should for which he should seek treatment. While the 1981 version of the story certainly doesn’t glamorize or encourage Arthur’s habit, it does allow him to have it without judgment. Okay, maybe it does glamorize it a bit: through most of the beginning of the movie, I was thinking that maybe I should think about making my go-to drink scotch rather than whiskey, taking a cue from the protagonist. For the most part, though he is indeed hilarious while intoxicated, the film does show us that Arthur can hardly control his basic body functions – he stumbles around, falls down, can barely stand up-right; he is looked down upon by people who see him in his drunken state, unable to remember simple words, always in danger of vomiting all over the place. I think it’s easy to see those things, even as we smile at his cah-razy hijinks. And again, the movie allows Arthur to be a drunk – albeit a regretful drunk – without calling him out as a horrible deviant (I suppose it helps that the only time he gets behind the wheel is on a closed course). I’m not sure why I think of it as a mark in the film’s favor that it treats its central character in this way, except that it feels like a singular facet of a show that (aside from its sharp humor) seems to take roads that have been and are still being travelled.

The other Oscar that the film won was for its musical score. I don’t have anything to say about that because I did not take notice. Similarly, I did not take much notice of the directorial style or editing, didn’t see anything that jumped out at me from the cinematography either. Arthur is not an experimental film, not one meant to challenge the viewer to think about life in a different way (other than maybe to imagine what it would be like to be extremely rich). This is not a movie which seeks to cause friction with genre conventions in any way. All it wants to do is be likeable and sweet. It accomplishes exactly that, so I’d call it a success; not a rousing success, though. The film meets expectations, is satisfying, and satisfied to achieve only that.