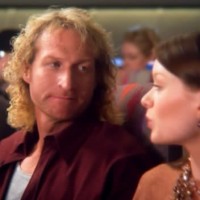 Maybe it’s just exhaustion from watching the torture that was The Perfect Stranger (TPS), but I had much less patience for its sequel – Another Perfect Stranger (APS). Of course, there may also be the fact that the sequel was not as focused on combatting common arguments to Christianity as it was about fine-tuning the idea of what Christianity is all about, e.g. how exactly does God love us?

APS begins with five minutes of scenes from the original film, which was mostly an hour and a half of two people talking over dinner anyway. So I don’t quite know why we needed five minutes of recap.

So. Okay. APS picks up ten years after the original movie. What’s-her-face from the first movie had a daughter, who has now grown up into an art student who is preparing to go to college. She is taking a solo plane flight to Oregon in order to check out the campus, and wouldn’t you know it – Jesus decided to take a day off of making sure the world is all in order so that he can go on a plane right with a, what, seventeen-year old? Creepy, but okay.
Actually, first, Sarah gets into an argument with a fellow passenger who is trying to convince her that God exists. He does what apparently all Christians do when trying to argue, and that is saying, “Let’s just say that God exists.” The idea is that once you quote-unquote “admit” that God exists, then you accept related assertions (e.g. Jesus’ sacrifice is a great gift), which in turn means that you accept that God exists and Christianity is right! It’s a circular logic, but it’s all they got. So this guy asks Sarah to assume that God exists, backward though it is, and concludes, “Now we’re talking about reality, right?” Is that really how you think you’ll convert people to your religion? Really? Are you really that stupid?
Of course, this fellow passenger is quick to point out that he’s not talking about a religion, ha ha, no no, he’s talking about a relationship. I don’t really understand what the idea of this old line is. What are they expecting? OH! A relationship? I totally misunderstood! Tell me more about this Jesus! And thank you for clearing that up! Sarah won some points with me for shooting back at her fellow passenger: “You’re talking about God. That’s religion.” BOOM!

As Sarah is losing her cool, suddenly she notices that she’s sitting next to Jesus. But she won’t discover that it’s him ’til Chapter Three! Jesus begins telling her how much he hates religion, because it’s a relationship, not a religion… but he doesn’t tell her that just yet. All he says is how much religion sucks, and he’s right about that. Religion breeds slavery, hypocrisy, superstition, and pointless customs that waste everybody’s time. Right on, Jesus. I’m with you there. He continues, saying that with regard to religion, self-righteous leaders focus on rules which people cannot possibly keep and then feel guilty for not achieving. Yes, Jesus! That sounds like exactly what you were preaching about in TPS! Did you finally come to your senses? Have you thrown out all that bullshit that you corrupted Sarah’s mother with in the previous movie? Do you feel some measure of guilt for ruining this girl’s life, since her mother takes her religion so seriously that she has turned her back on her daughter?

No such luck. It’s not long before Jesus is doing the same goddamn thing that the other plane passenger did. “Let’s assume that there is a God,” he says. Oh, joy.

Of course, as I think I mentioned before, this time Jesus is focused more on fine-tuning his arguments from before. He talks about humans being made in the image of God, beaming when Sarah describes God as in great shape. Seriously, Jesus, why are you going after jailbait?
Never mind that. Sarah mentions that most people treat other people like dirt, so does that mean that God is evil, since we were made in the image of God? Jesus explains that there are two choices here: either evil is a part of God or the reason evil exists is because “something went wrong somewhere”. He never really tells us which one is true, and he leaves out choice number three – God doesn’t exist – but that’s because he has already assumed that he does. He also doesn’t explain how something could go wrong somewhere, if God is all-powerful and all-knowing and all-good. But, of course, even if you assume that God is real, you can’t very well argue that the Christian God is good. If you believe the Bible, God has killed more than 2,000,000 people – and that’s not including the unnumbered instances like the, ahem, Great Flood (http://tinyurl.com/godkills). But he sorta kinda didn’t really kill himself because he loves us so much! So, you know, there’s that.

Jesus is a pretty manipulative bastard. At one point, Jesus calms Sarah by saying, “I’m not telling you what to think, I’m just helping you form the questions.” I kid you not, about two minutes later, he is trying to convince her that she is unfulfilled without a relationship with Jesus. Do you feel fulfilled with your art? Well, yeah, mostly. Would you feel fulfilled if you had a new Porsche? Direct quote from Jesus himself: “The answer is NO.” You’re not telling her what to think, eh? He continues, seeing that Sarah isn’t really buying his magic act: “There HAS to be something that goes beyond the realm of the logic of the physical world.” Wha-? How can you argue against that? Why does there HAVE to be something like that? Answer: “I don’t know, it’s outside the puny logic of the physical world.” Yeah, there’s a name for that: lies lies lies. Sarah’s not so quick to pick up on this, amazingly, and wonders how we can believe in something outside of the physical realm without seeing it somehow. Jesus says that you have witnessed undeniable proof of God’s existence. Have you ever seen a newborn baby? That’s God speaking. Have you ever been to Lake Michigan? That’s God speaking. Wow, that is undeniable proof of God’s existence.

It’s at this point that Sarah lets loose a whopper of a secret, something much worse than her mother’s “I hate God ’cause he let my dad die” thing from TPS. Sarah says that the really main reason she doesn’t believe in God is that she was date-raped. She was at a party and there were so many people there, and some guy took her to a bedroom, and nobody even knew she was gone, and… and how can there be an all-powerful, all-knowing, all-good God if that sort of shit can happen?
Jesus pauses for a moment and acknowledges that, yeah, getting raped sucks. But – wait for it – it’s all part of God’s plan. BOOM! Way to be a jackass, Jesus. Seriously, way to go. God willed you to get raped, don’t blame me. It only gets more incredible. He tries to comfort the now visibly upset Sarah by telling her that one day, all evil will be gone. Why not now, then? The bad people will be punished and the good will be rewarded, he assures her. But wait, didn’t you tell her mom ten years ago that nobody can do anything to get into Heaven? That it’s all about the relationship? Make up your fucking mind, man.
Sarah, again: even if that’s true, how is God good since the world is still so screwed up? Jesus claims that God is being merciful, since he could just cast us all down to Hell right now for not loving him enough.

Which leads me to final exchange before the plane lands. Jesus explains to Sarah that the Bible is God’s Word – it has all the facts about God that you need in there. Furthermore, it’s a love letter to the human race. Sure it is (http://tinyurl.com/godkills). God’s love is perfect, Jesus claims. Sure it is (http://tinyurl.com/godkills). Besides that, what exactly is ‘perfect love’ here, anyway? This is another tactic of Christian apologists – they will create new terms without fully defining them, or when caught in a rut will change their own definition of things. Suddenly the Bible isn’t to be taken literally, even though I’ve been using it literally to argue with you for twenty minutes. Things like that. Now God’s love is “perfect”, and the only thing Jesus says to explain what perfect means is, “a love greater than your parents have for you”. So let’s think about this. What would be perfect love? Certainly unconditional, right? Do I need to paste the link again? Guess so: http://tinyurl.com/godkills. If that’s perfect love, I’d hate to see an imperfect love. Damn.

But the final nail in the coffin comes when Jesus does what he did for Sarah’s mother so many years ago: he shows her his stabbed-through hands. So much for faith, huh? Dropping hints about being able to speak every language and knowing intimate personal details about her life and then the nail-marks in his arms… it’s no wonder that Sarah believed he was Jesus – she saw actually PROOF. Of course, she’s still too stupid to realize how weak his arguments were. But still, he offered her visual proof. What happened to faith? I guess God has no problems with bending the rules every once in a while (http://tinyurl.com/godkills).

When I got done watching this movie, I thought that it wasn’t nearly as disgusting as TPS was. But you know what? Yeah, it is. Just as stupid and evil and stupid again. This moderate Christian stuff pisses me off about a hundred times more than the obviously idiotic fundamentalist films, because many many more people will fall for the trap. At least I can take some comfort in the knowledge that very few people will actually watch this movie.

P.S. Who was that blurry guy in the blue shirt in the background? His terrible performance is the real reason this movie gets a half star.

4 Responses to “Another Perfect Stranger”