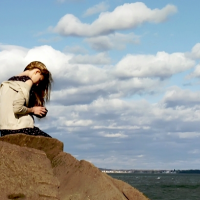 When the Swedish vampire movie Let the Right One In was released, there were warnings from fans of the film to those who had not yet seen it: this is not your typical vampire movie. It’s a slow-burning story of awkward, intense friendship. More than once, I heard the phrase “the anti-Twilight” bandied about. Similarly, though I’ve only seen it once, I really enjoyed the even more methodical French zombie film They Came Back. Once again, it’s a movie that must come with disclaimers about its horror/science-fiction base, because in this world there’s more concern over the effect that the return of thousands of people will have on the economy than on whether they’ve come for our brains. This brings us to Another Earth, a science fiction movie in name only; a twin Earth, complete with carbon copies of all of our planet’s inhabitants (animals and plant-life included, I wonder?) appears in the sky, but the characters are too busy feeling sorry for themselves to gather into any excitement.

The concept is sound, and thinking about it reminds me of why I was interested in seeing the film in the first place. Rhoda (Brit Marling, co-writer), a seventeen-year old who has just been accepted into MIT, has a few drinks and then gets distracted by the new-found planet on her drive home. She plows into another vehicle, killing two of the passengers but leaving John Burroughs (William Mapother, “Lost”) to cope with his new life of solitary confinement. Rhoda feels equally confined, trapped in the present that her actions have led her to, when a few altered choices might have led her down a different path. Instead of working as a high school janitor, she might be one of best minds at one of the top schools in the country. So instead of being a sci-fi tale about travel between the two planets, the second deemed “Earth 2”, instead the movie is a philosophical meditation on the immense weight of our choices, of learning how to cope with reality as it is. Or rather, that’s what the movie would like to sell you on. What’s actually provided is a grating mumblecore picture about feeling pitiful, led by actors who are expected to carry the film with a minimum of dialogue. The intent is to make a movie about the emotional journey of these two characters rather than a physical journey between planets, but the actors aren’t able to convincingly evoke the heady concepts therein. The film falls flat; the absurdities of the surrounding plot become distracting.

After learning the name of the man whose car she hit that fateful night, Rhoda goes to his house with full intentions to apologize. Why? What goal does she hope to accomplish by doing this? Later in the film, she says aloud that she wavers between believing a) that the things she does are done for the sake of the man whose life she ruined, and b) believing that they may be to ease the demons racing through her own mind. This sort of inner struggle is not apparent in the girl’s previous actions (unless we are to take her stone-faced stares at him as sign of her emotional turmoil). She arrives at his house, loses her nerve, and tells him that she works for a cleaning service offering free trials. Despite such a ridiculous premise, John invites the girl in and she begins visiting him weekly – slowly chipping away at the rough exterior that the sudden death of his wife and child have left him with. During this time, Rhoda is also cleaning his house so that we can more easily see the symbolic cleansing that Rhoda’s presence has on her victim. But the question looms overhead constantly: will she reveal her true identity, and if so toward what purpose? Either way, it appears entirely selfish. She either does not tell him that she is the killer, allowing his clean house and new, positive demeanor to serve as an unofficial recognition of her apology… or she tells him the truth, he rages at her, and she feels relieved to have finally confronted the issue head-on.

These aren’t thoughts that the movie explores with any frankness, however. Instead, we watch as the mostly silent pair play video games together or drive in the car with one another, talking about what they would say to their doppelgangers on Earth 2 if they were to ever meet. They remain largely expressionless, except when the girl’s eyes widen at the mention of John’s former family. It’s hard to understand what Rhoda does for John, other than exist, to break him out of the cloistered state he starts in – there is no special bond in their relationship aside from the fact that she is there weekly, and if the mere presence of another human to have contact with is what the man needed all along, the film does very little to make this clear. Even more outrageous is the relationship Rhoda has with a wise old Indian man at the high school; he talks to her as though speaking from another plane of existence, but there’s no discernible reason he should have any particular interest in the girl (aside from the fact that she is the main character). Some see his existence as largely metaphorical, but even in that sense he accomplishes little because Rhoda’s short emotional range makes her “journey” uninvolving.

I am refraining from mentioning the scientific impossibility of a planet being so close to our own without throwing our own orbit wildly off balance and frying all of our planet’s inhabitants alive. I’m mostly willing to suspend my disbelief there, although it’s more difficult to do with regard to an essay contest to win a trip to the second Earth. Once again, it’s something that serves as both metaphor and reality – a ticket to the other planet representing the concept of “forgiveness” or maybe “acceptance”. It doesn’t fit into reality, the idea of a transferable ticket to outer space being given out on the basis of who can prove the most pitiful. Nor does it work as a metaphor. Well, I mean, it does work; it’s just so literal and forced that it comes across as lazy. Instead of a gradual, engaging build of two characters toward one another, toward mutual understanding, this is a film which throws its characters into the places it wants them to be and tells them what to do.

Aside from a final scene that works perfectly on a visceral level as well as in reference to the plotting of the film, there is little that Another Earth has to offer which is attractive in any way. Its characters stumble around one another, an occasional smile or fit of anger standing in for sincere emotional connection, and we are expected to be moved by this. There is a good movie that can be wrung from the film’s concept, there are heart-breaking depths which the film had the opportunity to explore. Another Earth nods toward those ideas, but ultimately fails to address them with the required intensity. It’s a journey of wonder, but not exploration.