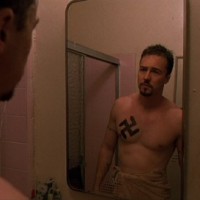 I recently got into an argument on the interwebz here about the merits of faith. My position was that requiring blind faith and selfless sacrifice were unnecessary evils – that any good deed can be done without the need for those qualifiers, and that requiring them is practically inviting disaster. After the debate, I watched American History X… which perfectly illustrated the points that I was making.

The story centers on Derek Vinyard (Norton), who begins the film as a deranged Neo-Nazi sent to prison, but before the first act is through, emerges from prison a changed man. Through the use of flashbacks shot in black-and-white, the movie shows us how unremitting his racial hatred was before his stint behind bars, and his strong desire to get his family out of the cycle they’ve been locked into now. He wears dark clothing in the past, white shirts in the present; you know, to better illustrate the transition. Because white equals… good?

Never having seen American History X prior to now, I knew only a couple of things about it. I knew that there was a brutal scene of violence (which I won’t say anything more about if you haven’t heard) and that it was a very good movie. Both of these things are true. It is a very good movie, although that fact isn’t really because of anything the movie does, so much as the sincerity that the actors bring to their roles. If I don’t mention any actor other than Edward Norton, though, I hope you will understand why.

Although the movie is two hours long, it feels under-cooked. As we witness Derek’s slow progress into the good guy that we are all rooting for, it turns out that it really isn’t all that slow at all. Perhaps that’s the fault of having to compress a several years long jail sentence into a few minutes, but for somebody with prejudices as strong as Derek’s were, it’s difficult to imagine that he would be won over so easily. There may be something to say about the idea that his defenses were chipped a little bit before he became a prisoner, but there’s no way to tell for certain. Mostly, he acts like a cartoon character who gets hit on the head with a frying pan and becomes an amnesiac – only to get hit in the head a second time and remember everything he had forgotten. If it weren’t for the extraordinary performances, it’s likely that this would have been a more glaring issue.

Continuing with my thoughts about the movie not being done, I was disappointed with the way the movie ends. Although the movie is narrated by Derek’s younger brother Danny, I never really felt that the movie was about Danny… even though he does get a whole plot-line of his own. When the movie finishes Danny’s story (he’s writing an essay about his brother in order to avoid being expelled from school), I felt cheated out of the rest of Derek’s story. What happens next?

There’s a critic on RottenTomatoes whose blurb about the film has been reduced to this sentence: “Any idiot can make us wince at the ugliness of beatings and shootings.” I can sort of see the idea behind that. It’s easy to try to loot drama out of just showing violence. And maybe American History X does that occasionally. But more often than not, the gut-churning sensations come not from the actual violence, but from the threat of that violence. It’s the fear, the tension, that’s what makes the movie rise above its problems with pacing and symbolism. That’s what makes the movie something astounding.

With this story, maybe another hour was called for? What we have here is a very good movie. A little more work and it would have been an electrifying movie.