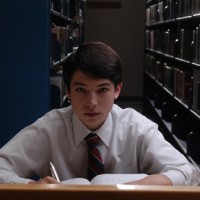 From what I’ve read about first-time director Antonio Campos’ Afterschool, the twenty-four-year old filmmaker has been heavily influenced by a bevy of artistes who came before – most notably Michael Haneke and Gus Van Sant. Having seen the work of both, notably Elephant and Cache, the comparison definitely seems fitting. Unlike those two films, though, Campos has dedicated his work to style entirely over substance.

The movie, at heart, is about a boy at an upper-crust prep school who inadvertently films the death of two popular girls from an overdose of tainted drugs. A lot of critics who write about the movie talk about there being a sense of paranoia that permeates the school after the deaths, but I’m not sure that’s true. In fact, aside from a couple of strange speeches given by the dean, nobody else seems all that torn up about the events much at all. But then again, the movie focuses on Robert (Ezra Miller) above all else, which only adds to the awkward irritation of the filmmaking.

I admit, I was drawn to the movie based on the film style. A certain pop culture website that I frequent often (and which shall remain unnamed) recently published an article which lauded the directorial efforts, especially in regard to one specific scene involving an attractive teacher. The article centered on the care with which the scene was set up: the specific images that were brought to the foreground or left in the background, the way the characters moved or the direction from which they had been filmed. It made the movie seem quite incredible.

At first, the viewing experience matched this. The movie opens with Robert sitting in the dark at his computer, a place where he can often be found. The room is so dark, the light from the computer is the only thing allowing the viewer to see anything on screen. It is measured, it is precise, the way this is set up. Robert is cut off from reality, he lives in video clips – he doesn’t function well with other people, but finds solace in short, funny videos on the internet. When the light from the computer provides all of the light in the scene, it functions metaphorically to stand in for Robert’s own viewing of the world. Similarly, the filmmaking style itself is a metaphor for Robert’s perception of the world.

Which brings me to the thing that makes the movie so unbearable: the directorial style. I’d like to applaud the fact that the average shot length for this movie has to be something like 50 seconds, but too often the camera pans to the left or right for no particular reason. It matches the way that Robert pans across a hallway for his film class project, filming simply establishing shots. If the convergence between the characters and the direction weren’t clear enough, there is a moment late in the movie where one character literally comments upon it. Robert creates a video that feels almost identical to the movie we the audience have been watching. “I’m not an editor,” a frustrated authority figure rumbles, “but that was the worst thing I’ve ever seen!” Doyagetit? Campos is making fun of himself!

I wanted to like the movie more, but it was too easy to be annoyed by the glacial pace and the self-satisfied filmmaking. A friend of mine recently watched Russian Ark, a movie about Russian history which is significant only for the fact that the entire film was shot in one continuous take. Yes, a 96-minute film shot in one take. But the movie itself was a bore, the gimmick being the only real draw. I feel similarly about Afterschool. I so wanted to get behind it, but it came across as too much gimmick and not enough meat. Anne Wollenberg, of ‘Film Star Magazine’, sizes the film up perfectly when she raises the complaint that “there’s no real emotional crescendo, no catharsis and no satisfying conclusion to Robert’s angst, which is only ever skirted around.”

Indeed, we’re supposed to see Robert’s perpetual silence and lack of emotion as some sort of commentary on both the character’s growth into adulthood and on the state of adolescence in the twenty-first century. He likes watching violent videos online and laughing at them, OMG kids these days are desensitized to violence! But unlike, say, this year’s Animal Kingdom, which used a character that was flat-lining emotionally to great effect, Robert’s silent stares aren’t hiding much. The actor unfortunately doesn’t carry the movie – nothing does.

I do think that there could be something grand that Campos could produce. Especially if he continues to work with cinematographer Jodie Lee Lipes, who caught some beautiful images in an otherwise stark film. But I also feel as if Campos is working against himself, too smug in being “different” to bring the dramatic arc home. Just like the way that Robert sees his surroundings, Afterschool functions a lot better when viewed one clip at a time than it does as a whole.