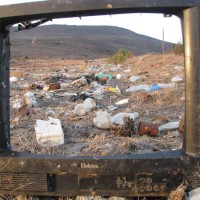 When it comes to documentaries that are trying to back a certain position, I am often turned off even by films that share my own viewpoints. The reason is that most of these sorts of docs tend to vilify their opponents by painting them to look like monsters.

What makes Addicted to Plastic different is that it does not do that. The movie tells its viewers all about the multitude of evils that have befallen the earth due to mankind’s over-indulgence in plastic, but it also goes out of its way to make it clear that the people who create plastic products aren’t intending to hurt people. A lot of the information about plastic products is similar to the bottled water documentary Tapped, so I kind of already had an idea of what to expect. In both films, the Eastern gyre in the Pacific Ocean is focused on heavily. This film does a better job of making the problem clear, though. We see a ship whose task is to wade through the water – miles from shipping lanes – picking up stray water bottles, trash can lids, and hundreds of other plastic items. This is not including the “plastic soup” that the water has become here. It’s disgusting.

The movie doesn’t show us this and leave it at that in the way that Tapped did. Instead, it goes on to introduce viewers to a series of people who are, get this, working on the problem. What Tapped said was that plastic was bad, end of story. Addicted to Plastic is conscious enough to understand that everything around us is composed of plastic in some way. Foam, polyester, styrofoam – these are all different forms of plastic. It would be silly to try to rid the world of the substance because it has proven extremely versatile and even more useful.

The problem is our ‘disposable lifestyle’, the fact that we use things once and throw them away. The stuff that gets thrown away does not decompose and only gets piled up in landfills. So we meet people who are working on ways to create biodegradable plastics. We meet people who are working on ways to recycle various bits of garbage – by turning it into an alternative for topsoil, or by reforming it into durable railroad ties. The movie tells about the deposit return program, where several states will give you five or ten cents back when you return your cans to a recycling center. States that institute these programs see a dramatic rise in people who recycle.

Where Tapped tries to set the bottled water industry up to make them look like fools or criminals, Addicted to Plastic lets a man who represents the plastic industry claim that most of the problem is that people are not properly educated about the ills that can arise from not taking proper care of your plastic products. The movie allows this statement to remain without editorializing it. To this movie, even the people who represent plastic have valid points to make. In addition, director Ian Connacher realizes that it’s hard to wrap your head around numbers and charts. To make the concepts discussed more palatable, he instead approaches all of his interview subjects with one specific question: Knowing what you know now, “how have you changed YOUR life?”

I hate to get too spoiler-y for those of you who might actually watch this movie someday, but it’s too heartwarming to leave out. As the movie is nearing its end, Connacher admits that the garbage problem that he had seen in the oceans and elsewhere was what had jump-started his interest in creating the documentary. What kept him going, however, were the positive movements made by so many people – so many, in fact, that not all of them could be included in the film. As the credits roll, we get the filmmaker asking each of the participants if they consider themselves to be an “environmentalist”. Almost unanimously, all of the respondents say no. These aren’t crazy tree-hugging activists. They’re people understand that there is a problem and have found a way to make money and create less waste.

What Addicted to Plastic is saying, then, is that you don’t have to radically change your life in order to make things better. You just need to do something, however little it is. Whatever you can do to make the world a little bit better, that alone is awesome. This is a position documentary that is different from the norm – it is motivating, rather than distressing. It’s got a positive and hopeful message; that is remarkable for a genre which typically relies on grim pronouncements of additional horror if you don’t change your ways immediately.

A hundred Michael Moores would still fall short of the excellence that is Addicted to Plastic.